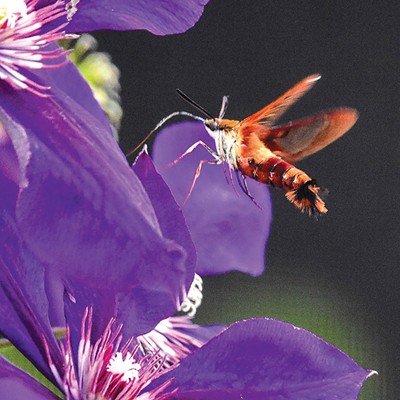 Rob Swanson is "enamored of anything that flies." In a recent chat with Seven Days, the former hang-glider pilot said he's in awe of the "mind-boggling biological perfection of birds and insects."

He also finds them "an incredible challenge to photograph in flight." But capture their speed and agility he does, drawing on years of experience photographing sports and other subjects for the Associated Press and the Burlington Free Press.

"You have to anticipate," Swanson said. "You can't wait to see the moment and then start shooting. You have to think, Where's that bird gonna fly? and prefocus." Digital technology helps, too, he said, especially when photographing hummingbird wings at 1/8,000th of a second.

For Swanson, a great shot tells a story, and the photos in this collection tell of "the beautiful interaction between the plant, the flower, and the insect or bird." He took many of them for his current employer, Grand Isle newspaper the Islander, but he won't take much credit.

"I often tell people, 'It's not really my work. I'm just plagiarizing Mother Nature. I see what she does, and I'm stealing it.'"

He hopes his thievery inspires viewers to protect pollinators of all kinds and to discover similar gems in their own communities.