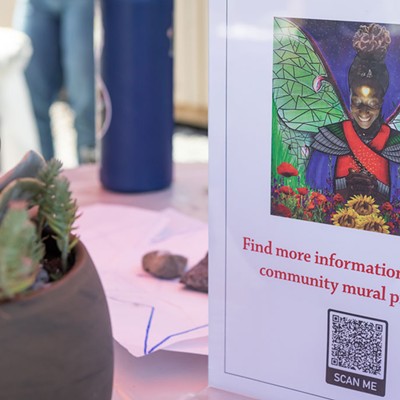 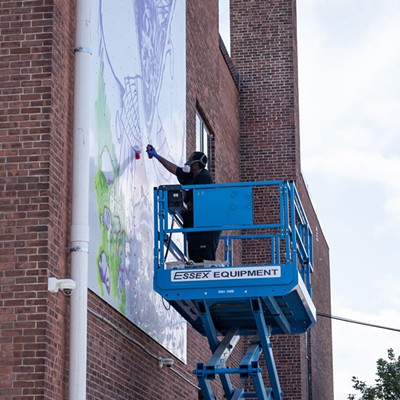 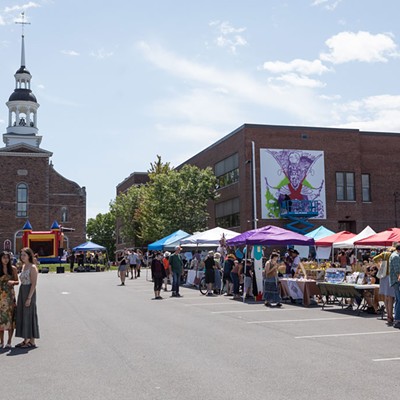 On Saturday in the Old North End Community Center parking lot, close to 100 people worked on pieces of a new mural, titled "Moringa the Medicine Woman," destined for an exterior wall of the center. The community paint day was integrated into the Ramble, a free annual event in the Burlington neighborhood.

As participants dipped brushes into yellow and green paint, Will Kasso Condry of Juniper Creative Arts stood on a scissor lift, wielding spray paint to fill the outline of the 20-by-20-foot mural. At tables below, his wife, Jennifer Herrera Condry, and their daughter, Alexa Herrera Condry, handed out stars, circles, crescents and diamonds for others to paint.

The three members of Brandon-based Juniper Creative Arts describe themselves as a Black and Dominican family collective with a mission to create art that involves and celebrates historically excluded communities.

"It is about giving visibility to people in public art," Jennifer said. "When you look around, most of the public art doesn't seem to reflect the full diversity of the Burlington community."

The image of a smiling Black woman with luna moth wings is part of Juniper's Afro-pollinator series. The inaugural mural in that series, "Kelis the Afronaut," was completed in September 2020 at Champlain Elementary School in Burlington's South End. As with that mural, the shapes painted on July 31 will be collaged together with 96 pieces previously made by Burlington grade schoolers to create the wings.

The Champlain Housing Trust, which owns the ONE Community Center building, commissioned the mural. A successful crowdfunding effort and match from CHT provided about $30,000 for the project. The community center houses organizations that serve residents of all ages and many cultural backgrounds, according to Michael Monte, the trust's CEO. "The mural is a reflection of what's happening in the building and in the community," he said.

The Afro-pollinator series is designed to radiate the positive power of joy.

Many public images of Black people in recent years have been designed to draw attention to tragedy, Will noted. "The Black narrative is more than just a single story. Our goal is to showcase us from a place of joy," the artist said. "Specifically, for the children to see themselves in states of pride, in states of royalty, of grace and dignity."

Correction, August 3, 2021: An earlier version of this story misstated the number of student artworks that will included in the wings of the mural. It is 96.