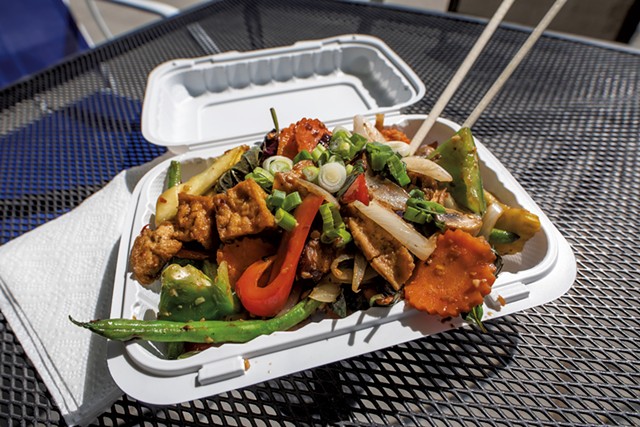 About a year ago, Seven Days launched Good To-Go Vermont, an online directory of takeout restaurant options. It's a pandemic-era platform designed to highlight and facilitate takeout dining.

But some places, including pizzerias and Chinese restaurants, have been good to-go forever. Who can possibly count the number of Friday nights at home with a pepperoni pizza and a six-pack, or an order of egg rolls and sweet-and-sour chicken with a fistful of fortune cookies? (I'll never forget the strip of paper I pulled from a fortune cookie one night, whose message in fading blue print read, "The position you desire will soon be yours." That's something you want to find out at home.)

For our family — and many others in and around Burlington — one restaurant in particular has been good to-go for a dozen years: Pho Hong, a Vietnamese restaurant in the Old North End.

Pho Hong is an order-by-number kind of place. Regulars, including myself, can get in a Pho Hong rut — meaning repeatedly ordering a meal you want to eat again and again. For us, that's No. 10, No. 15 with tofu, No. 21, No. 26, and the numberless mango salad, or goi xoai, that tops the appetizer menu.

"Sometimes people mix up the menu," said Jade Le, daughter of the owners. "We have to make whatever they order: 21 and 20 added together and divided by two."

Everything is made to order in a small kitchen that's visible through a window in the dining room. On a busy night, six people work in the kitchen. Le's role is to be "everywhere."

When I pick up an order, or on the occasions we have eaten in the Pho Hong dining room (closed during the pandemic), I love to peek into the kitchen to glimpse the high-wire stir-fry action.

"We have to make whatever they order: 21 and 20 added together and divided by two." Jade Le tweet this

This past year, as many Vermont restaurants adopted an online ordering system to accommodate the demand for takeout, Pho Hong stayed true to its roots: ordering by telephone.

A little old-fashioned patience can come in handy — and is worth developing — to place an order at Pho Hong. On a Saturday evening in February, we called about a dozen times over 20 minutes before we got through. Other times, the connection is made in a call or two.

Most of the people who work in the kitchen speak Vietnamese, Le said. The front-of-house staff that takes telephone orders and packs the takeout (or serves it, in normal times) speaks English. But they know some Vietnamese, including menu numbers, for communicating with the kitchen, she said.

For non-regulars, I should elaborate that No. 21 ($11) is stir-fried Japanese eggplant mixed with a heaping mound of accompanying vegetables, including green beans, wedges of red and green pepper, quartered mushrooms, sliced carrots, and yellow squash thickly cut on the bias. This generously portioned meal comes with rice or noodles and a choice of protein.

The mango salad ($5) speaks for itself, its voice an alluring blend of sweet and tangy: matchstick-like strips of mango and carrot, vibrant in color and flavor, dressed in lime juice, garlic, sugar, red chiles and peanuts.

No. 15 ($11) with tofu is a stellar dish perhaps best described as a hot-and-cold salad. A base of rice vermicelli noodles is topped with deep-fried tofu triangles, in turn complemented by crunchy raw vegetables and herbs: sprouts, lettuce, cucumber and mint. Crowning this meal are little egg rolls, sliced for easy eating, that add crispness and flavor. I can't think of a better "bowl" meal in Burlington.

In our house we consume pho, the traditional Vietnamese soup, in the form of No. 10 with chicken ($10.50 for a large). It's rich and steamy, with shredded chicken floating in a broth with scallions, onions and noodles. An accompanying bag of DIY extras includes a wedge of lime, bean sprouts, Thai basil sprigs and hot sauce.

The soup broth is made by Pho Hong's founders, now in their sixties, who immigrated to the U.S. in 1992. Dao Le, retired from his job as a landscaper at the University of Vermont, arrives at the restaurant at 3 a.m. to start cooking the stock — a five- or six-hour process, his daughter said. Later, Hong, who worked as a housekeeper, adds spices and seasonings. In the early years of the restaurant, they worked at Pho Hong and their other jobs, Jade Le said. Back in Vietnam, Hong was a food street vendor who dreamed of opening a restaurant.

"One day she decided to find a place, and we open it," Jade Le said. "And that's why we're here." Pho Hong closes at 10 p.m., but Hong is there well past midnight to clean.

"Everything has to be spotless before she leaves the place," Le said.

Hong trained the chef, 24-year-old Huy Tran, who's worked at Pho Hong since he came to this country six years ago. He runs a kitchen that fills 400 to 500 orders a day.

These are prepared and then passed to the front of the house, where staffers organize and pack meals that belong together, a feat of memory, timing and dexterity. (This task is juggled with taking phone and walk-in orders.) The crew up front might remind the kitchen that they're waiting on a No. 24, for example.

That No. 24 ($11.50), I discovered recently, is a beauty — a Vietnamese crêpe we ate the other night on a recommendation from the restaurant. I was fooled into thinking the fluffy yellow crêpe had egg in it. Nope, just rice flour, coconut milk and turmeric is in the shell that's stuffed with bean sprouts, shrimp, pork and onions. It's served with a tangle of lettuce and carrots, and house dipping sauce.

The tip to try the crêpe came from a counterman who's worked at Pho Hong since shortly after it opened. (He asked that his name not be published.) A couple of years ago, I approached the man with a story idea — a riff on a Seven Days feature called Grilling the Chef. I wanted to adapt it to him and title the piece "Talking to the To-Go Guy." I pitched it one afternoon as a line formed behind me.

Actually, he's very good. And so is Pho Hong to-go.