In May 2015, the Polka Dot Restaurant closed its doors after serving eggs and flapjacks for more than a half century in White River Junction. Just across the river in Lebanon, N.H., a young Cambodian couple was working to incubate the new food business that would, nearly four years later, replace the long-standing diner at 7 Main Street. They called it Phnom Penh, after their native capital city.

The summer after the Polka Dot closed, Sarin Tin and Lay Yi registered as vendors at the Hanover Area Farmers Market. Their Vietnamese-style banh mi sandwiches and spring rolls sold out weekly. "We had a lot of success," Tin recalled. "Our food is different from anything else around here, and we made everything from scratch. People really liked it."

Tin emigrated from Cambodia to the Upper Valley with his mother and sister in 2006, but it would take him nearly a decade to parlay his passion for cooking into a thriving business.

"I was not sure what I was going to do here," Tin said of his early days in New Hampshire. He went through seven jobs in his first year on U.S. soil. He worked dueling shifts at Wendy's and McDonald's, stir-fried rice at Peking Tokyo, served customers at Hotel Coolidge and Kleen laundry, and worked manufacturing jobs at New Hampshire Industries.

"There are a lot of jobs out there," Tin recalled. "I wanted to know what fit best."

Eventually, he landed at Hypertherm, a Hanover, N.H.-based company that produces state-of-the-art plasma-cutting machines, precision tools and machine parts. He punched the clock as a computer numeric control (CNC) operator for most of a decade and started the banh mi business when he began to feel restless. "I wanted to do something different," Tin said. "It was just way too long for me to stay at one place."

By the end of the 2015 market season, Tin and Yi upgraded from a market table to a small food truck — and expanded their menu to include dumplings and meats on a stick, among other Southeast Asian street foods. Most days, they'd feed the lunch crowd near the green in Lebanon, then restock and head north to Hanover, where the students at Dartmouth College kept them busy through dinnertime.

In 2017, Phnom Penh grew into a small Lebanon storefront. Tin and Yi added noodles, soups, stir-fries and curries to the menu and began catering events. "We decided to go a little bigger," Tin said, "so people could come and eat during the winter, too."

By day, Tin, Yi and their family members, including Tin's parents, sister and brother-in-law, rolled veggies into spring rolls, summer rolls and dumplings; they sliced, marinated and skewered strips of beef, pork and chicken satay; they fried rice and noodles and ladled broth into steaming bowls of pho, topped off with fresh herbs and crisp veggies.

"The food in Cambodia is really strong flavors — it's sour, sweet, spicy, salty," Tin said. "We make our food exactly like we eat at home. People know the flavor when they taste it; they know good food."

All the while, Tin continued working nights at Hypertherm.

Last year, he and Yi learned that the City of Lebanon planned to level their rented building in 2020. Phnom Penh would have to move or close up shop before demolition began, so its owners started looking for new digs. When Tin heard that developers were leasing the old Polka Dot Restaurant in busy downtown White River Junction, he was immediately interested.

"The food industry is great [in White River], and this street has everything people want," Tin said. "There are many different kinds of food, but they didn't have anything like us yet. We need to be the first ones to come in. It was the same thing in Lebanon."

The new location opened — with barely enough employees to staff the place — in November 2018.

Since then, Tin said, business has been good. Lunches are busy; dinners less so. "Evenings are not too bad," he said, "but we're new in town, and even though we've had a store just across the river, we're still new right here, so we don't have a lot of regulars."

During a late lunch on a frosty afternoon last week, sunshine glinted off an aging man's shock of white hair at the bar. He sipped a pint of beer — one of four on draft — from nearby River Roost Brewery. Asian-style lanterns glowed pink and orange overhead. On the back wall, the old Polka Dot Restaurant sign paid homage to the café's longtime predecessor.

Across the room, a couple sunk chopsticks into steaming bowls of pho and crunched through a plate of spring rolls. The soundtrack was a soft but upbeat mix of classic pop tunes and standards. 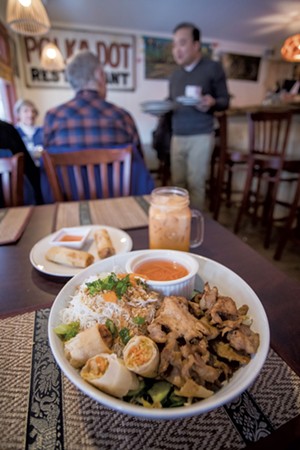 When Tin was preparing to open in White River, he said he was struggling to find workers. A sign in the window — "Help wanted, $11/hour" — indicated that staffing remains an issue. Friends had told me they'd experienced slow service at the new café, but with a toddler in tow, I hoped we could get in and out relatively quickly.

Restaurants are often at their best during the late-afternoon lull between lunch and dinner, and Phnom Penh's service was casual but brisk. A rust-orange glass of Thai iced tea ($2.50), sweet and swirling with cream, arrived within moments of my order. A pair of summer rolls ($3) followed in short order, cool and loaded with crisp veggies and a small pot of fish sauce for dipping, strewn with crushed peanuts.

Next, the fried dumplings ($3) were puffed up, blistered and fresh from the fryer. Their savory stuffing of cabbage and pork was redolent of ginger and garlic. And while the menu directs visitors to "ask for spicy," the crushed chiles in the standard sweet-and-sour sauce were strong enough to make their presence known but still palatable to the kiddo.

The day was cold, and most of the patrons who ambled in and out went for hot soups and stir-fries. Craving warmer days, I went for a cool "salad" of Vietnamese vermicelli noodles ($10.95 with pork). In a large bowl, a tangle of thread-thin rice noodles concealed sprouts, English cucumbers, carrots and iceberg lettuce.

With a sprinkle of fish sauce, Thai basil and mint, the dish was a delight to eat. Each bite was textural and fresh, with the ginger-scented pork a savory foil to the vegetable crunch and the herbs' pungent sweetness. The dish almost transported me to a warmer clime.

By the time I got to the bottom of the bowl — just as the kiddo began to finger paint with the fish sauce — I was full and happy. But I didn't want to leave without trying the Vietnamese che dau ($3) for dessert.

I ordered it to go but sneaked a spoonful before we left. The pudding-like blend of soft-cooked rice was studded with black-eyed peas and bathed in coconut milk. It was earthy and utterly unique.

And it was just what I needed to bolster my spirits for the drive home.

The original print version of this article was headlined "Fresh Flavors"