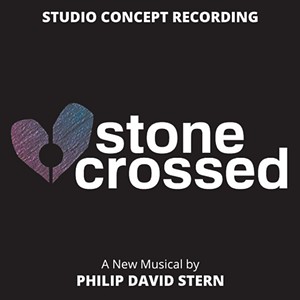 Writing a musical is no easy feat. It's simple enough to come up with a concept, and some composers may even venture as far as to write a song or two. But to write an entire work takes an immense level of commitment and talent.

To then get that musical into workshops and have a major label release a concept album is something only a handful of people achieve. Burlington is home to one of them: Philip David Stern.

Stone Crossed is Stern's newest musical. The composer and executive director of New York Stage Originals released the concept album in May 2021. The work tells the story of two young lovers who live on opposite sides of Arkose, a fictional land set in the Stone Age. Imagine a prehistoric Romeo and Juliet.

Like many projects in 2020, the album was largely recorded remotely. While indie-rock bands of four or five members could have recorded in basement studios with egg-carton-lined walls and USB-compatible microphones, Stone Crossed demanded something much more complex. A full vocal ensemble and a band that spans everything from French horns to acoustic guitars create an album so good it's hard to believe the musicians were located across the country. The production is solid, and the talent is impressive.

Many experienced Broadway actors perform on the tracks, a testament to the appeal of Stern's compositions. The performer who features most frequently — and who steals the show in this writer's opinion — is Antonio Cipriano, a young actor and singer who originated the role of Phoenix in Broadway's Jagged Little Pill. A clear and emotive tenor, Cipriano conveys the character's youth and longing perfectly.

The opening number, "In Stone," emulates musicals such as Sweeney Todd and Hamilton by employing a narrator to introduce the story. The track starts with a catchy, melodic motif that reappears throughout the rest of the musical and serves as a theme song for the two lovers, Stoney and Jewel.

Most of the songs in Stone Crossed are on the lighter side emotionally, but tracks such as "Euphoria" and "Breathe" near the musical's end seem to point toward a sadder, darker conclusion. But without access to the musical's narrative, it's hard to imagine how the story ends.

Stylistically, the work straddles the line between Broadway and Disney, reminiscent of productions such as Wicked and Dear Evan Hansen.

One can only hope that Stone Crossed follows in the footsteps of Anaïs Mitchell's Hadestown and finds a home on the stage — not just to support a local artist, but because it is a genuinely enjoyable work that deserves to be both seen and heard.