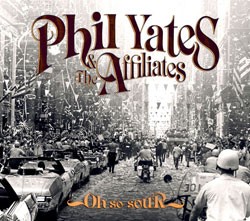 For the past two years, Burlington’s Phil Yates has somewhat steadily constructed a niche and name for himself in the music world, here in Burlington and beyond. Oh So Sour is Yates’ first full-length record with his backing band, the Affiliates. It is delivered on the perhaps-distant heels — depending on how long the last 20-odd months of your life have been — of Yates’ 2011 solo EP, Tumble Stairs, a contribution to a nearly high-profile compilation of Wkr Spgt — yeah, obscure — songs released on California’s Shrimper Records, and a digital single of Oh So Sour’s closing track, “Could You Be the One?,” released last spring. With their new record, Phil Yates & the Affiliates deliver for the first time a fully painted portrait of a singer-songwriter and his band.

The various instruments that populate and embroider Oh So Sour — multiple guitars, bass, Rhodes, drums, bullhorn, to name just a few — all fall effortlessly into place and time. But Yates’ lyrics, simultaneously tongue-in-cheek and openhearted, cause his presence to stand out to the extreme, at times reminiscent of the Mountain Goats’ John Darnielle, with whom Yates has played, and the Lemonheads’ Evan Dando. Lines such as “You’ll probably be happier when I’m gone / You can’t say that about your looks,” from “Pretty Girls” and “I’ve dug a hole and now I’ll dig an abyss” (“Three Cheers”), are just too good not to steal center stage. You can relate to Yates’ sad-bastard declarations without sinking pitifully deep into them.

It would not be fair to overlook the expert performances executed by the Affiliates. On tracks such as “She Has Your Name” and “Loaded,” they truly shine. Special kudos to the supplemental guitar work of Kevin Stevens and Raph Worrick (Dirtminers). Of course, lines such as “You can’t call it cheating when she has your name” (from “She Has Your Name”) often steal your attention away from the band.

Yates has described his music as “too folky for the rockers and too rocky for the folkers.” While this statement may be as true as it is quirky, it’s evident from Yates’ choice of lyrical content, structure and delivery that he’s a true folky at heart. He just happens to be a folky with a rockin’ band. The good news for Yates is that audiences are able to handle this synthesis a little better in 2013 than they could in, let’s say, 1965.

Phil Yates & the Affiliates celebrate the release of Oh So Sour on Friday. February 15, at the Monkey House, with support from Black Rabbit and Charlie Thunder. The album is available at philyates.bandcamp.com.