As Republican gubernatorial candidate Phil Scott shook voters' hands earlier this month at the Franklin County Field Days, he heard a radio playing. There it was again: another ad in which Republican rival Bruce Lisman was berating him.

Everywhere the lieutenant governor went before last week's primary election, it seemed he couldn't escape Lisman's barrage. By the time the August 9 primary came around, Scott himself was among those who thought his opponent's message was so ubiquitous that their race was going to be a nail-biter — or worse.

"I was preparing myself for a loss," Scott said last Thursday in a post-primary interview in his office at DuBois Construction, the Middlesex excavation company he co-owns with his cousin.

The numbers — Scott snared nearly 60 percent of the vote to Lisman's 39 percent — showed that his fears were unfounded. Solid victory aside, Scott did not come away unscathed.

Even as he accepted congratulations on his victory last week, Scott conceded that the fracas with Lisman showed he must get better at quickly and concisely countering accusations. Sixteen years in elected office — six as lieutenant governor and 10 as state senator — do not a battle-ready gubernatorial candidate make.

"This is going to be a challenge — personally, professionally and politically," Scott said. "I'm prepared to go into the next three months trying to get better at articulating our message."

But Scott said he's proud of the fact that when Lisman turned particularly vicious — accusing him of election fraud in the final days of their race — he didn't reciprocate. His closest advisers urged him to, he said, but he refused. Scott declined to reveal what they wanted him to say, but he revealed it "gave me that pit in the stomach."

Despite his primary victory, Scott starts his general election campaign with the question lingering: Can he stand up for himself?

As Scott often does, he answers with a racing analogy. He noted: You don't get to be the all-time wins leader in the late-model category at Barre's Thunder Road SpeedBowl by letting others run roughshod over you. 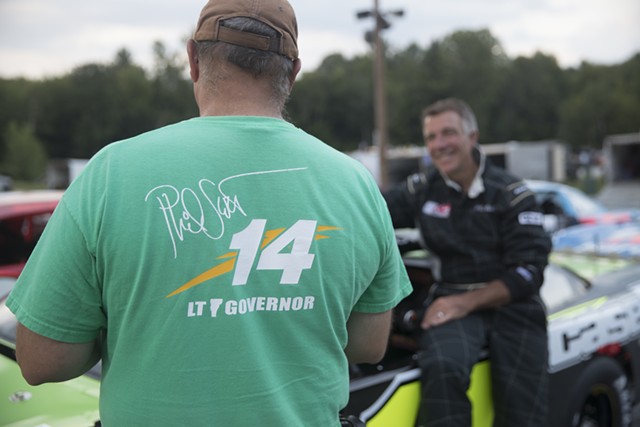 "Racing and politics are so similar," Scott said. "I've had my tires flattened. I still have more wins than any other driver."

In 25 years at Thunder Road, Scott racked up those wins, he said, not with a bull-in-a-china-shop approach, but by picking his spots, sticking to his game and not taking the bait from more aggressive competitors. At age 58 and despite his hectic campaign schedule, Scott ranks a highly competitive third in the standings this season.

"He doesn't push people out of the way," said Bill Fitzgerald of Morrisville, who's worked at Thunder Road for 40 years as the purveyor of race-day tires. "He goes around them."

Thursday night, two days after his emotional primary victory, Scott zipped up his fire-retardant racing suit, slipped into the driver's seat of his green-and-black No. 14 car, and sped onto the quarter-mile track. He will give up racing if he wins the governor's office, he said, but for now it remains a welcome weekly diversion.

Scott is so popular at Thunder Road that at a prerace driver's meeting, his competitors applauded his primary win. Between races, at least two fans handed Scott campaign-contribution checks, which he discreetly tucked into his racing-suit pocket.

In the second of his three races that night, Scott was steadily gaining on the competition when he pushed his Chevrolet to the outside and caught the outer edge of the track with his right front tire, which forced him to back off. Had the maneuver worked, the reward would have been big. When it didn't, he retreated to the middle of the pack. The move was typical of how Scott works for his opening.

On the campaign trail this summer, Scott may have held back for too long.

During one campaign forum, he referenced the national debate over how road construction is funded. With a growing number of electric and low-fuel consumption cars on the market, the traditional gas tax is not raising enough money, he said, and might need to be replaced at the federal level with a per-mile tax.

Scott admitted last week that he never saw it coming.

"I probably didn't take it seriously enough," he said. "I look back at that and wish I'd explained it differently. That was a mistake."

In political science, the general school of thought is that contested primaries are healthy for the eventual winning candidate, according to Middlebury College associate political science professor Bert Johnson. Candidates come out more experienced and with greater name recognition.

Johnson said that might be the case for Scott, who got his first taste of high-level political campaigning in the tougher-than-typical primary.

On the negative side, he added, "I don't think he hit upon a perfect punch-back."

In the general election, Scott is likely to face similarly blistering attacks, even if they don't come directly from Minter, who prevailed in a relatively mild-mannered, three-way Democratic contest.

Asked if she would pursue any of Lisman's criticisms of Scott, Minter said, "I am going to be running on my ideas. "

She said she would raise questions about his stances — on global warming, for example, which Scott has said could be attributable to "many different reasons."

"I believe climate change is real and caused by human behavior," Minter said. "I don't know what his plans are."

That doesn't mean Scott has heard the last of Lisman's allegations. The defeated candidate has since endorsed Scott and scrubbed his website of attacks, but the Vermont Democratic Party plans to echo some of the vanquished GOP candidate's points. Party executive director Conor Casey said they don't plan to employ such a harsh tone.

Nor is the party likely to tar Scott as being too chummy with retiring Democratic Gov. Peter Shumlin or too amenable to his health care proposals.

But it is likely to build on Lisman's argument that Scott's ownership in a business that bids on state contracts presents a troubling conflict of interest.

"I actually think it's an impossibility to have a true blind trust," Casey said of Scott's proposal to seal himself off from DuBois Construction as governor. Casey argued that the issue would carry more significance if Scott is governor, overseeing the executive branch, than it has during his time as lieutenant governor, in which capacity he has no control over state agencies.

During the primary, Scott failed to provide specifics about how his blind-trust plan would work. Johnson said that's another example of him ineffectively fighting back against Lisman. If Scott is to succeed in the general election, he will have to get into the details, Johnson said.

Sometime between now and October, he added, he will unveil the proposed legal structure that would wall him off from DuBois Construction's business decisions.

"We'll be able to work it out in a way that makes people comfortable," he said.

Scott said he also plans to more forcefully argue that the state bidding process is solid. Winning bids are open to public scrutiny, he noted. Minter, a former Agency of Transportation secretary, will not be in an easy position to dispute that.

Scott is likely to find Minter more willing to play by the rules of the road than Lisman was. The two served together in the legislature — she in the House and he in the Senate. Both worked on the transportation budget and the state's response to Tropical Storm Irene.

"I think it could be similar to the Welch-Rainville race," Scott said, referring to an uncommonly cordial 2006 congressional campaign between Democrat Peter Welch and Republican Martha Rainville.

Minter concurred: "That certainly is a great image. I think both Phil and I are similar in that way."

Both acknowledged, though, that a lot has changed in the 10 years since that race. Because of the U.S. Supreme Court's Citizens United ruling, super PACs may spend unlimited amounts of money supporting or opposing a candidate. Scott or Minter can reject or condemn the messages but are prohibited from coordinating with the outside organizations.

"We really have no idea what others will say or do," Minter said. "If there are attacks ... we're going to have to make decisions about responding."

Scott said he has no notion that the general election will be easier than the primary battle. "It just gets more difficult from here," he said.

But he'll be ready to stand up for himself, he insisted, just as he has for 25 years on the racetrack.

For his final race at Thunder Road last Thursday, he lined up in 14th place among 24 cars. Lap after lap, there was no hint of daylight between them as they looped the quarter-mile track at speeds of up to 80 miles per hour. In the final lap, two cars spun out of control, careened off the track and crashed.

"Usually, it breaks loose," Scott said afterward, frustrated that he never found his opening to pass in the traffic jam. He ended the race where he started, in 14th place.

But his patience also paid off. After successfully maneuvering a collision course, he's ready to race again this week.

Slideshow Photos: A Night at the Racetrack With Phil Scott 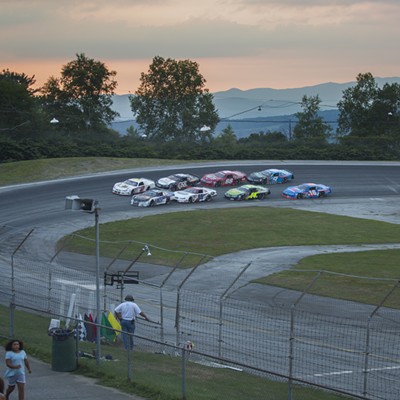 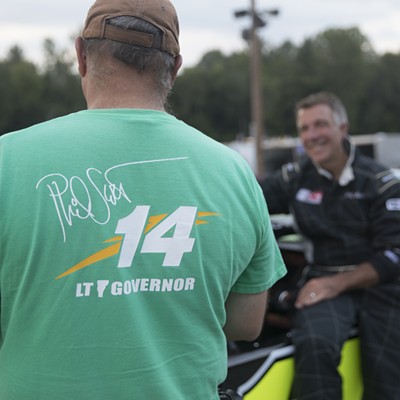 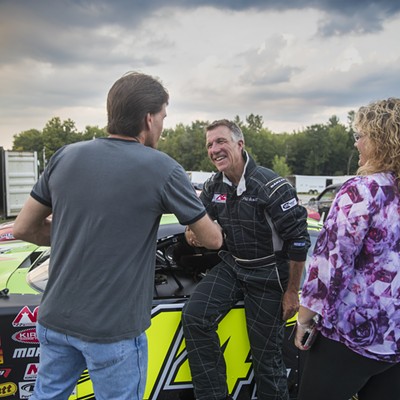 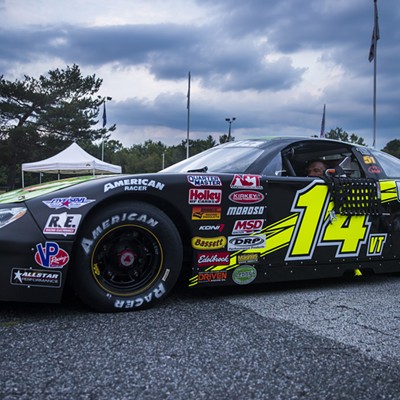 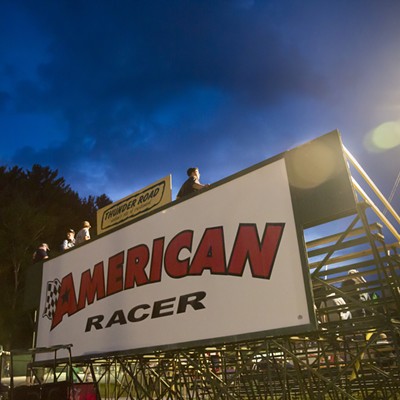 Photos: A Night at the Racetrack With Phil Scott
By James Buck
Click to View 23 slides

The original print version of this article was headlined "Phil Scott: Bruised and Battered or Road-Tested?"