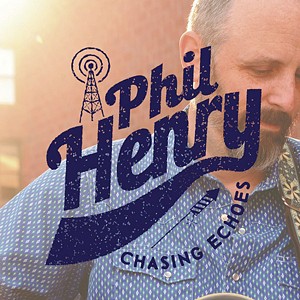 While looking over Rutland singer-songwriter Phil Henry's past catalog, I discovered he once recorded a snappy cover of They Might Be Giants' nerd anthem "Birdhouse in Your Soul." Henry reimagined the 1989 song with a featherlight ukulele and glockenspiel, almost like something you'd hear on a hip children's album meant to please kids as much as their hipster parents. I mean that as a compliment, in case it wasn't clear.

Henry is an artist of broad appeal. His immaculately constructed new album, Chasing Echoes, is full of rousing, country-tinged tunes, a few of which center on cultural or social messages. An exceptional cast of players joins Henry, including producer Colin McCaffrey and folk royal Krishna Guthrie, the latter of whom provides guitar and vocal support for a cover of his grandfather Woody's song "California Stars."

Despite being packed with heavy-hitting, preternaturally talented locals, the album isn't an especially memorable entry into the annals of Vermont's music history. But it's also not likely to cause any offense. It won't upset those with "good" taste, nor will only folks with "bad" taste like it — that would be an inaccurate oversimplification. More likely is that Chasing Echoes, with its generically poetic title, will strike a chord with people who perhaps haven't thought much about their own taste in music. Hence, broad appeal.

At 65 minutes long, the album is a bit bloated. The adage "less is more" certainly applies to record length. Of the collection's 16 tracks, surely at least one or two could have been shelved, such as listless rock tune "Talking Heads Tee Shirt" or the super-dry, super-serious "I Wish I Knew You Then." Also, do we really need "There Be Monsters Here," a song about refugees that doesn't do much to untangle the complexities of U.S. immigration? I mean, how could it?

The extraneous tracks detract from Henry's successes, such as the charming country-jazz ditty "Saturday Night at the Hot Sara." It's one of those peppy tunes all about stepping out and turning up, and Henry and his associates capture the feeling well. Fiddler Jimmy Kalb, who appears throughout the record, makes a particularly good impression here.

Though not the first song to draw a parallel between heartache and the destruction of a particular ancient Italian city, "Pompeii" ushers in Chasing Echoes with a grand, sweeping chorus worthy of the cataclysm to which it refers. While many will find the album satisfying, to these ears it just isn't as thrilling as its opener signals.

Chasing Echoes will be available on Sunday, October 18, at philhenryband.com. Henry celebrates its release the same day at the Jack McKernon Drive-In at Estabrook Park in Brandon.