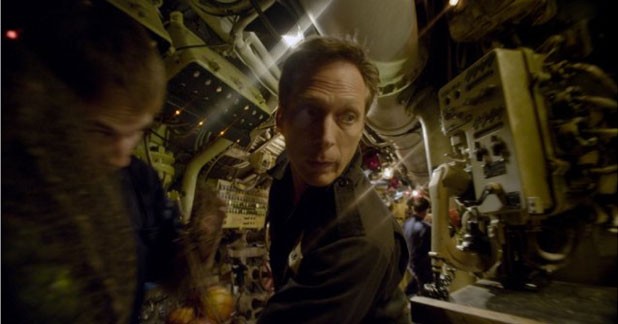 Early in 1968, the Soviet nuclear submarine K-129 suddenly went silent during a routine patrol. Not long after, the U.S. discovered its wreck in the Pacific Ocean. Given the possibility of sensitive intel on board, the CIA organized a complicated salvage operation, the results of which remain classified to this day.

It’s a real-life Cold War mystery that might have yielded a film at least as absorbing as Argo — a documentary, say, that explored all the conflicting theories about the sub’s demise, with plausible reenactments to bring them to life.

Writer-director Todd Robinson, despite his background in documentary filmmaking, has taken a different approach. In Phantom, which calls itself “inspired by” true events, he dramatizes a modified version of the theory presented by Kenneth Sewell in his 2005 book Red Star Rogue: The Untold Story of a Soviet Submarine’s Nuclear Strike Attempt on the U.S. — namely, that K-129 had a clandestine, potentially apocalyptic mission.

Setting his film almost entirely inside the submarine, with a solid cast of Americans pretending to be Russians, Robinson imagines how and why the crew might have flubbed that mission. Again, it’s an idea with potential. But Robinson flubs his own mission by creating a drama so creaky, hokey and poorly paced that it sinks long before the sub does.

Trouble signs are already apparent in the cliché-ridden first scene, where a weather-beaten Soviet Navy captain (Ed Harris) who has a Dark Secret and is on the Brink of Retirement receives One Last Assignment from his superior (Lance Henriksen). Not one line of their dialogue feels spontaneous (sample: “Greatness casts a long shadow”). The scripting remains stodgy as Harris boards the sub with his loyal executive officer (William Fichtner) and a mysterious fellow along for the ride (David Duchovny), whom they immediately peg as KGB.

The ancient diesel submarine is a wonderful setting — dirty, detailed and convincingly claustrophobic. It’s fun just to hear the lingo and watch the sailors go about their tasks, but not so fun when the captain’s Dark Secret starts giving him cheesy, strobing flashbacks. (They’re supposed to suggest PTSD and brain trauma but actually evoke “CSI.”) Harris is more than up to the challenge of playing a damaged-yet-competent man of honor. But when the captain finally unveils his past in a long monologue, he chooses such a ludicrous moment for introspection — right after the villain reveals his master-plan and skedaddles away to implement it — that the viewer can only gape at the director’s misjudgment.

Putting the brakes on the action for a soliloquy may work in Shakespeare, and on “Deadwood,” but Robinson doesn’t have the brilliant text to justify that sort of theatrical pacing. All the characters have the most predictable conflicts imaginable, and when Duchovny’s KGB man reveals his own personal secret, it elicits not an “aha!” but a groan.

Of course, it doesn’t help that the actor mainly brings Phantom his patented California deadpan and his known association with a TV show that featured bizarre disappearances. While Harris, Fichtner and Johnathon Schaech (as the sub’s political officer) do a reasonable job of impersonating Soviets without the distraction of fake accents, Duchovny barely attempts to sell his character’s motivations. That’s unfortunate, since he’s the sole representative of a rogue, über-paranoid KGB faction whose psychotic plotting drives the film’s action.

Phantom is a valiant attempt to show the Cold War from the other side, and submarine and navy buffs may have reason to enjoy it. For the rest of us, though, it’s like watching fine actors do dinner theater in a tin-can diner, with the watery ending always too far away.