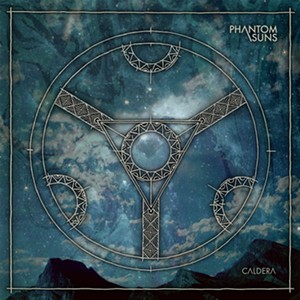 Are the '90s back? In Burlington, at least, it seems the halcyon days of big, distorted guitars, angsty lyrics and pounding drums have indeed returned. Between the pop-punk love letter that was Preece's Bad Choices Make Good Stories and the new Phantom Suns record, Caldera, you'd forgive a guy for thinking Bill Clinton is still getting oral in the White House and rock stars are still writing about heroin. Or, you know, that there are such things as rock stars...

Whether you view the '90s revival as a legitimate return to beloved forms or just a blip of influences resurfacing, there is no dismissing Caldera as anything other than authentic and well wrought. Phantom Suns' first full-length effort follows 2014's excellent Parhelia EP and expands on the band's promise. It also showcases how far bassist and producer Ryan Cohen and his Robot Dog Studio have come.

Cohen pulls multiple shifts in playing, recording, mixing and mastering an album with a wonderful trait achieved only by putting in the elbow grease: tonal fidelity. The record holds together as one solid piece of work, from the ferocious stomp of opener "Forget" to the atmospheric power of closing cut "Olympus Mons." The art of making an LP that feels like a cohesive artistic statement should not be overlooked in 2018.

Seth Gundersen, of beloved local rockers Villanelles, handles vocals with a suitable bite — though occasionally his snarling melodies and ambivalent lyrics stick to the grunge playbook a little too closely. "I tried to smother you / And I tried chemicals / You foiled all of my attempts / You just keep sprouting up / You return even though I dug you up right by the roots," Gundersen sings on "Knotweed," a nice hit of stoner rock.

Chris Mathieu's drum work is propulsive, and Cohen mixes it just right. As much as there is to love about '90s rock, the reverb on the drums on a lot of those classic albums — most egregiously Pearl Jam's Ten — does not age well. Both Mathieu's kit and Gundersen's guitars are right where they should be in the mix. The trio sounds properly giant, capable of muscular dynamics and sonic bombast.

"Trial by Stone" is a clear standout, a mammoth blast of rock and roll that just so happens to be about The Dark Crystal, the gorgeously twisted 1982 Jim Henson epic that gave so many kids nightmares. Who would have guessed such a subject would fit so-called "alternative" music so well? As Gundersen howls about dying worlds and dying races, what could have been an eggheaded idea is pulled off expertly. You start hoping the band adapts the cult classic Legend for its next LP.

Caldera showcases a band embracing its sound with laser-like focus. With a foot on the distortion pedal and a head in the stars, Phantom Suns know the aesthetic they want and achieve it with aplomb.

Caldera is available at phantomsuns.bandcamp.com. Phantom Suns play this Thursday, December 6, at the Monkey House in Winooski.