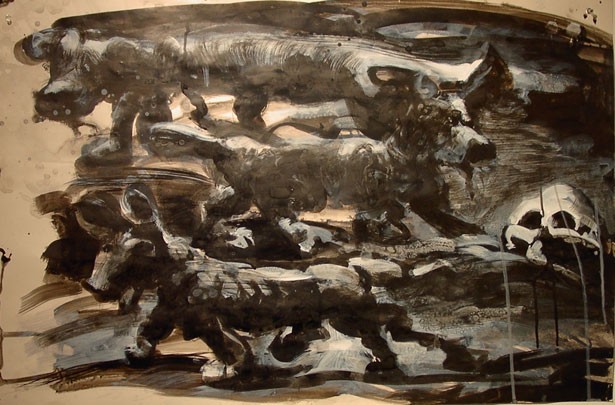 The tag "man's best friend" for Canis lupus familiaris isn't too far off the mark, considering we've been sharing our living quarters with domesticated dogs for at least 15,000 years. But not all canines are warm and cuddly. Some are downright nasty. Lance Richbourg, a professor emeritus from St. Michael's College, has a few friendly pooches among his paintings in "Dawgs" at the Gallery at Burlington College, but most are snarling, and a few are downright menacing.

Although Richbourg's dog series is a few years old, this selection of paintings and drawings hasn't been shown before. It's a raw exhibit - all of the untitled works on paper are push-pinned to the walls, and colors are applied in smears, slashes, spatters and nearly chaotic brushstrokes.

A pair of 11-by-14-inch pencil drawings torn from a sketchbook is attached to a 52-by-60-inch painting. The informal sketches are hung one above the other like a vertical diptych. They provide a hint of context for the larger painting, which is one of most dramatic in the series. On top is a close-up view of the face of a muzzled mastiff straining to attack. The lower sketch shows the whole animal, charging head on, with an equally rapacious mongrel running alongside it. The drawings contain very little white space, or extraneous information. They appear to simply burst out of the paper.

The accompanying painting of the same animals presents them nearly life-sized and unmuzzled, bearing down on the viewer. Richbourg's mixed-media technique includes a wide array of materials but few colors; this piece is only black, white and gray. The hellhounds - white at left, black at right - rush out of a tangled, pale-gray background.

An even more ominous scene unfolds in another 55-by-49-inch black-and-white painting. It shows a dark, wolf-like dog advancing toward a swaddled white infant in the foreground. The fate of the baby is yet to be determined. To add to the drama, dense layers of black, sepia and white-on-white in the picture plane give the impression the dog forms are emerging from a layered, tenebrous void.

Another black-and-white piece, a 22-by-38-inch painting, includes a human skull at lower right. This one is even weirder, as the dogs look like odd little terriers trotting around like machines in different directions. The way Richbourg uses paint gives the feral bodies dimension. Wildly varied visual textures cover every inch of the piece.

Every dog has its day in Richbourg's series, and that includes dogs in vibrant color. Two 48-inch-square pieces use the same palette: blues and reds in the backgrounds, raw sienna, grays and even a few greens on the ground. The image with a prominent, mottled Great Dane is the most chaotic; the churning background is a storm of crazed, broad brushstrokes.

The other piece with similar coloring is a little calmer, and more naturalistic. Its background includes discernible trees and a ruddy red sky, but, again, Richbourg taps into the sinister side of a few of the dogs. Eyes are beady, and one of the large hounds seems to be considering taking a bite out of a smaller animal in the foreground.

Around 1848, the Japanese master Hokusai produced a humorous print of an artist working with five brushes at once, holding them in his hands, feet and mouth. Richbourg's "Dawgs" are all so active that it's not difficult to imagine him using a five-brush technique himself. And while the pieces here seem spontaneous, there isn't a "dog" among them.