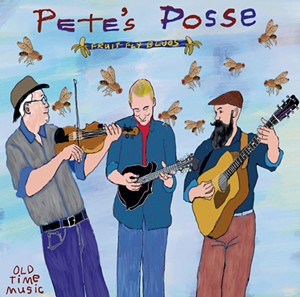 Pete's Posse have engaged their fan base quite well this year. On New Year's Day, the folksy trio of Pete Sutherland, Tristan Henderson and Oliver Scanlon pledged to record a live performance every week and upload it to Facebook — and they've kept it up all year.

No two videos have been quite the same. The group has traveled to interesting locations, toyed with visual aesthetics and brought in special guest musicians. The campaign is exactly the right kind of project a regional band should be doing to elevate its profile — even if that band already enjoyed a publicity boost from appearing on a February episode of ABC's "The Bachelor Winter Games."

Aside from the weekly video updates, the greatest treat Pete's Posse offered their followers this year is Fruit Fly Blues, a follow-up to 2017's The Conversation. While the latter was a considerably progressive take on folk and Americana, the new LP takes a deep dive into old-time, the roots of bluegrass and all things Pete's Posse.

As Henderson, the band's guitarist/jaw-harpist, put it in an email to Seven Days, "One way to think of the difference [between bluegrass and old-time] is, bluegrass is old-time that got 'spiffed up' and went to college." He goes on to mention that the band prefers that kind of "old-time earthiness."

Comparing their two most recent releases, a contrast emerges, not only in the style of tunes the group plays but also in presentation. Production-wise, The Conversation has more spit shine, while Fruit Fly Blues arrived at the party still a little bit dirty. One constant is that Pete's Posse offer a variety of original and traditional songs.

The album's title track opens with a flurry of Scanlon's dizzily picked mandolin. Sutherland underscores with trenchantly struck fiddle. As the song opens up, the Posse volleys lead back and forth over Henderson's bobbling double bass.

"Salt River" is a thatched, fiddles-only traditional. Sutherland and Scanlon weave their way in and out of harmonious unions and complementary divergences.

"Goin' to Town" is a breakneck lark. The wildly plucked and bowed tune rips by with wild abandon. You can picture a group of backwoods mountain-dwellers, gussied up for a dance in the town square, kicking up their heels to this airy gem.

"Greenfields of America / Dickey's Discovery," melding a pair of old songs, showcases some of Scanlon's and Henderson's most skillful fingerpicking. The masterfully plucked intro is flourished and ornate and seamlessly transitions into an up-tempo heel-stomper.

Pete's Posse remain one of the most talented and hardworking folk acts in Vermont. They are masters of old and new, and their confidence and cohesion continue to grow.