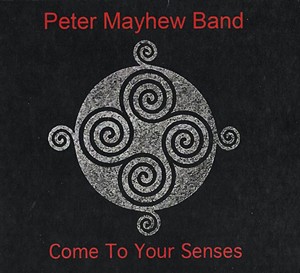 Peter Mayhew Band's debut record, Come to Your Senses, won a noteworthy award in 2017. The Barre-Montpelier Times Argus named it Best Rock 'n' Roll Album in its annual Tammie Awards, which single out the most outstanding local recordings of the year. The win was impressive considering the bandleader's relatively unknown status in a state with rockers coming out of its ears.

After years of performing in fringe settings, the 53-year-old central Vermonter finally got around to making a record and smartly sought the engineering expertise of Future Fields' Eric Maier. The band's simple rock setup of drums, bass, and rhythm and lead guitars is locked in and spread across the mix, especially Mayhew's reverb-soaked, raspy vocals.

Speaking of vocals, the dude sounds remarkably similar to another famous Peter with a striking voice. No, not Peter Mayhew the actor, whose iconic growl we all know and love from his portrayal of Wookie star pilot Chewbacca in the Star Wars saga. The Mayhew in question could convincingly front a Peter Gabriel tribute band.

The laid-back rock tunes on Come to Your Senses don't bear much of a resemblance to the "Sledgehammer" singer's work, however. Rather than grandiose progressive-rock anthems, Mayhew offers a chill, mildly reggae-infused sound. If you find yourself cringing at that description, keep an open mind, because the record is solidly enjoyable. It's a little bit like the Police — but with way less punk rock, more rocksteady and an overall crunchy vibe.

Mayhew writes largely in minor keys, which add edge and cast dark shadows on his often cliché lyrics. Whenever he does burst into a major key, as on the chorus of "A Voice," it has more power and resonance than it would with no key change, or if the song lived fully in the sunshine.

"Rise Up" begins with a series of slow-motion guitar chords over roiling cymbals before snapping into an even-keeled groove. Tom Glasel's slippery lead guitar warbles between Mayhew's rallying cries: "Hold up / The skies are falling down / Climb out of the belly of the beast." We all know the world is a sick place, but the singer leaves the remedy open to interpretation.

"Healin' of the Nations" continues the record's running theme of changing our lives through positivity and connectivity, and goes about as close to straight-up reggae as I can stand. At least Mayhew refrains from imitating a Jamaican patois. Hi-hats drive the loosey-goosey beat, with an occasional tom fill or cymbal crash added for punctuation.

"Tis a Gift" similarly stands out from the album's overcast malaise with its undeniably garage-rock roots. It reaches a gnarly climax with a four-on-the-floor stomp and prickly punk-rock chords.

Decades in the making, Come to Your Senses is a well-produced and effective introduction to Mayhew's music. If you can look past its cheesy themes, you'll find a cohesive and entertaining debut.

Come to Your Senses is available on Spotify.

Speaking of Peter Mayhew Band, Come To Your Senses