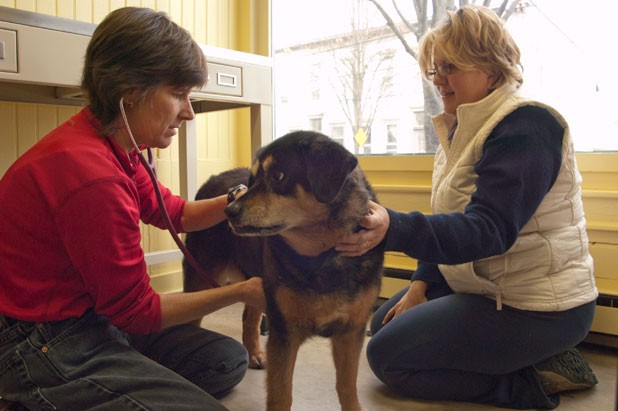 Susan McMillan looks at the crisscrossed scars on her forearms. She still remembers her attacker’s name. “That was Cuddles,” she says.

McMillan and her domestic partner and practice manager, Becky Roberts, run a Burlington veterinary clinic that they’ve made sure is accessible to low-income pet owners. By keeping costs low, outsourcing complex care and emphasizing disease prevention, the Old North End Veterinary Clinic has thrived despite a recession and a nationwide trend of fewer vet visits. It celebrated its fifth anniversary on November 17.

McMillan and Roberts work in a storefront space on North Champlain Street that they refurbished in a DIY community effort in 2006. The walls are brightened with Local Color paint; the waiting-room chairs were freebies from Fletcher Allen Health Care. (“The Doctor will see you soon. Sit. Stay,” reads a poster.) In the exam room, whose table was donated by the University of Vermont, McMillan provides basic medical care, medications, vaccines, palliative care and consultations. Every appointment lasts a reasonable half hour. While Roberts runs the business end of the practice from her tiny but shipshape office, the doctor emphasizes nutrition, vaccines and, for ailing pets, a range of options — not just the state of the art.

An observer sees that principle in practice on a recent day when Tuffy, a black pug, visits along with his littermate, Keegan, who is being examined for warts. For the warts, McMillan advises watchful waiting. Tuffy presents a trickier issue: He’s overweight, even though his owner, Community College of Vermont social-work student Kylee Rowden, keeps him on just one meal a day. In dogs, weight gain can indicate a thyroid problem, and some vets might argue that the responsible next step is to check Tuffy’s thyroid. But his youth makes him less likely to have thyroid disease, and further conversation reveals that Rowden’s mother has been slipping the dog canned-food snacks.

McMillan decides to skip a blood test in favor of a simpler option. “Cut out the canned food and cut the kibble back,” she suggests. “We want to see a nice tuck at the waist.”

McMillan also takes a few minutes to explain that, although Rowden can get her dogs vaccinated against Lyme disease, the first line of defense in short-haired dogs is simply pulling ticks off within 48 hours of attachment. “Oh, yeah. We check them every time they come in [from outdoors],” agrees Rowden.

Even preventive vaccines have alternatives, in other words. This kind of decision making, with its emphasis on less expensive and less invasive choices, is a hallmark of low-resource medicine.

Full disclosure: McMillan takes care of this reporter’s tortie cat, Junie Moon. More to the point, my experience as an MD tells me American medicine has a lot to learn from effective low-resource practice. When I taught at a clinic in a poverty-stricken area of Indonesia, we tried to protect both the patients’ lives and their livelihoods. If the treatment a physician wanted to recommend was so expensive that the family would go hungry paying for it, we looked for ways to cut costs. Could we try a medication in place of surgery? Could the patient’s family take over some nursing care? Some diseases resolve spontaneously; would it be better to do nothing? When treatments are pricey and only temporarily effective, is it time to talk about palliative care?

Practitioners trained in Western medicine often hesitate to suggest such options, worried that it is unethical not to “do everything.” But alternatives to doing everything can be effective, humane and holistic. Doctors can build more trusting and effective relationships with their patients by discussing the patient’s (or, in a pet’s case, the owner’s) specific circumstances. In short, low-resource medicine teaches us that sometimes less is more.

McMillan and Roberts get this. “Her real talent,” says Roberts of her partner, “is answering the questions and really being open to taking the time ... She’s really good [at] helping them to understand what’s going on, what their options are. And their options aren’t always really expensive.”

There’s a lot at stake in veterinary medicine, where virtually all the costs are out of pocket. In a poll conducted by AP/Petside.com, 41 percent of pet owners with incomes of less than $50,000 said they couldn’t afford to take their pets to the vet, while 43 percent of owners thought vets recommended excessive treatments. According to the Bayer Veterinary Care Usage Study, 53 percent of pet owners find costs at the vet to be much higher than they expected.

For these and other reasons, unlike practitioners of human medicine, veterinarians have seen a significant drop-off in client visits in recent years. The profession’s journals are full of headlines such as “5 ways to make your veterinary practice’s door swing” and “Re-establish your veterinarian role as teacher to boost visits and revenue.”

McMillan and Roberts have taken a different approach — and bucked the nationwide trend. Their clinic is so busy they must periodically turn away new patients.

McMillan recalls an obese dog that another vet had placed on glucosamine and painkillers for painful joints. She worked with the owner to help the dog eat less and lose weight. Soon, McMillan says, he was a “new dog” and off all the pricey meds.

Char and Richard Drought of Colchester have an elderly yellow cat, Mr. Ca-Pasa (pronounced like the Spanish greeting). After bad experiences at other clinics, they say they’ve “stuck like glue” to the ONEVC. “I wouldn’t go anywhere else ever, ever again,” Char Drought declares. “[McMillan] is very, very kind and compassionate.”

Peggy Luhrs, who has brought her gray cat, Lily, in a carrier strapped to a luggage cart, says she likes visiting a clinic right here in her neighborhood; her cat prefers the short roll down the street to a trip in the car (“feline resistance,” the Bayer study found, prevents many clinic visits, too). But she also likes the clinic’s approach. “One of the places I went to I felt really pushed the medicines, the drugs, like most medicine pushes drugs these days,” she says. “They will suggest it here, but I don’t feel like they push it as hard ... [Lily] gets what she needs.”

“People thank us almost every day just for being there,” said McMillan. “That just does not happen in a regular clinic.”

McMillan began her veterinary career in Fairbanks, Alaska, where she cared for sled dogs and pets that arrived by bush plane. Then she met Roberts, moved to Roberts’ home turf in southern California, and took a job with a vet clinic there. She grew frustrated when her bosses urged her to recommend more prescription diets, tests and medications across the board, and to bring up her “average transaction fee.”

The couple eventually drove from California to Maine, interviewing at clinics and looking for a place to settle. When they got to Burlington, McMillan says, “we both just thought, Oh, my God, this is the place.”

In 2005, Roberts and McMillan started Vet to Pet Mobile Veterinary Service, making house calls on wheels and doing administrative work from their kitchen table. In 2006, they added their brick-and-mortar clinic, which they lease at low rates from the Champlain Housing Trust.

Some pets, of course, require more than the basics. A critical component of ONEVC’s success is its agreements with local animal hospitals. If their owners are willing and able to pay, pets needing X-rays and blood tests are sent to those partner clinics. McMillan has also contracted to use their facilities to perform operations.

“[McMillan and Roberts] have a very low-overhead business altogether, whereas my business is much more of a full-service business,” explains Elizabeth Alton. She’s a veterinarian at Green Mountain Animal Hospital, one of ONEVC’s partner clinics; it has an X-ray machine, pharmacy, in-house lab, boarding facilities and the capacities to perform anesthesia and surgery. All of that means higher prices. “The cost of other things is going to be increased in order to pay for the full-service possibility,” Alton says.

Historically, Alton explains, people-doctors have been able to run less expensive offices because they had access to the equipment and facilities of hospitals, whose high costs were often tax subsidized. Vets haven’t had that luxury. They are fewer in number than doctors and often work in rural regions, so they’ve had to be self-sufficient. “You got out of school, and you opened a practice,” Alton says. “And you had to fill your practice with all of the things that you needed to do your practice.”

In some more populated areas, Alton adds, veterinary medicine is beginning to follow the human-medicine model of a central hospital with satellite clinics like ONEVC sharing its resources. Low-cost clinics “certainly help,” she says.

“I think technology sometimes gets us away from the preventative medicine,” Alton continues. “If you can get in on the preventative floor, you’re going to prevent a lot of those things that you need all that other equipment for.”

McMillan acknowledges that veterinary medicine can do almost everything human medicine can do. But those advances “just [put] pet ownership out of the reach of people,” she says. “When it gets to where the standard of care requires $200 to diagnose a simple urinary tract infection, it’s just not going to work.”

ONEVC’s exam room has a picture window facing the street. Because she’s right-handed, McMillan explains, rolling her eyes, she has to examine pets with their rears facing the window. Sometimes she has an audience; there’s plenty of foot traffic. A man with a Korean War veteran baseball cap makes his way down the sidewalk. Nepali kids run or whiz by on bikes. African immigrants walk past; the clinic is kitty-corner from the Association of Africans Living in Vermont.

The setup reminds McMillan of a clinic she and Roberts visited in Maine, where the vet’s window adjoined a playground, and kids often gathered to watch surgeries. That vet, too, made house calls. “He would go around to the working-class neighborhoods with his bike,” recalls Roberts, “and he would go [in his boat] to the islands to people who couldn’t get to him.”

Being accessible to her clients — physically and financially — suits McMillan. “There’s got to be room for quality medicine where the owner knows that there are other options available, but let’s try this [less expensive option],” she says. “It’s for the pets and the people.

“I’m not one of the people that would rather be with animals than people,” she adds. “I really like people, too.”