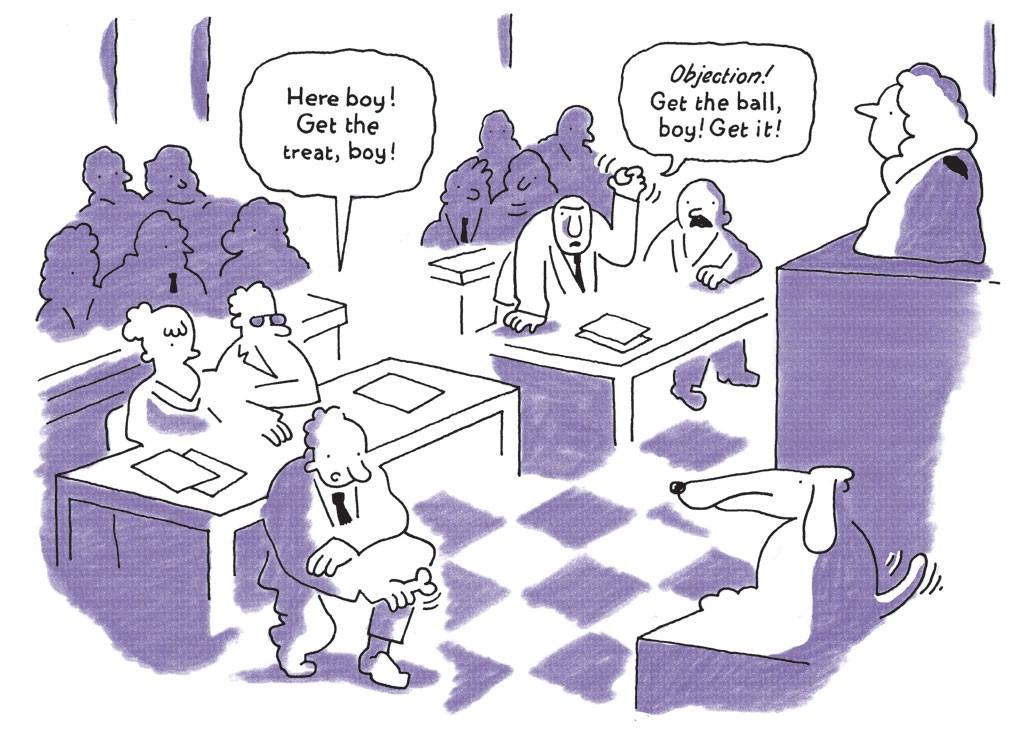 Should pets be considered property — like a house — or a co-creation to be shared like minor children? The case of an 11-year-old German wirehaired pointer has been challenging Vermont's courts — including its highest — to decide whether "ownership" or "custody" laws apply to divorcing partners fighting over a mutually beloved animal.

Court records indicate that Daniel Hament and his ex-wife, Laura Baker, had no minor children and were able to work out the disposition of their other property and financial affairs when their divorce landed in family court last year. The only disagreement was who would get Belle, the couple's dog. Baker favored a split-custody agreement, an arrangement that was not acceptable to Hament.

Chittenden Superior Court Judge Linda Levitt told the pair that the primary factor she'd use in deciding Belle's fate would be which spouse had been "more active" in caring for the dog during the marriage. Hament, a veterinarian at Richmond Animal Hospital, was used to taking Belle to work every day at the animal clinic. For her part, Baker routinely took the dog for long walks in the woods and was very involved in Belle's daily care. Levitt informed them that family court would not enforce a shared visitation schedule, "even if the parties agreed to it."

Ultimately, Levitt awarded the dog to the husband. While she found that either person could provide Belle with a happy and healthy life, she gave a slight edge to Hament because the dog had grown accustomed to the routine of going to work with him every day. Notably, Levitt also determined that the husband "treats the dog like a dog," whereas the wife is more doting and treats the dog "like a child." The court concluded that the dog would do better with the husband's "balanced attitude toward the animal."

Baker appealed the decision to the Vermont Supreme Court. She contended that the court had erred in refusing to consider a permanent joint ownership arrangement, similar to the one the couple had agreed to temporarily during the divorce proceedings.

Baker also argued that the basis for awarding the dog to her ex-husband was arbitrary and inconsistent with previous high-court rulings, which had recognized that family pets are property but a "special property" and thus should be treated differently in divorce proceedings than, say, inanimate objects.

In its April ruling, the Vermont Supreme Court disagreed. It upheld the lower court's decision and also ruled that the state's family courts shouldn't wade into the thorny business of enforcing visitation schedules and shared custody arrangements for pets.

"Unlike child custody matters," the high court wrote, "there is no legislative authority for the court to play a continuing role in the supervision of the parties with respect to the care and sharing of a companion animal."

Baker's attorney, Nanci Smith of Williston, says she was disappointed that the justices weren't willing to issue a "bright-line rule" clarifying the special property status of pets. If animals are property but special property, she argues, they ought to be treated specially in the eyes of the law. In short, if the courts are willing to enforce other post-judgment orders on marital property, such as the sale of a house, then they should also consider enforcing joint ownership and care of family pets.

"Just because you're getting divorced, it doesn't seem the same as giving the piano to somebody," Smith says. "It's severing an emotional connection that we all value as a society and the Supreme Court has valued in other contexts."

Hament's attorney, Matt Buckley, agrees that the Supreme Court didn't really establish any new case law with this decision. But while other courts around the country have moved in the direction of allowing or even ordering shared ownership arrangements of animals, he says, evidently the Vermont Supreme Court "didn't want to go there."

While the family pet may be a special form of property, he says, it's still property nonetheless that must be allocated to one party.

"Everybody in the courtroom that day were dog lovers," Buckley points out. "I bring a dog to my office every day. Judge Levitt has a dog. Nanci Smith brings her dog to the office. So everyone in there appreciated the emotional significance of what was being decided."

There's some precedent here. In 2009's Scheele and Scheele v. Dustin, plaintiffs Sarah and Denis Scheele sought to recover more than $3,000 in damages for the severe emotional distress, pain and suffering, and loss of companionship they suffered when Lewis Dustin deliberately shot and killed their dog, Shadow. Though the couple's unleashed dog had clearly wandered on Dustin's property, it had displayed no aggressive or threatening behavior that would have justified Dustin's actions.

In its 2009 ruling, the Supreme Court acknowledged that an animal's worth is not primarily financial but its value "derives from the animal's relationship with its human companions ... Indeed, we have suggested that the emotionless economic calculus of property law may not fully compensate a mourning pet owner."

That said, the high court wasn't willing to go so far as to grant financial damages to the plaintiffs similar to those awarded to, say, parents who lose a child and then file a wrongful death claim for loss of companionship. Ultimately, the Scheeles won $155 for the financial loss of their pet but nothing extra for the emotional pain and trauma of seeing him shot and killed.

Thus far, no state has recognized family pets and companion animals as anything more than just property, albeit special property. But that could change over time, suggests Linda Ackerman, a California-based attorney and mediator whose firm, Pet Custody Solutions, specializes in animal custody disputes.

As Ackerman points out, various animal rights activists around the country have advocated for stronger legal rights for companion animals that, in some cases, take into consideration as best as can be determined what the animal itself would want. For example, she points to the case of a Florida man who brought a habeas corpus pleading in New York for primates that were being kept in inhumane conditions.

Ackerman likens the issue to gay marriage, which was long and hard-fought over decades. As she puts it, "The law will find a way to justify what has achieved some kind of critical mass in public opinion."

If her niche legal practice is any indicator, Ackerman may be on to something. She says animal custody disputes have a lot in common with child custody cases, especially when the couple has no children. Shared pet custody arrangements work well for some couples, she adds, especially when it comes to addressing end-of-life issues, such as shared vet bills and deciding on the right time to euthanize an ailing pet.

It's worth noting that virtually all the animal custody disputes Ackerman has either handled or heard about have involved dogs. As she put it, only half-jokingly, "Cats decide for themselves where they go."

The original print version of this article was headlined "Do Divorcing Vermont Couples Get 'Ownership' or 'Custody' of the Family Pet?"