In his Andover kitchen on a recent Saturday, JuanMa Calderón offered a taste of sauce to fellow chef and friend Nevin Taylor. "Maybe a little more spiciness?" Taylor suggested. "But the smoke is nice."

Calderón had started with a base of salsa madre, the mother sauce with a blend of flavors that evokes his native Peru, he said. He uses ginger along with other standard ingredients, including garlic, lime juice and ají amarillo, one of three chiles central to Peruvian cooking. To this version, the chef had also added some smoked chiles and passion fruit juice.

The sauce would dress chilled, lightly poached shrimp to be served later that day alongside freshly shucked oysters, blue cod ceviche and frothy pisco sours. That spread would kick off dinner for 20 paying guests after they drove up a dirt road to the unexpected location of a new restaurant called Esmeralda.

Calderón, 54, and his partner, Maria Rondeau, 50, created the southern Vermont destination. They also co-own Celeste in Somerville, Mass., which Esquire magazine named one of the nation's top new restaurants in 2018. Twice a month since late June, the couple has welcomed upwards of 24 diners at each of three communal weekend meals hosted at the 19th-century white clapboard home in Andover they bought two years ago.

Their rural venture inspired a glowing July 2 write-up in the New York Times, which described a trial run of one such dinner: a monthly Saturday pachamanca. The word means "earth pot" in Quechua, an Indigenous language of the Peruvian Andes. It also refers to a traditional pre-Incan meal of marinated meats, potatoes, vegetables and sweet, spiced cornmeal humitas cooked in a hole in the ground with the heat of hot stones.

At Esmeralda, the earth oven is dug into a Vermont hillside with a stunning view of Mount Ascutney. Many ingredients are sourced locally, including alpaca, a favored meat in Peru. "We have not found local farms that raise guinea pig," Rondeau noted, referencing another common Peruvian ingredient.

"We're doing a clambake in the house of pachamanca." Nevin Taylor tweet this

Meals on Friday nights, Sundays and some Saturdays do not involve the earth oven. All include beverage pairings and range from $90 for lunch to $185 for the pachamanca. Each has sold out within 30 minutes of ticket release, drawing a mix of locals, second-home owners and visitors from out of state, Rondeau said.

The couple had always intended that their Vermont home be both a country getaway and a dining venue. They've filled it with art from Peru, Chile and Rondeau's native Guatemala. A new commercial kitchen boasts a large picture window looking over the deck, where guests gather around one long table. From there, they might spy Calderón finishing a menu of new potatoes with yellow chile sauce and cilantro rice with seared local quail.

Esmeralda's menu also ranges beyond Peruvian to include occasional chef collaborations. For the Saturday meal of the August 6 through 8 weekend, guest chef Taylor was preparing a different feast traditionally cooked in a hole in the ground.

"We're doing a clambake in the house of pachamanca," Taylor said with a grin, referring to the beachside cooking method Native Americans developed centuries ago. "I'm trying to mirror what they're doing here. If there is something I can do culturally, it would be this."

Taylor, 34, is the chef at the Crooked Ram in Manchester. A multigenerational Cape Cod native, he now lives on a farm in Chester, just 10 minutes from Esmeralda. He met Calderón and Rondeau in Boston, where he cooked for more than a decade in A-list restaurants including Toro and Asta. The couple helped Taylor and his partner, Beth Herbert, land nearby in the fall of 2019 after they decided to move back to Herbert's home state to start a family.

"Our idea is to grow community here," Rondeau said. "He is part of that."

When the trio met in 2018, Taylor was helping some other friends with a new restaurant. Calderón and Rondeau, aspiring restaurateurs at the time, started chatting with him while he cooked. Inspired by a string of successful pop-up dinners in their Cambridge, Mass., home, the couple was seriously considering opening a restaurant.

Taylor remembered being simultaneously amused by their naïveté and impressed by their fresh perspective. "I knew I wanted to be friends with them. I wanted to help however I could," he said. "I thought, This is going to be an interesting ride. Even if it goes down in flames, it'll still be really interesting."

Calderón and Rondeau soon created Celeste, an intimate, 620-square-foot Peruvian restaurant that extended the warm, buzzy vibe of their dinner parties. It did immediately catch fire — in the best way possible — landing a coveted spot on the James Beard Foundation's semifinalist roster for best new restaurant of 2018.

Taylor came on opening night and later helped when Celeste was invited to host its first large off-site event, for 300 people. It was natural, Rondeau said, to ask their good friend to be one of the first guest chefs at Esmeralda.

He, in turn, had invited another guest chef: his father, Scott Taylor, a lifelong professional cook from Sandwich, Mass. The younger Taylor started in his dad's kitchen as a busboy at 14 before attending culinary school; he earned a prized internship at Boston's now-shuttered pillar of French cuisine, L'Espalier.

Taylor hadn't cooked a lot with his father, he said: "Dad was always working, running restaurants."

On August 7 at about 1 p.m., the small crew sat down to share a pre-event "family meal." Calderón had prepared a cod and vegetable stir-fry with soy sauce and plentiful fresh ginger cut into long matchsticks. "I cooked my whole life," he said as he stirred bok choy and peppers. "I basically learned everything from my mom."

Soy sauce is central to Peruvian cooking due to the country's long connection to both China and Japan, the chef explained. "I'm the great-great-grandson of a Chinese slave. They came to Peru in the 1800s to build the railroads and to work in the sugarcane fields," Calderón said. "This is what my grandpa used to cook."

After lunch, everyone except Rondeau and Nevin Taylor headed off to continue prepping.

Designing his three guest chef meals at Esmeralda offered a chance to think differently about his cooking style, Taylor explained. He had considered how Calderón shares and connects with his culture through cooking. "In Peru, food is so important," Rondeau noted. "It's really in their DNA. You're eating, breathing, talking food."

Taylor had also sifted through memories of eating and cooking in his own family. "Any young cook who came up at the time I came up, you have to have your own vision, and it has little to do with your own culture. This weekend is about reconnecting with that. Do I have a story to tell? Do I have something interesting to share, to put on the table?"

In the kitchen, his dad was busy filling large clam shells with the quahog mixture — freshly chopped clams and their juices, linguiça sausage, onions, bell peppers, bread, paprika, parsley and celery. Calderón was buzzing together a chile sauce flavored with huacatay, Peruvian black mint, to duke it out with the clambake's traditional drawn butter. Enrique Rivera, a bartender and server from Celeste, was testing a sunset-colored drink made with brewed purple corn and passion fruit and mango juices. 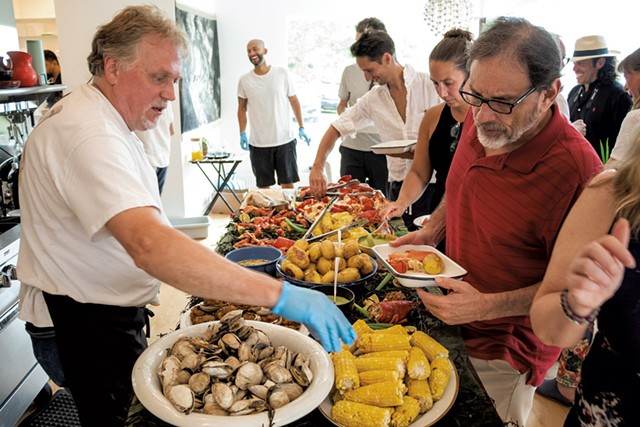 Guests began to arrive and descend the stone stairway to the bar and seafood stations on the lower lawn. As they chatted, they slurped briny oysters from the shells, nibbled on chile-flecked marinated shrimp and blue cod ceviche, and sipped cocktails.

"Most clambakes don't have ceviche," observed Stan Mescon, one of four who had traveled together from Newton and Needham, Mass., lured by the New York Times article.

At about 4 p.m., the fire heating the stones in the cooking pit had largely burned down. The Taylors worked to load the pit with the help of a few people, including 18-year-old guest Miles Hilger, whose family had decamped from New York City to Reading for the pandemic.

"A real clam pit is just a hole in the ground, no stones," Scott Taylor commented as his son carefully pulled away large chunks of wood, leaving burning embers and hot stones at the bottom of the pit. A tangle of wet seaweed went in first, popping as it met the heat, followed by corn, lobsters, clams and more seaweed. Mylar blankets were laid over the top, and stones placed around the edge weighted everything down.

Members of the crew handed out cups of rich, velvety clam chowder to rave reviews. Nevin Taylor and Herbert's 18-month-old spooned it into his mouth with gusto.

Barely an hour later, Scott Taylor was proven correct, and guests loaded plates with perfectly cooked seafood, potatoes and corn, along with stuffed quahogs and salads. Nevin Taylor plied everyone with more lobster and urged them to try the two Peruvian sauces. 'They'll probably be good with everything," he said.

Cheesecake and shots of pisco topped off the meal.

At one end of the long table, two thirtysomething couples exchanged cell numbers. Mark Phillips, a composer and sound designer, left Brooklyn for Vermont last summer with his partner; they decided to settle in East Dorset. "With all this stuff popping up, we don't need to go back to New York," he said. "We've got our own shit."

Anna Henson, a lawyer who grew up in an off-the-grid house in Landgrove, said she never expected to move from New York City back to Vermont, but the pandemic changed her mind. Her husband, Donald Johnson Montenegro, an art dealer originally from Quito, Ecuador, certainly never expected to find a restaurant serving Peruvian food near his wife's rural childhood home.

"Restaurants are definitely one of the things we miss from New York," Henson said, "but the food scene is just getting better and better here."

The original print version of this article was headlined "Digging Dinner"