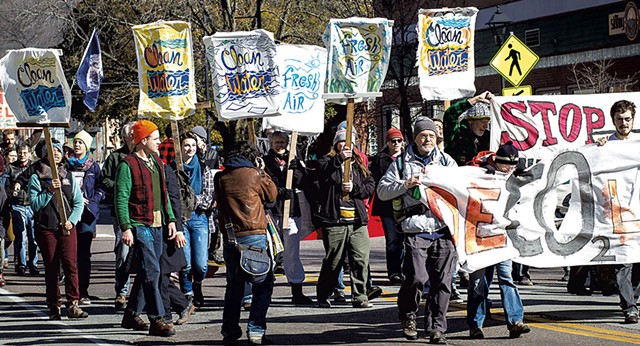 Fred Wolfe is a bearded, full-bellied 85-year-old great-grandfather who, until a few years ago, acted the part of Santa at the annual Strafford Post Office holiday party.

On September 21, he embraced a new role: Wolfe and five other senior citizens chained themselves to the gate at a Vermont Gas construction site in Williston — and were subsequently arrested.

"I'm sure we'll be found guilty," Wolfe said of the gang of grandparents, one of whom has since died. "Hopefully, they'll put me in jail. I think it would be great. The crime I'm trying to prevent is bigger than the crime I committed."

Wolfe is one of more than a dozen Vermonters who've been hauled off by police in the last year for protesting Vermont Gas' $154 million Addison Natural Gas Project, which would extend a natural gas pipeline from Colchester to Middlebury.

The pipeline's opponents argue that the project will force Vermont consumers to remain dependent for many years on an energy source derived from Canadian fossil fuels, some of which are extracted using hydraulic fracturing, aka fracking. "We have to keep oil and gas in the ground," Wolfe said. "We should not be spending money for a fracked-gas infrastructure."

The unusually persistent protests, mostly organized by the all-volunteer group Rising Tide Vermont, present a growing conundrum for authorities who want to discourage costly disruptions while also respecting free speech. Penalties, which so far have included fines, community service and probation, haven't been a deterrent, prosecutors say, so they are starting to seek jail time for offenders.

"In the past, people tended to say, 'I don't want a criminal record,'" said T.J. Donovan, the Chittenden County state's attorney, whose office is prosecuting Wolfe and other protesters. "This seems a little different. They're very committed. So our response has to change."

The ragged band of protesters has managed to sap the time of police, prosecutors and judges, soaked up media attention, and — Vermont Gas argues — put their own and others' safety at risk.

If people are tired of the protests, that's the point, said Avery Pittman, a 25-year-old Burlington resident who is one of the founders of Rising Tide Vermont. "We're tired, too," Pittman said. "This is part of the plan, that they get sick of us."

Pittman, who asked to be referred to by the gender-neutral pronoun "they," squirmed in a chair and drummed on the table during an interview with two other Rising Tide organizers last week at Burlington's New Moon Café. At the same time, Pittman calmly and concisely talked about the group's goals — the most ambitious of which is the "end of capitalism."

Protests are just one piece of Rising Tide's strategy to stop the pipeline. The group also knocked on doors in Addison County, rallied landowners and organized meetings to bring opponents together.

Other pipeline opponents — environmentalists, ratepayer advocates, landowners — have lawyers working to persuade the state Public Service Board to cancel its approval of the project, the cost of which has grown by $68 million since Vermont Gas' initial estimate.

That it's already under construction and has future corporate and community customers lining up doesn't change the reality: What once looked like a sure thing for Vermont Gas is now in question as the PSB reconsiders its certificate of public good.

Rising Tide organizers say they deserve credit — even if they can't say to what extent their slogan-chanting, sign-carrying, civilly disobedient members have altered the thinking of the suits that run Vermont Gas and the Public Service Board.

Protesters have locked themselves to doors, gates, excavators and pipes. They took over part of Montpelier's State Street for an entire weekend in October, with the polite acquiescence of local police, and on the following Monday blocked staff from entering the Public Service Department. In the end, though, the PSD offices opened on schedule.

Vermont Gas spokeswoman Beth Parent insisted Rising Tide's protests have done nothing to derail or delay the project. "They certainly have not stopped us and will not stop us. This is about clean energy and bringing more affordable options to folks in Vermont," Parent said.

Jane Palmer, a Monkton resident whose property is along the proposed pipeline route, disagreed. Without Rising Tide, she said she didn't think the opposition would be as organized or have garnered the media attention that it has.

"I don't think any of us would be as aware," she said.

Palmer was wary of the activist group at first. "I thought they were radicals. When I saw them in action, I knew better," she said. She eventually sought Rising Tide's help to organize a "knit-in" last year at Vermont Gas' headquarters, where she was arrested for trespass — a charged that was later dropped. She plans to join the group soon, but noted that it's a huge time commitment because of Rising Tide's thorough, by-consensus decision making. "I trust them not to do anything stupid," she said.

Other project opponents were less willing to say whether they cringe or cheer when Rising Tide protesters mobilize.

Paul Burns, executive director of the Vermont Public Interest Research Group, is fighting the pipeline project, too — but through lawyers arguing before the Public Service Board. "We're trying to convince them to make the right decision," he said. "I want to be careful not to give them a reason not to."

Pittman, a former University of Vermont swim team star, helped start Rising Tide Vermont in 2012 to fight climate change. The local group chose to affiliate with Rising Tide North America, which formed in 2006 with a guiding principle that states: "Real solutions to climate chaos are local in nature and come from communities themselves, not from the institutions that got us into this mess."

Translation: The group envisions a world in which communities, rather than corporations, make decisions such as where their energy comes from.

Don't they heat their homes using fracked gas and oil? Pittman bristled at the question.

"We don't have the autonomy to arbitrarily decide how to heat our homes. I don't feel a lot of guilt around that," said Pittman, whose Burlington apartment is served by Vermont Gas. "Right now the choices we have on all of those questions are really shitty choices."

From five founders, Rising Tide Vermont has grown to 20 core organizers who rely on hundreds for financial support — last year's budget was $10,000 — and to show up for protests.

Henry Harris is a 37-year-old contractor who grew up in Orleans County, moved away, then returned to Vermont to be part of the nonprofit's local chapter. He exhibited the same quiet intensity as Pittman, fidgeting in his chair and cracking his knuckles as he described the economy as "a burning building, and we've got to get out."

Deciding when and how to protest is a question Rising Tide members consider carefully. "We take a lot of time to deliberate what makes sense for us," Pittman said. "I've been surprised a bunch of times that things I thought would hurt our campaign were actually beneficial for us."

Pittman initially didn't like the idea of protesters chaining themselves to construction equipment but eventually deferred to the group. "I believe that working people shouldn't be attacked," Pittman said. "The reality is, I've had construction workers thank us for the work we're doing."

Rising Tide raises money to pay for lawyers and fines when members get arrested. Pittman got sentenced to community service after being charged with trespassing July 7 at a Vermont Gas construction site in Williston. A jury acquitted Harris last year of trespassing at Vermont Gas' headquarters in South Burlington. Stuart's excavator-chaining trespassing case is still pending. Prosecutors want her to spend two days in jail, "which we will be fighting," she said.

Prosecuting protesters is a balancing act, state's attorney Donovan said: "You can protest, but you can't just go onto a work site and endanger workers and equipment. We don't want to be overly punitive. We also want to deter dangerous protests."

Patrick Lamb, a deputy state's attorney who has prosecuted most of the cases in Chittenden County, has started requesting jail time for Rising Tide trespassers. So far, judges haven't gone along, he said, instead imposing fines, deferred sentences or community service.

If an 85-year-old great-grandfather who looks like Santa goes to jail for protesting the pipeline, is that a victory for prosecutors or protesters?

Wolfe is due in court for a jury draw on December 7. If Stafford's former Santa gets his wish, he could be in jail in time for Christmas.