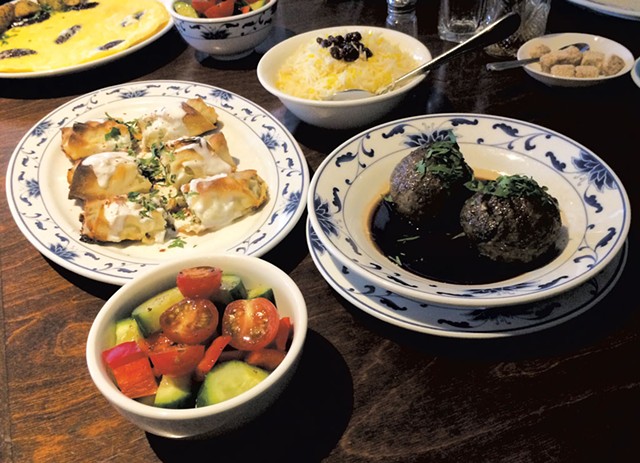 Hemela Pourafzal says that if you go to Iran and ask, "Where is a good restaurant?" people will likely tell you, "Don't go to a restaurant, come to my home." Pourafzal is the owner of Byblos Le Petit Café in Montréal. Proud of her native country's culture of hospitality, the energetic 78-year-old added that she tries to emulate it by making her patrons "feel at home if you come here."

While it is nearly impossible for Iranians to come to the U.S. under President Donald Trump's travel ban, American citizens can obtain visas to go to Iran. Dreams of travel to the Gulf state aside, sampling Iranian food in Montréal seemed like something I could do before, say, 1398. According to the Persian calendar, it is now the year 1397 and will become Norwuz, the Iranian New Year, on March 21, coinciding with the spring equinox.

But my sampling didn't start with Byblos. My first stop was Quartier Perse in the Monkland neighborhood, a stone's throw from Metro Villa-Maria. The bring-your-own-wine restaurant has a formal but old-school ambience, with white paper table covers over red tablecloths, Iranian art on the walls and a television screen showing logs burning in a fireplace.

Anticipating pungently spiced foods, I'd brought a bottle of Domaine de l'Attilon Marselan ($18.80 CAD at the SAQ), a voluptuous organic red wine from the Languedoc region of France. Two friends and I began with the zaitun parvadeh ($5), which had whole, mild green olives; crushed walnuts; and a pleasantly light sauce of pomegranate molasses. The mains came with rice, black tea, and either soup or salad. I chose the former, which was a much better choice than my friends' lackluster salad. The lentil soup, or ashe, was exceptionally creamy, with a lovely lemon flavor, a dash of chickpeas and a drizzle of yogurt on top.

Kebabs are probably the most common Iranian food found in restaurants, so we ordered a combo ($28). The joujeh kebab was chicken breast marinated in a lemon-saffron yogurt sauce that was a bit too subtle in flavor for me. Better, the koubideh kebab was made of ground, seasoned beef that had been formed around a metal skewer and then grilled. Served off its skewer, it was a foot-long spread of savory beef.

Fessenjan ($22.50), made with chicken breast, ground walnuts and loads of pomegranate molasses, is one of the most popular stews in Iran. Its long-cooked, chocolate-colored sauce was rich and slightly tart, though the chicken breasts were a little dry, and I wished for dark or bone-in chicken instead.

My favorite main was the zereshk polow ($27.50), a succulent lamb shank braised in puréed tomato sauce. It was served with saffron rice with dried barberries, which are ruby-colored berries that look and taste like cranberries' sexier cousin.

For the prices of the mains, I expected the dishes to be prepared with more care — garnishes of chopped herbs or pomegranate seeds, or fresher-tasting spices would have been welcome. Nevertheless, I left satisfied and ready to continue my Iranian food journey.

At Sunday brunch, I watched a snowstorm blow through the quiet streets outside of the Outremont restaurant Rumi, warming myself with a velvety hot chocolate ($3.50). Named for the 13th-century Persian poet, the light-filled, warmly decorated restaurant offers food from the spice route, including large parts of the Middle East and Northern Africa.

The firdaus omelette ($13) was made with organic eggs, melted akawi cheese and whole medjool dates. Served open-faced, it was cooked to perfection, with nary a brown spot. It came with a side of herbed, roasted potatoes, crispy on the outside and perfectly tender inside. After two bites of the omelette's sweet, gooey dates topped with salty white cheese, my friend and I made plans to replicate it when making brunch at home.

The Persian borek ($15) was a creamy, savory pastry filled with chicken breast, spinach, pine nuts and Parmesan, wrapped in a thin phyllo and drizzled with yogurt, fresh mint and a dusting of paprika. Sliced into thick pieces, it was perfect for sharing and was quickly devoured.

Tennis-ball-size meatballs of the koufteh ($16) made brunch even more decadent. Made with grass-fed beef, the two meatballs were stuffed with prunes and served with a honey-pomegranate sauce. The meatballs were delicately spiced with cumin and sumac and came with a side of basmati rice with barberries.

Rumi's menu is vast and tempting, and I'll definitely return for another brunch or dinner.

Byblos Le Petit Café is best known for its busy brunch, and its feta omelette, melon juice and jam offerings are particularly memorable. But this time I came for something else: the Persian stew called dizzy, only available at dinner on Sundays.

We started with a broad selection of mezzes, which came with excessive amounts of quality pita. My friend ordered the mirza ghassemi ($8), a dish from northern Iran. Served with sliced radishes, it was a purée of smoked eggplant mashed with turmeric, lots of garlic, a bit of egg for creaminess and pops of mustard seeds.

The cotton-candy-pink labon ($6), made with Greek yogurt and pickled beets, resembled the ambrosia salad from the church potlucks of my childhood but tasted delightful. The appetizer special ($9.50) included three mezzes: a creamy spread of Greek yogurt with wild, mild Persian garlic; room-temperature green beans with a tangy bell-pepper sauce; and a rich, sweet eggplant dip with roasted garlic, coriander and walnuts.

Quite satisfied with all of the starters, I checked out the uninspiring wine menu and chose beer instead: Unibroue's La Fin du Monde ($5.50). Its maltiness paired well with plates both delicate and pungent.

On to the mains: The kebab-e-mahi ($20.75) had generous cubes of grilled cod that had been marinated in yogurt, onions, lemon and saffron. Meaty and fresh, it came with a plate of shredded, lightly marinated beets. Dizzy ($20.75), also called abgoosht, is named for the individual ceramic crocks in which it is cooked.

Pourafzal explained that dizzy is a common dish in Iran that "rich people and poor people all eat" due to its nourishing content and rich flavor. The server brought our teal crock of dizzy with a wooden pestle stuck in the middle. She pressed down on the pestle, then strained the liquid into my bowl and said to eat that first. Cooked for four or five hours with Persian dried limes, saffron and tomato, its lamb bouillon had an umami-packed intensity that made my cheeks flush.

We were instructed to pummel the remaining lamb, chickpeas, tomatoes and aromatics and eat it with its accompaniments: fresh mint, dill and cilantro; white onion slices; and torchi, a pungent eggplant pickle. I indulged in all of them and savored the perfumed layers of flavor. We ate it with barbari, a chewy, stone-baked wheat bread with sesame. The dizzy and the entire meal was worth staying in Montréal an extra night.

En route to these meals, I recalled warm, animated conversations I'd had over beer and coffee with Saudi, Syrian and Iranian students of mine in Montréal last year. Traveling to each other's countries to replicate those friendly interactions now would be nearly impossible. But, stuffed silly after three days of Persian cuisine, I worried less about international politics and the actions of our quarreling leaders, a sentiment Pourafzal echoed.

"I have many American people like you who come. It's just the governments that are bad. Ours and yours," she said with a laugh. "But the people are very, very good together."

I'll break bread to that, especially if it's barbari.

The original print version of this article was headlined "Persian Delights"