The best way to prepare for a food shortage? Grow your own. 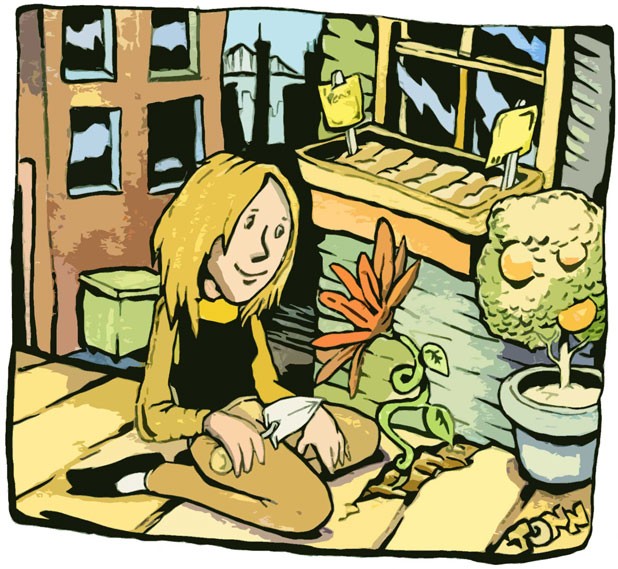 Strolling around his Burlington property, Jon Normandin identifies edible plant species like an experienced field guide. Dressed in navy workpants and a red-and-white flannel shirt, the white-haired IBM employee points out peach, plum, pear and cherry trees covered in delicate white flowers; blueberries and cranberry plants; pungent-smelling Egyptian "walking" onions, and herbs such as anise and tarragon. Next to his loamy vegetable garden, in the asparagus patch, plump green spears have pushed through the still-cold spring soil. These plants are just a sampling of Normandin's productivity.

Is he cultivating this Eden on 40 acres of rural Vermont heaven? Nope. Normandin grows orchard trees, vegetable crops and even a few ornamentals on less than a quarter-acre plot - which includes the space occupied by his house - in the New North End. "My grandfather was an orchardist," he explains. "He taught me everything he knew."

Growing food crops within city limits is a practice with a long history. The Inca did it in ancient Machu Picchu, using terraced gardens on the mountainside to produce food for local citizens. In the U.S., suburban and urban ag was prevalent during World War II, when so-called "Victory Gardens" produced around 40 percent of the vegetables consumed nationwide. These days, though, our nation's largest irrigated crop is green, often laden with petroleum-based fertilizers and herbicides, and is inedible. We call it "lawn." According to a 2005 NASA-sponsored study using satellite data, the country has 32 million acres of it.

But climate change and rising food and oil prices suggest that growing more food and less grass within city limits will become a necessity. That's motivating Burlington Permaculture, an association of Champlain Valley residents committed to improving "the quality and character of life in our community through urban agriculture, community educational offerings, local resource assessment, natural building projects and social networking," says their website. To boil it down: It's all about sustainability.

Founding member Michael Blazewicz became acquainted with Jon Normandin and his prolific property when Normandin answered his request for plant cuttings on the Burlington Freecycle website. Blazewicz, founder and owner of Burlington-based Round River Design, views Normandin's land as an apt example of just how much food can be grown in a small space. While teaching a permaculture design course at UVM, Blazewicz brought his students to the yard for a tour.

Over brews and snacks at Dobrá Tea, Blazewicz and fellow Burlington Permaculture founder, woodworker Mark Krawczyk, explain some of their views. They believe that educating citizens about and promoting the possibilities for urban gardening can "empower people to grow their own food and provide relief for some of the hunger and poverty," Blazewicz explains. He is involved with the Archibald Neighborhood Garden, a previously vacant lot that neighbors in the 'hood turned into a source of sustenance last year. Similar city gardens can be found on Buell and Hayward streets, as well as at the McCauley Square and Decker Towers developments.

But for Blazewicz and his associates, urban gardening doesn't just mean encouraging citizens to trade in sunflower beds for ones filled with salad mixes; it means getting Burlington city planners more attuned to creating sustainable food production in public spaces such as parks and greenbelts.

"They say that the Intervale produces 10 percent of the city's food," ruminates Krawczyk. "Where's the other 90 percent of the food coming from? That's something that should be addressed in developing the future of our city."

In order to increase food production, Blazewicz contends, "We need to have a focus on creating highly productive land." He's particularly passionate about the role that low-maintenance fruit trees, such as apples, can play in feeding hungry citizens. "If we can plant trees and every third one produces fruit, imagine that," he muses. "The city plants lots of trees."

In cities such as Boston and Philadelphia, nonprofits are exploring the idea of public orchards. In the latter, one group is working to turn abandoned lots into lush arbors that will feed low-income residents.

Normandin's fruitful yard, though not intended as a model of urban gardening, can still function as one for locals looking to use their own land more productively. For each of the 18 years he's lived in his squat, tan house - heated with vegetable oil collected from area restaurants - Normandin has experimented with plants that can grow in Vermont's cold climate, and he's explored the various microclimates in his yard. Next year, for example, he may transplant his cranberries to a moister area to see if they'll thrive there.

He's also planted trees in his neighbors' yards, in an effort to create an area full of honeybees and diverse pollen. "I've got a standing offer to my neighbors," Normandin says. "If you want a fruit tree in your yard, I'll buy it for you."

What's his motivation for all this work? "I've been thinking about food and oil shortages since the early '70s and the Arab oil embargo," he explains. "I see a food shortage in several years, and we'll need to have fruit trees. I'll be situated for it."

For the same reason, Normandin says he's tucked away 10 pounds of salt and 400 canning jars full of preserved foods, along with lots of frozen kale and chard. He's also got plans to create potable water from rainwater, to heat his home using geothermal energy, and to burn acorns for fuel.

While Normandin's approach may seem apocalyptic to some, nobody can deny that the rising cost of fuel is squeezing the resources of middle- and low-income Americans, and that food scarcity is a huge concern worldwide.

"There's no doubt that something is about to change," Krawczyk contends. "Things have been relatively stable, at least in our country, but tumultuousness is on the horizon."

But while planting a seed and watching it grow may be a simple, natural act, changing peoples' mindsets about the nature of public resources is anything but. Right now, plucking fruit or leaves from plants on Burlington's public property is illegal - an effort to protect against vandalism - and that effectively negates Blazewicz' dream of public fruit trees. The law also forbids foraging for fiddlehead ferns, greens or wild mint alongside the Burlington Bike Path and at the Ethan Allen Homestead, or picking raspberries and wild grapes that often grow in tangles next to city sidewalks.

But even if that law were to change, the privilege of picking fruit and legal foraging could be abused. That is, the utopian idea that folks will take only what they need is not necessarily the reality. Case in point: Normandin has planted a few fruit trees on public land with permission from Burlington City Arborist Warren Spinner. "Cars pull up at 3 a.m., and in the morning there's no fruit left," Normandin says. "That's part of the experiment."

But, as often happens in society, the bad behavior of a few may need to be overlooked for the benefit of the community. After all, there is theft at the Intervale Farms and the numerous garden plots overseen by the Burlington Parks & Recreation Department, but, by and large, both are highly successful food-producing ventures.

"As we start to hear about food-price increases throughout the world," Krawczyk suggests, "it's silly to think that the same thing isn't going to happen here. Those prices are going to get passed on, and fruit trees are going to take five years to produce fruit. Maybe we could work less and spend more time producing our food. It's a question of values and cultural norms."

Both men believe that implementation and public education must go hand in hand. Says Blazewicz,"There's a myth that edible plants aren't necessarily beautiful. But do you really want an ornamental crab apple, or an edible grafted variety?"

Sustainability sometimes comes with a slight sacrifice of aesthetics, as wind-power advocates have suggested. Normandin admits that some of his neighbors have complained about the vegetable-oil jugs littering parts of his property, and about the look of his garden, which he mulches with scrap paper and cardboard. "I'm a little controversial, a lot of people hate me," he acknowledges amiably. "But when I put out a table full of cucumbers, those that hate me take an armful of them."