Peril in the Pasture

A Vermont author dishes up dairy with a side of death 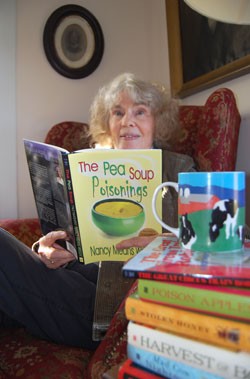 On a typical day, Vermont dairy farmer Ruth Willmarth milks her cows, fries up a warm batch of honey-dipped doughnuts, and chugs several mugs of strong coffee. But some of her days aren’t so typical. When the single mom isn’t busy mucking out the barn, she’s putting bad guys behind bars.

Willmarth, of course, isn’t real. She’s the feisty main character in a series of five mystery novels by Vermont author Nancy Means Wright; the latest, Mad Cow Nightmare, was released in 2005. The series is published by St. Martin’s Press, known for its mysteries and for bestsellers by James Herriot, Dan Brown and Augusten Burroughs.

Though few farmers — even in fiction — trade their plows for dastardly plots, murder mysteries with prominent food angles are more common than one might imagine. On Amazon.com, 234 tales have been tagged by readers as “culinary mystery products.” A website called Listology.com offers up 272.

Blending a stomach-filling subject with a stomach-turning one may seem like a recent innovation, but the story scholars call the first murder mystery is food-related. A whodunit from The Arabian Nights, “The Tale of the Three Apples” deals with deceit, a stabbing and some fruit. The names of more recent tomes range from the straightforward, such as Joanna Fluke’s The Fudge Cupcake Murder, to the fanciful: Dead Men Don’t Get the Munchies by Miranda Bliss, or The Main Corpse by Diane Mott Davidson. The colorful covers tend to contain recipes — often following each chapter — as well as plots.

That’s not the case with Wright’s books. Food is less a gimmick here than a thematic element — sometimes with progressive political overtones. Since Willmarth is a dairy farmer, nourishing others is her livelihood. When the feds try to quarantine her herd, claiming it may be infected with mad cow disease, she fights back — and solves a mystery in the process. An earlier tome, Poison Apples, features an orchard sabotaged with a mist of Monsanto’s Roundup herbicide, as well as the death of a Jamaican farmworker.

In some ways, Wright does conform to the conventions of her “cozy,” domestically oriented subgenre. The protagonist in a “food mystery” is often a divorced, middle-aged woman who takes up a culinary career — as caterer, baker, innkeeper or critic — after her husband skips out on her. No trained detective, she stumbles on a mystery and starts investigating. Romance often rears its head, as the main character succumbs to, or resists, advances from warm-hearted, occasionally mustachioed bachelors. In many cases, the writing leaves something to be desired.

True to the pattern, Wright’s heroine’s husband left her, and she ekes out a hardscrabble existence for her family while mourning his loss. In the meantime, an unnaturally patient, longtime friend acts as her sidekick but aches to be her lover.

But Wright offers a few elements such mysteries tend to lack. For one thing, her readers get a detailed taste of rural Vermont life, thanks to her strong sense of place: The stories are replete with verdant apple orchards, stubborn barnyard animals and bees swarming from their hives to feast on clover.

Wright’s liberal values are prominent, too. In one novel, a character tosses a “Take Back Vermont” sign off a cliff. Wright’s whodunits have featured same-sex couples, sympathetic characters who grow medical marijuana and a look at the legacy of Vermont’s infamous eugenics project. All of them show just how tenuous the livelihood of a small farmer can be.

One Amazon.com reviewer titled his or her assessment of Wright’s Stolen Honey “Paranoid liberal lesbians will love it.” “The liberal slant of this book is overwhelming,” the reviewer lamented. “It is like having Howard Dean scream at you all the time. Who is killing lesbians and sterilizing Indians nowadays? According to this book it happens all the time in Vermont. I can’t wait till the ending when Newt Gingrich is found out to be the murderer.” (He’s not.)

That reader might be surprised if he met Wright in person, because she doesn’t look the part of a political firebrand. A gentle, polite older woman, she shares a rural home with her engineer husband. Cows meander across a wallpaper border in the bathroom, and her husband’s model trains chug across the living room and through the backyard.

Wright sees herself as a mystery novelist, not an activist one. “I’m Unitarian Universalist, and we’re probably one of the most liberal religions, if you can call it a religion,” she explains. “I try to not put too many of my views in there, but I guess I can’t help it. That could be a problem, I guess.” Still, she says she’s never received any letters from folks upset by her impassioned opinions.

Although Wright began publishing in the ’70s — “I was writing with one foot in the diaper pail,” the mother of four exclaims — it wasn’t until the mid-’90s that she tried her hand at sleuthing stories. When she did, in the midst of a divorce, she “discovered that maybe I have always been a mystery writer, even when I was writing plain novels,” she recalls. “Most fiction has a mystery in it of some kind. It might not be the overt kind of mystery, it may be some secret somebody has deep down and doesn’t want anybody to know.”

The idea of a dairying detective was sparked by a real-life crime. Wright read a newspaper story about a pair of Vermont farmers too old-fashioned to bring their money to the bank. A couple of thugs, searching for an easy take, beat them nearly to death and stole their cash. How were the villains discovered? The money they were spending had the unmistakable aroma of a barnyard.

Intrigued by that crime, Wright began crafting a story called Mad Season, in which barns are burned, a young boy is kidnapped, and farmers Lucien and Belle Laroque are beaten and robbed. Ruth Willmarth discovers the farmers — both grievously injured — and gets involved in solving the case.

In Ruth, Wright strove to create a “different kind of sleuth,” she says. “I don’t think I knew of any single-mother dairy farmer [detectives] at the time.” She liked the notion of a character who stumbles into crimes and their solutions, rather than a hard-boiled police investigator. “The amateur detective is kind of like the writer herself trying to find out whodunit and why. That’s what I like most of all,” says Wright, who says she never plans out a book before writing it. “I’m the detective, in a sense, when I’m writing the book. I think if I knew what was going to happen, I probably would get bored and never finish the book.”

Given the books’ agricultural setting, Wright regularly mentions food, whether her characters are cooking, eating or milking. “Often things happen when they’re at meals,” she says.

But her most food-centric work is outside the Ruth Willmarth series. Wright’s award-winning children’s mystery The Pea Soup Poisonings (2006) deals with a group of children who band together to solve a murder case. The weapon: a bowl of poisoned pea soup. On the more appetizing side, the reader is enticed by mentions of zucchini quiche, lentil soup, meat loaf and chocolate cake prepared by various grown-up characters.

The book’s premise grew out of a real mystery club formed by Wright’s children and their cousins — and a real pot of safe, though unappetizing, soup. “I’m not a big cook, but I like to cook,” Wright says. “I love to go out and have really good meals. I always buy all my food at the local co-op. I love gardening.” But, as the volumes stacked around her house indicate, reading, not baking, is her “priority” leisure-time activity.

In a pinch, though, Wright can whip up a mean batch of Irish coffee, or her detective’s homey sweets. She did just that for three different murder-mystery cookbooks, including one called Murder: More Diabolically Delicious Recipes from Contemporary Mystery Writers. Her recipe for “Dairy Farmer Ruth’s Honey-Dipped Donuts” sounds delicious and simple, if you leave aside the deep-frying portion. “Along with gulps of strong hot coffee, Ruth’s doughnuts keep her fueled for the hard work of milking and sleuthing,” the introduction reads.

Coffee keeps Wright fueled, too, although she doesn’t write as manically as other authors. “I don’t do a book every year like Archer Mayor does. My books have come out every two years, and I’m happy with that,” she says, adding jestingly that she earns “enough to keep me out of a psychiatrist’s office, but not enough to pay for a psychiatrist. I need to have a life [outside of writing]. I do a fair amount of activism, and I work for the Vermont Humanities Council.”

To make sure she gets all of the details right, Wright researches extensively while writing. For Poison Apples, she interviewed a man who was once employed spraying orchards with pesticides. The Jamaican workers’ harvest feast — featuring a big pot of goat stew — came from life, too.

When writing about how Willmarth’s herd is seized on suspicion of mad cow disease, she hooked up with Linda and Larry Faillace of East Warren. In 2001, the USDA destroyed the couple’s herd of 125 sheep — and their livelihood as dairy farmers.

Given the way things play out in Mad Cow Nightmare, Wright isn’t sure it makes sense to bring Ruth Willmarth back as her main character. Right now, she’s meditating on a new sleuth — a cheesemaker with her own herd of goats. Without offering any plot details, she maintains that chèvre won’t be a main ingredient.

Whatever she chooses to focus on, Wright will try to make sure it isn’t an open-and-shut case. “The big problem with writing mysteries is that people say they’re formulaic,” she remarks. “You have to have a murder of some sort, and it has to happen near the beginning of the book or the reader gets bored, and the bad guy gets caught in the end.”

But the myriad problems facing Vermont’s small farmers don’t lend themselves to easy assignments of goodness and villainy. Sometimes farmhands are fatal, underdogs act unscrupulously, and cows kick their caretakers. “Whenever possible, I try to break the formula,” Wright says. “I like to leave something hanging. My editor will say: ‘You have to tie up all the ends.’ I’d rather not tie up all the ends.”