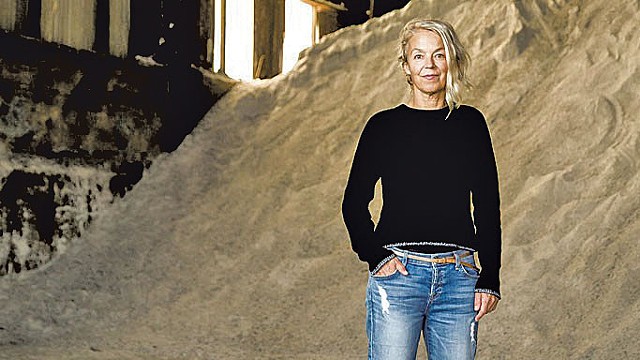 "Talking about smells can feel a little like talking about dreams — often tedious, rarely satisfying," wrote New Yorker writer Rachel Syme in a recent essay about how difficult it is to find the words to describe aromas. But her article arrived in January amid a wave of media coverage on the significance of smell in our everyday lives, a topic central to understanding the coronavirus.

Loss of smell and taste is a hallmark symptom of COVID-19, and some patients have reported being unable to smell for months after they had otherwise recovered from the virus. In the February issue of the Believer Magazine, writer Sasha von Oldershausen reported that when her sense of smell returned after contracting the virus, she became haunted by a lingering scent of onions everywhere she went. The New York Times Magazine, too, devoted a recent cover story to the mysteries of olfactory perception.

Much of the writing about scent observes that we don't have an expansive vocabulary for smell. Of all the human senses, it's perhaps the most subconscious, so many people notice it only when faced with the threat or actuality of losing it.

Orwell's Diane St. Clair has been making perfumes and extracts through her business St. Clair Scents since 2018; before that she studied for years with professional perfumers. (She's also known for her hand-churned Animal Farm butter, which sells to prestigious restaurants.) But even she acknowledges that scent can be hard to conceptualize.

"You're actually always smelling," St. Clair said of the roughly 20,000 breaths people take in a single day. "But it's so vital to your being that it's almost this unconscious sense." 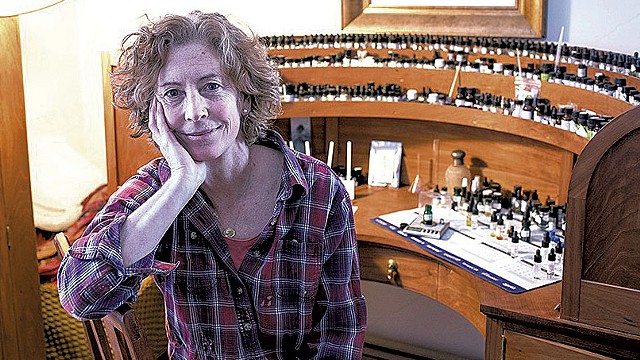 When St. Clair sends out her scents — she currently has eight unique ones for sale online — she said she likes to include a card with a piece of art or some other kind of visual clue for the buyer. For her latest scent, created over several months in 2020 and called Seeking Balance, she partnered with Colchester-based multidisciplinary artist Erika Senft Miller. The women engaged in a collaborative, creative conversation that ended with a completed scent and a watercolor painting to accompany it.

The pair met when Senft Miller commissioned St. Clair to create custom perfumes for each of the former's two daughters as gifts. Since then, Senft Miller, who hadn't been particularly into perfumes before, became an avid wearer and fan of St. Clair's scents.

Senft Miller is best known for large-scale performance-art installations and has included elements of smell in her work before, so she appreciates olfactory sensation.

"It's so deeply connected to our emotional body and bypasses all that frontal lobe and cognitive filter and goes right into our emotions, which makes it so potent and which also makes it a little elusive," she said.

When the pandemic hit and Senft Miller couldn't coordinate in-person shows, she took to Instagram, "the proverbial sidewalk of the pandemic." She contemplated the irony that, while people were continually worried about excessive screen time, many of our social, work, and educational obligations and opportunities had moved online.

"Scent is the one thing we can't digitalize," Senft Miller noted.

St. Clair was similarly wondering how to express the contradictions of the pandemic era in her work. She felt inspired by balance.

"There's this whole field of research going on around olfaction." Diane St. Clair tweet this

"Whenever I make a perfume, I always have to have some idea, some vision of where it's going. Sometimes it's something very physical, like a garden. But this interested me because it's an abstract concept," St. Clair said. "There weren't any clear olfactory clues."

St. Clair and Senft Miller began emailing. "Originally we talked about 'finding balance,' and then we changed it to 'seeking balance,' because really balance is not a state, it's a process," Senft Miller said.

The perfumer asked the artist to create a visual component to go with the scent. During the seven months when St. Clair was developing Seeking Balance, she sent different versions to Senft Miller, who took her time opening and smelling them and chose the medium she felt inspired to use: watercolor, which Senft Miller said wasn't a common choice for her. 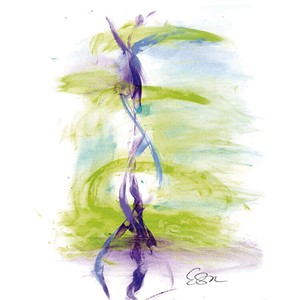 With each iteration of the scent, she would find a space within her house to place her body off-balance — standing on one foot or crouched on her staircase — and paint. She digitized the paintings and sent them back to St. Clair; when a new version of the scent was ready, Senft Miller would paint again. All the while, the two mused back and forth via email about what balance meant in 2020.

"I'm lucky that we have a multisensory performance artist here [in Vermont]," St. Clair said, "because I think if I had asked anybody else to do it this way, they would have been like, 'What?'"

"I'm not a musician, but I imagine if you play jazz, it's like that," Senft Miller said. "We were so connected."

The end result was twofold: a unisex scent that St. Clair describes as rich, calming and centering, including notes of lavender, bergamot and citrus. Its accompanying abstract painting is purple and green.

St. Clair is most excited about the idea that the pandemic could inspire people to pay more attention to their sense of smell.

"People do think that perfume is just stupid, because most of it is just stupid," she said. "And yet, there's this whole field of research going on around olfaction." Museums, St. Clair said, are experimenting with producing scents associated with different works of art.

"That sense of smelling, it removes the gap between being the person viewing it and something on the wall," she said. "Anytime we can integrate aspects of the arts, it makes it a more powerful thing."