People Gathered at a Montpelier Gazebo — Until the City Removed It

Susan Merchant stood in an empty lot near downtown Montpelier and let out a heavy sigh. Twenty minutes earlier, a municipal crew had hauled away the red wooden gazebo that had occupied that spot, between a Shaw's supermarket and the Savoy Theater, marking the bitter conclusion of a two-year debate about how to address the growing visibility of homelessness in the state capital.

By the time the public works crew arrived, just after sunrise last Thursday morning, a small throng had gathered to hold a vigil for the final moments of the gazebo, known as Guertin Parklet. Several of those present, like Merchant, live in nearby motels or campsites outside the city, and they had come to rely on the structure as a gathering place and respite from the elements. When Merchant arrived in Montpelier last summer after losing her job in Tennessee, one of the first places she'd spent the night was on the gazebo's boarded floor. Guertin Parklet, she said, served as a community center for a variety of people, both housed and unhoused.

Now, it was gone. Merchant had cried when the backhoe operator eased the structure onto a flatbed trailer, and someone in an apartment above the Savoy opened a window to shout over the din: "People are trying to sleep!"

On April 27, the city council voted 4-2 to remove the parklet, answering long-standing complaints from some residents that the site had become a hotbed of substance use and other illicit behaviors at the gateway to the downtown shopping district. But critics of the council's decision say that taking away the gazebo is a misguided attempt to hide problems of addiction and poverty that certain residents would rather not see. Those issues, they insist, won't vanish with Guertin Parklet.

"How far are we going to take this so that folks feel comfortable in town?" asked Councilor Conor Casey, who voted against removing the gazebo. "Do we want to remove all the benches, too, so people won't sit on them? What's the logical conclusion of all of this?"

The city had already moved the gazebo once, due to persistent complaints about the behavior of some of its regulars. Over the past four years, police and EMTs responded to more than 50 calls about incidents at the gazebo and 13 reports of suspected drug overdoses and other medical emergencies. By the time the city council took its vote, the Montpelier police, fire department and ambulance service were dispatching personnel to Guertin Park more often than to any other location in the city, according to city manager Bill Fraser.

"We [were] putting the bulk of our public safety resources into that one site for all kinds of bad behaviors," Fraser said. "I wouldn't have recommended that we move it if people were just sitting there. But there's a big difference, in my mind, between people sitting somewhere all day and multiple fights, fires being set, open drug use, public drunkenness, all of that. That's not how city facilities should be used."

Merchant did what she could to clean up litter around the gazebo. "I wasn't going to sit among debris and beer cans and dirty food containers," she said. "I didn't want that to be the first thing people saw when they came into Montpelier."

But a vocal faction of Montpelier citizens viewed the parklet as a public nuisance. In a letter to Fraser, published in the Montpelier Bridge in January, resident Richard Sheir said he often heard people lament that "the structure on Main makes our town look like the worst sections of homeless [sic] in Seattle and San Francisco." The police had been too lenient about drinking and drug use at the parklet, Sheir wrote, and he feared that they would "next turn a blind eye to a burn barrel inside the structure to stay warm."

"That would be the final indignity," Sheir's letter reads. "The complete take over. The end of any notion of the rule of law in the structure."

But many others, such as Merchant and Casey, worry that the removal of the gazebo will put an already vulnerable population at even greater risk. Without a year-round shelter in Montpelier, the closest overnight option for people experiencing homelessness is in Barre. Since the spring of 2020, the state has used federal funds to provide motel rooms to more people experiencing homelessness than ever before, but that program has not been a panacea, either. For better or for worse, Merchant said, some people will always prefer to live outside. "You could give them a mansion on the beach, services, and they're still gonna go camp out," Merchant told city councilors during the April 27 debate on what to do about the structure.

In 2019, the city convened a Homelessness Task Force to come up with solutions to the more immediate problems facing the unhoused, including a lack of public showers and restrooms in downtown Montpelier. Some initiatives have proven more shovel-ready than others. In its meeting on the fate of the parklet, the city council approved the installation of 12 storage lockers behind the Montpelier Recreation Center for people experiencing homelessness — a proposal the Homelessness Task Force had previously floated, with no success. A restroom committee, created last summer to investigate the possibility of a 24-7 public toilet, has yet to meet.

Guertin Parklet, named for the late Jed Guertin, a clean-water advocate who died in 2017, was first installed in the summer of 2018 as a rest stop along the city's bike path, near a pedestrian crossing over the Winooski River. The Guertin name became attached to the parklet by happenstance, according to Page Guertin, Jed's widow. "We didn't donate any money for its construction," she said. "They'd already built it, and they needed someone to dedicate it to, so they picked Jed." For her part, Page Guertin opposed the city's decision to remove the parklet without first creating an alternative gathering spot. "I feel like taking the structure away is exactly the wrong thing to do, because it removes the incentive to do anything meaningful," she said. 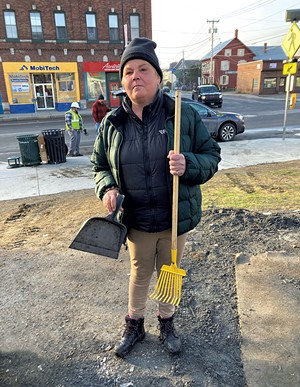 In its original spot on the bike path, the covered structure quickly became a refuge for people who lacked options for shelter — particularly during the pandemic, when the closure of most indoor public spaces forced greater numbers of people outside, according to Fraser, the city manager. Bike path users began to complain with increasing frequency that they felt menaced by the presence of people who sat in the gazebo all day, drinking and occasionally being rowdy.

Last November, the city moved the structure to a vacant lot on Main Street, the former site of a discount liquor store and bottle redemption center. City officials thought that people might be less likely to drink and use drugs in such a prominent location, just steps from Montpelier's historic downtown. That theory did not hold. "Nothing changed," Fraser said. Through the winter and spring, the complaints mounted in response to the gazebo's increased visibility.

In turn, that visibility rankled the people hanging out in the gazebo. "When it's right on the street like that, it's almost an attraction for people walking by, looking at us, like, 'Hey, what's our entertainment for the day?'" Merchant said. "That kind of attention can become a trigger for people who wouldn't otherwise be triggered. They're just trying to be someplace for a while, you know?"

Some who opposed the gazebo's removal, including Merchant, acknowledge that it was far from an ideal solution to the problem of people needing a place to congregate. But they also note that Guertin Parklet's central location, and the community it fostered, came to serve as a kind of safety net. "The park fulfilled a lot of unmet needs," said Ken Russell, the chair of the city's Homelessness Task Force and executive director of Another Way Community Center, a nonprofit that offers peer support for people facing mental health crises.

In at least one case, Russell said, someone at the park was able to receive life-saving medical care because an ambulance could get to him in time. Someone else sought counseling at Another Way — in part, Russell believes, because he had earned the person's trust by spending time at the gazebo. People at the parklet shared information with one another about how to navigate the state's labyrinthine social services network, and they created systems of mutual aid, Merchant said.

After she got her motel room in Barre, she came back to Guertin Parklet every day to help people get what they needed — a hot meal, a pair of clean socks, a phone number to schedule a ride to an appointment. She became a trusted face in the community, she said, which allowed her to connect with people who might have rebuffed assistance from first responders or social workers.

For Russell and other service providers, the loss of the gazebo means that more people will likely disperse into campsites, which are often harder to reach in an emergency. For this population, Russell said, that inaccessibility could be a matter of life and death. "People in campgrounds are vulnerable and exposed," he said. "And they die, and die earlier, because of everything they're up against."

Meanwhile, municipal bureaucracy moves at its own pace. The city has allocated $425,000 for the Homelessness Task Force, part of which will go toward hiring a consultant to advise the panel on how to spend the rest of its money. Fraser said the lesson from Guertin Parklet is that people need somewhere to gather, but "the idea is not to create one central place." Casey, the city councilor, said he's troubled by the implications of that approach.

"People can't be an eyesore," he said. "And that's where I get uncomfortable. Looking at these people — it's like looking in the mirror. It's a reflection of society, and these are the people you failed."

On Thursday morning, a few hours after the city had trucked the gazebo off to the municipal yard waste depot for storage, a contingent of its former denizens had already migrated to a pair of picnic tables near the Winooski River. The tables sit a few dozen yards from where Guertin Parklet last stood and a short walk on the bike path from the place where, in 2018, the city first tried to create a small nook where people could just sit and be.