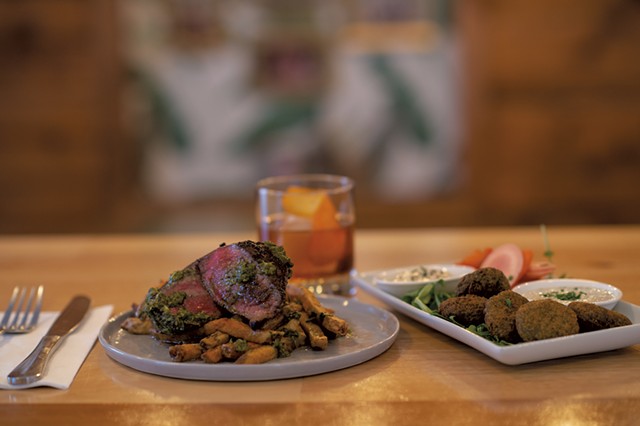 Valentine's Day 2020 marked a top day of business for Peg & Ter's in Shelburne. The restaurant on Route 7 threw a party with music by the Hokum Brothers; couples and non-couples attended the festivities.

"It was so much fun," Peg & Ter's co-owner Johnny Helzer said. "We finally got some momentum — and then it was just, like, boom!"

A month after the holiday, restaurants in Vermont were forced to halt in-person dining in order to stem the spread of the coronavirus. Not yet two years old, Peg & Ter's had been finding its place in the community: a bar for grown-ups, with cocktails and tapas-style plates. You'd go for the gin and stay for the Brussels sprouts.

In the months since the mandated closure was lifted — and replaced by an evolving set of requirements — Peg & Ter's has operated in a variety of modes: in-house dining at reduced capacity, outdoor dining, takeout and specialty products for purchase.

This winter, the restaurant that Helzer and his wife, Tina, opened in June 2018 is open for takeout three nights a week. The menu changes regularly, offering items to suit a range of tastes — vegetarian, kid-friendly, adventurous, comforting. 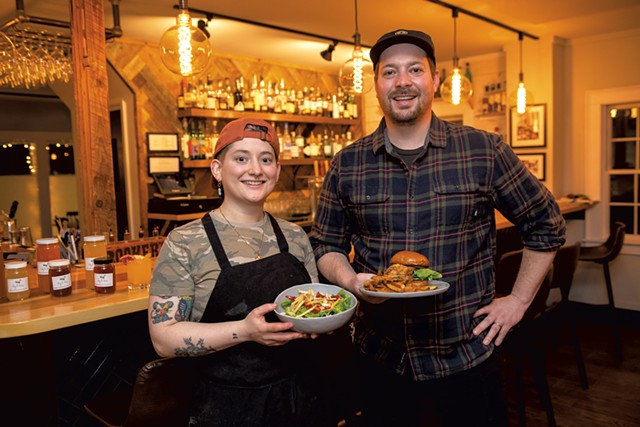 The chef is Karina Curcio, who worked as sous chef with Corey Perkins, the restaurant's opening chef. After Perkins left last fall to become manager at Stone's Throw Pizza in Richmond, Curcio replaced him.

"She stepped up and took it on and had an amazing attitude," Helzer said. "We're so thankful to have her back there."

My daughter and I ate dinner from Peg & Ter's in our kitchen twice in the past two weeks. While I missed sitting at the bar in the center of the restaurant's casual and convivial dining area, I discovered a few unexpected takeout pleasures. One of these was frying my leftover herby French fries for breakfast and eating them with a sunny-side-up egg.

You go for the gin and stay for the Brussels sprouts. tweet this

That breakfast delight followed the realization that fries don't travel well in 3 degree weather. But a Peg & Ter's medium-rare steak, happily more rare than medium, was A-OK after my six-mile ride back home.

The six-ouncer was the first takeout steak ($16) I've ever eaten. It retained all the qualities I savor (about twice a year) in a steak: bloody red and juicy, plus texture more chewable than pasta or tofu.

The wondrous aroma of cauliflower also holds its own on a trip from the suburbs to the city. I inhaled it through a mask while singing along to a Richard Thompson tearjerker.

At home, I piled the cauliflower ($13) and crispy Brussels sprouts ($11) on a plate along with the steak; the meat's juices and house chimichurri melded with the vegetables. My daughter and I nibbled on lemon cake ($6) as she ate falafel ($12) and I ate my meat. (Another bonus of eating restaurant food at home: You can mix and match the courses.)

On our second haul from Peg & Ter's, my dinner more closely resembled something we often prepare for supper at home: soup ($9) and salad ($10). We also ordered the fried chicken sandwich ($13) and macaroni and cheese ($10). This time, the temp was mid-20s, and the three-cheese mac was warm and luscious even after transport.

The romaine salad was top-notch: crunchy as advertised and pretty, with slivers of red pepper and toasted almonds. It also was sprinkled with black and white sesame seeds, a nod to the sesame-ginger vinaigrette. I ate the salad for a first course while reheating the soup and toasting my roll. (Bonus No. 3: You can't make toast in a restaurant.) The white bean soup with mixed vegetables, including kale, potato, carrots and celery, was just right for a wintry night.

Because we were so hungry when we began our meal, I set aside my showstopper cocktail: an old fashioned made with cocoa-nib-infused bourbon, Angostura bitters, orange flower water and simple syrup ($17). 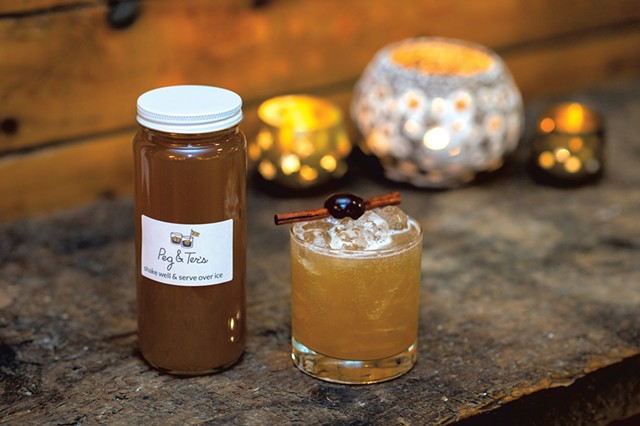 I saved the drink to have with our dessert: Peg & Ter's tiramisu ($7) with toasted almonds and amaretto. We ate this in front of the TV, watching "Law & Order: Special Victims Unit." If you get the chance to re-create this experience, I recommend it. It's possible even if you don't carry home the drink in a jar. Bar manager Nick Roy's cocktail syrups are available for purchase, so you can attempt to mix his old fashioned — and other house cocktails — at home.

In another business adaptation, Peg & Ter's is partnering with Meg Dawson, owner of Das ButterHaus. She's baking in the restaurant, which will feature her desserts on the menu, according to Helzer. And on Thursdays, Peg & Ter's is a pickup spot for seafood purveyor Wood Mountain Fish, which trucks seafood to Vermont from the Boston waterfront.

Folks known to the restaurant as "Pegulars," aka local frequent diners, have helped sustain the business through a challenging year, Helzer said. Week after week, he noted with appreciation, they've "put their money where their mouth is." The restaurant has also received financial assistance in the form of loans and grants — an aspect of the business managed by Tina. The Helzers live with their three young daughters in Charlotte, where Johnny grew up.

He's looking forward to the time when people can gather again at the restaurant, which he hopes will be open to diners in May.

"I think about it every day," Helzer said. "I come in here; it's like an empty place. You miss that interaction so much. We're thinking about bringing that back and how meaningful these social interactions are going to be."