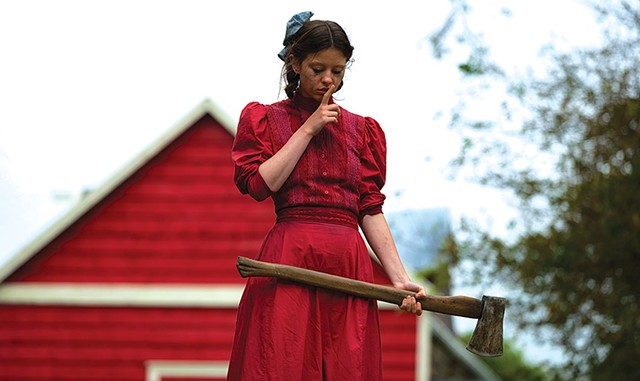 A prequel to a slasher film that came out just six months ago may not seem a likely candidate for cult status. But if you saw Ti West's X in March, with its memorable double performance by Mia Goth, you may have an inkling of why horror fans anticipated Pearl, an origin story for its villain. On TikTok, young women are dressing up in blood red like the film's title character and turning sound bites from her dialogue into memes. How did an ax murderess get so popular?

It's 1918. World War I and the flu pandemic are raging, but things are all too quiet on the Texas farmstead where Pearl (Goth) lives with her German immigrant parents, waiting for her soldier husband to come home. While Pearl's grim-faced mother (Tandi Wright) urges her to care for her paralyzed father and put her own dreams aside, the young woman escapes into a world of fantasy, sneaking off to the movies and entertaining the livestock with dance routines.

When she gets particularly fed up with Mom's nagging, Pearl spears a gander on a pitchfork and feeds it to the alligator in the pond — because, yes, despite its cheery Technicolor palette, this is a horror movie. As Pearl's dreams fight a losing battle with reality, her violent tendencies blossom.

If you don't have a stomach for gore, you're never going to see this movie. If you're a gore fan who's bored to tears by the overwrought theatrics of classic Hollywood musicals and melodramas, Pearl isn't for you, either. But if you happen to exist in the tiny Venn diagram overlap of people who love horror and the glossy aesthetic of Douglas Sirk movies, get to the theater. West has made your Citizen Kane, and Goth could be your long-shot pick for an Oscar.

Hyperbole? OK, maybe — but Pearl embodies the principle of "Go big or go home." This is a film that showcases a seven-minute, one-shot monologue in which a sociopath earnestly explains her worldview, a film that evokes the imagery of The Wizard of Oz only to stage a scene in which its fresh-faced, love-starved heroine makes out with a scarecrow in a cornfield. And somehow it works!

Pastiche and period pieces are nothing new for West. His 2009 breakout film, The House of the Devil, was set in the early '80s and paid homage to the heyday of VHS horror. Scary as it was, it was easy to dismiss as a film nerd's stylistic exercise. X is a pastiche, too, with obvious parallels to The Texas Chain Saw Massacre. But in that film, West used the viewer's historical perspective to draw out perennially compelling topics: ageism, the generation gap, the technological shifts that can render an artist's work obsolete.

The screenplay, which West and Goth cowrote, is simple and refreshingly period appropriate, with few winks at modern viewers. Viewers who haven't seen X won't be confused. And the central performance is transfixing. With her transparent features, reminiscent of the young Judy Garland, Goth makes us feel Pearl's desperate need to escape from her mother's doctrine of hard labor. Her dreams are so big that they light up her whole face, turning her incandescent.

Pearl reminds us of countless classic figures in American cinema whose striving makes them inherently sympathetic — the problem is, she won't stop at anything to attain her goals. "I feel things very deeply!" she screams at a suitor who sees the peril too late. When the world refuses to cooperate with her dreams, she does her best to reshape it — with a pitchfork or an ax.

It's an origin story reminiscent of Joker. But Pearl is less generous to its heroine: She's less a victim of social persecution than of her own delusions. Pearl embodies the possibility that inside every bright-eyed theater kid or would-be social media star, every sweet young American with a dream, is a core of ruthlessness. We may turn from the character in repulsion, but we can't deny her raw energy or that of this dementedly exuberant movie. With its pandemic imagery, Pearl transcends pastiche to become creepily relevant.

The original print version of this article was headlined "Pearl 5"