Downtown Barre's storefronts and stone sculptures always catch my eye on the way through town, whether I'm getting a glimpse of the old Coins & Hobbies shop promising rocketry and railroading or seeing the giant zipper as I zip by. But a new sign — and a prominent stone object — have made me stop twice this month.

Pearl Street Pizza opened in the left-hand side of AR Market in early January. The restaurant announces its presence in the market's big front windows with a glowing neon slice of pizza and an impressive Stefano Ferrara Forni brick oven.

The pizza place has a symbiotic relationship with the neighborhood market and deli, which Pete Roscini Colman opened in fall 2020, and with Colman's Vermont Salumi curing facility, which anchors the back of the building.

For several months in 2021, the space now occupied by Pearl Street Pizza was AR Wine Bar. That's where the new business' three co-owners — Wilson Ballantyne, Stefano Coppola and Chris Ruiz — were socializing when they decided to team up.

"With such limited ingredients, everything has to be the best." Stefano Coppola tweet this

Ballantyne and Coppola met while attending New England Culinary Institute a decade ago. For several years, they casually discussed opening a pizza biz while Coppola ran his nearby Morse Block Deli & Taps and Ballantyne worked at Magic Hat Brewing and Hill Farmstead Brewing. The duo purchased the oven without knowing where they'd put it.

"It was sitting in storage, just stressing us out," Ballantyne said.

Ruiz moved to Barre from Alabama in September 2020 and got a job at AR Wine Bar. He'd thought of opening his own bar, but he didn't want to deal with serving food.

"We'd come in multiple times a week and hang out with Chris, talking about where we could put the [oven]," Coppola said. "One thing led to another, and we asked if he wanted to be our third partner."

They initially planned to set up shop in the former Soup n' Greens Restaurant down the road, but that space needed a lot of work. Then Colman brought up the possibility of taking over the wine bar area.

"It was perfect timing," Coppola said.

They moved the oven out of storage and into the front window of the historic Homer Fitts department store building, which Colman had recently purchased. In another full-circle twist, the partners bought equipment from NECI after the school closed.

For our first visit to Pearl Street Pizza, my husband and I drove to Barre without a reservation. We lucked into a seat at the pizza bar, right beside the beautiful blue oven. It was just after 5 p.m. on a Saturday, and if we'd been any later, we never would have gotten what Coppola called "the best seat in the house."

Our luck quickly ended. The restaurant's wood-fired Napoletana pizzas and its pan-baked, square, grandma-style pizzas have been equally popular since opening, Coppola said. But there'd been a rush on grandmas that day, and they were sold out.

While we reformulated our plan, we watched a constant flock of 14-inch, lightly charred Neapolitan-style pies fly into and out of the oven. The three pizza makers danced around hot spots and one another, wielding long-handled peels in the compact space.

We started with the meatball al forno ($12) and seasonal burrata salad ($12). Cheese salad is a trend I can get behind, especially when cream and stracciatella burst from a ball of local burrata over crunchy, pickle-y vegetables. I also never say no to a massive meatball — in this case, a wood-fired one served over rich polenta with red sauce, shavings of Parmigiano-Reggiano, extra-virgin olive oil and fresh basil.

I eyed the pasta of the week, a rotating special made by head chef Sara Chase, and the dish's wine pairing. But witnessing the pizza dance had influenced our decision, and we opted for a classic Margherita ($15). 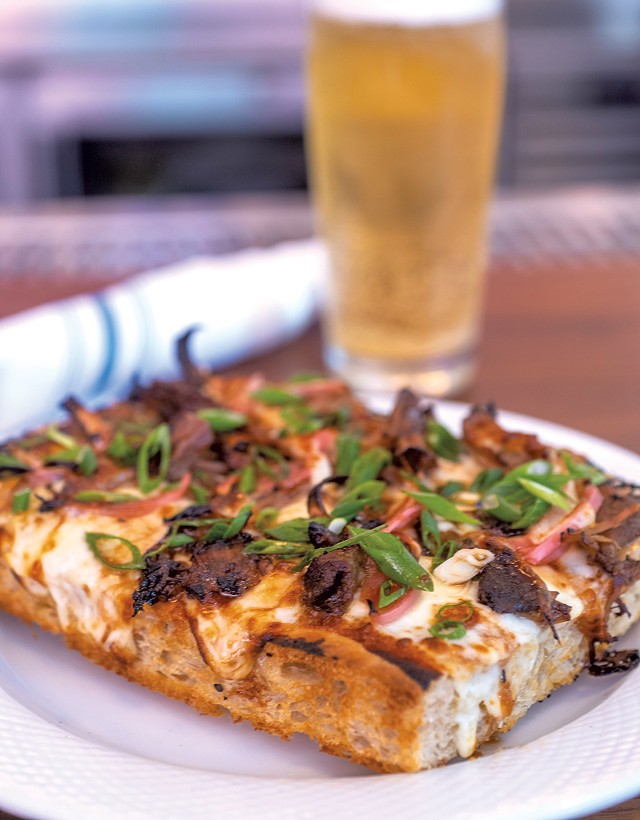 The simple toppings on Pearl Street's Margherita pack a big punch, including Gustarosso DOP San Marzano tomatoes — the "king of tomatoes," according to Bronx-based Italian specialty food importer Gustiamo, which supplies them to the restaurant.

"When we first tasted these tomatoes, Wilson and I sat down and literally ate the whole can," Coppola said.

The mozzarella on the Margherita, too, is a prize: It's from Rogers Farmstead in Berlin, which stopped making the high-milk-fat, yellow, flavor-packed mozzarella during the pandemic. Co-owner Nate Rogers hadn't planned to bring it back, but Coppola talked him into making it exclusively for Pearl Street.

The 48-hour fermented dough is made with King Arthur Baking's finely milled '00' Pizza Flour for the traditional Neapolitan style: thin in the middle with a bubbled edge.

"With such limited ingredients, everything has to be the best," Coppola said.

Ruiz crafts clever cocktail specials each week. On my initial visit, I opted for a fernet and cola ($8) from the standard cocktail menu to cure a twinge of carsickness. Once that revived me, I ordered the special Raining in Kyoto ($13), made with Nobushi Japanese whisky, house sour mix, spiced wine, Japanese bitters and a pinch of salt. It was a surprising take on the classic New York Sour. Pearl Street also serves a Barre City Sour ($12) with Woodford Reserve bourbon, sour mix and red wine.

On my return visit, I opted for a big mug of beer. Pearl Street has two Lukr faucets, the Czech side-pull taps used for pouring lagers. Hill Farmstead's Mary ($8), a German-style pils, was exactly what I wanted to go with a big ol' grandma pie.

Popularized on Long Island, grandma pie is now a staple of the vast and varied New York City pizza scene. Pizzerias use the term for everything from thin, crispy slices to thick, almost Sicilian-like pies, as long as they're square or rectangular rather than round.

Pearl Street's version is thick — roughly two inches — but not as thick as a traditional Sicilian pie, which has a longer proofing time. To the same flour used for the Neapolitan-style pies, the pizza makers add a bit of wheat flour and house sourdough for leavening instead of fresh yeast.

The 12-by-16-inch grandma pies are cooked in a pan in a standard oven, rather than directly on the wood-fired oven deck like the Neapolitan-style pies. The dough is topped with housemade sauce and a mixture of mozzarella and brick cheese, the Wisconsin specialty traditionally found on Detroit-style pizza.

The result is a crispy, golden-brown crust and an interior that's somehow both fluffy and dense. Picking up a slice is an arm workout.

"We can load that thing up to the point where it weighs 6 or 7 pounds," Ballantyne said. More toppings cost extra: $3 per full pie for peppers, onions, hot honey or basil; $6 for mushrooms, ricotta, pickled peppers, anchovies, Vermont Salumi house sausage, or cup-and-char pepperoni; $9 for Vermont Salumi bacon; and $12 for prosciutto di Parma.

The plain cheese pie is just $24 — perfect for a crowd with young kids "or teens who are going to crush your pantry," Ruiz said.

"We're trying to keep it affordable but also give people an option to really go for it if they want," Ballantyne added.

We landed somewhere in the middle, putting peppers on the whole thing, house sausage on one half and pepperoni on the other. The tiny, curled-up pepperoni cups get super crispy edges and drips of fat in the middle as they cook. They're irresistible, but I also wanted to honor Pearl Street's shared location with Vermont Salumi. I was thrilled when the sausage curled and cupped exactly the same way.

The pie came cut into eight slices, and I managed to eat two — barely. As I went out the door with a full box of leftover pizza, Ruiz reminded me that the quarter-pie I'd eaten was the equivalent of Pearl Street's by-the-slice option ($8 for cheese; $10 for pepperoni).

The restaurant is open Wednesday through Saturday starting at 11 a.m. and offers takeout. "During lunch, we see a lot of people getting a slice and a beer, and we already have our regulars," Ruiz said. "But we also have families who have a huge going-out night and get four or five pizzas and a bottle of wine for the adults — and everything in between."

"No matter what your income level is, who you are, where you're from or what your creed is," Coppola said, "this is somewhere you can come and enjoy some food and have some good conversation."

The co-owners are working on adding outdoor seating in the Pearl Street pedestrian walkway, where the restaurant's entrance is. (AR Market has its own separate entrance on North Main Street.)

They're also scheming up Sunday brunch, which will feature eggs Benedict served over polenta with focaccia, Vermont Salumi rosemary prosciutto cotto, poached eggs and hollandaise. And, in a stroke of genius, a breakfast sandwich made on a folded grandma slice.

The original print version of this article was headlined "Upper Crust"