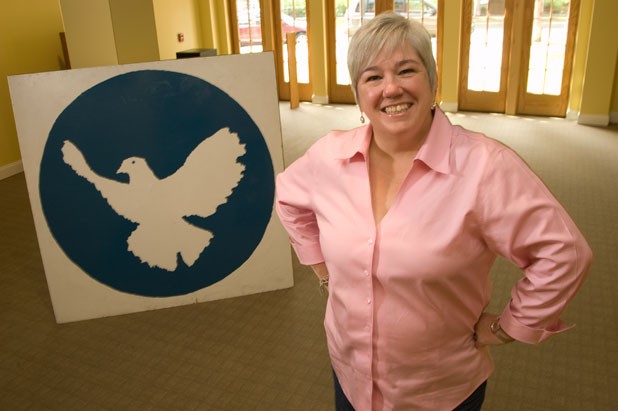 Last weekend, a team of workers and volunteers hauled the entire contents of the Peace & Justice Center — including all the lefty books, Guatemalan hats and peace-promoting tchotchkes — from its long-time home in a Church Street basement to a new location on the Burlington Waterfront. The physical move mirrored the organization’s search for an updated identity.

When Burlington’s Peace & Justice Center was founded 30 years ago, nukes were the hot topic among progressive-minded activists. But, after the Cold War tapered off and the Berlin Wall fell in 1989, the peacenik members of the organization had to evolve and branch out. The growing ensemble soon took up other causes — Hydro-Quebec, racial justice and NAFTA, to name a few. Through educational events, civil disobedience training, war-tax resistance and other activities, the coalition staked its claim as the preeminent peace organization in the region.

Over the years, though, the organization’s multi-issue approach has become increasingly problematic. Many past and present board members agree it’s not necessarily been the best use of the center’s limited resources, and, as the organization enters its third decade, its key players are reflecting on its long-term mission.

“We obviously need to figure ourselves out,” said board chair Hilary Martin. “We need to revitalize the organization just like any nonprofit would at the 30-year mark.”

Wendy Coe founded the organization as the Burlington Peace Coalition in 1979 with Progressive benefactress Robin Lloyd and remains the center’s office manager. “You have to keep evolving,” she said.

The Burlington-based organization has seen its share of tumult. After long-time executive director Ellen Kahler left in 2002, the center went through two directors in rapid succession. Neither former executive director Chris Meehan — now chief of programs and network services at the Vermont FoodBank — nor Serena Chaudry stayed long enough to set the PJC on a clear path for the new century.

The center’s new executive director, Nancy Lynch, aims to change that. In May, the PJC hired the 48-year-old former corporate educational recruiter from Safeline, a domestic and sexual violence advocacy organization in the Northeast Kingdom. She served for three and a half years as executive director before handing the organization over to a local woman with a long history there. “I had brought Safeline as far as I could, because I wasn’t from rural Vermont,” Lynch said with a strong Southie accent.

Lynch, a silver-haired woman who exudes confidence, needs no prompting to talk about her work as an activist. Before heading Safeline, she did advocacy work in Vermont and Washington, D.C., for the March of Dimes and the Marijuana Policy Project, which supports the decriminalization of marijuana. These issues may not form part of the PJC’s mission, but Lynch, a resident of Williamstown, said her politics are “radical,” and she considers herself “a change agent” who believes in the causes at the core of the organization’s work. She views her work through both for-profit and nonprofit lenses, she said.

Lynch had some reservations about taking the position, especially because of the organization’s history as a peace group. “I didn’t know what to expect. I thought they’d be peace activists, maybe aging hippies,” Lynch said. “But what I found was a staff full of people dedicated to a wide range of peace and justice issues.”

Over the past dozen years, the PJC has stood up for workers, immigrants and oppressed people in other countries. It has organized all kinds of antiwar vigils and gone into schools to counter the efforts of military recruiters.

But some of its most visible work has been in the area of economic justice. The center’s job-gap studies, its “basic needs” budget and the Livable Wage Campaign have had a direct effect on the state’s labor policy.

“It’s as specific to Vermont as anything we have to work with,” Republican Sen. Vince Illuzzi said of the PJC’s economic analysis. “We’ve always found it to be a useful resource,” especially for the data it supplies about “those on the lower end of the economic spectrum.”

“It’s not a mandate or anything we’re obligated to follow,” Illuzzi added, “but it’s helpful to have when we set thresholds for social programs and work-related policy.” Despite a “concerted effort by some business lobbyists to kill it,” Illuzzi noted the legislature voted to continue funding the study.

Therein lies the PJC’s future, according to Lynch. Peace depends on the establishment of economic justice, she argues. “We’re working toward creating a new economy that promotes peace,” she said. “We are absolutely not forgetting our roots.”

In particular, Lynch said the PJC plans to revisit and update two portions of the “job-gap” study: one relates to the money Vermonters send out of state for goods and services; the other concerns “the tax credits and incentives that we give to companies outside Vermont to do business here,” Lynch explained. With an increased lobbying effort in Montpelier, the organization aims to urge the legislature to “enact performance measurements from independent sources to see what’s the return on investment.”

Not only will Lynch’s arrival spur change at the PJC, but the organization’s move to a new building will bring its work up from underground, literally. While the former location on upper Church Street was easily accessible, it was far from ideal. Lynch’s former office was reminiscent of a jail cell, complete with bars on the windows. This summer’s excessive rain caused flooding problems, and the office’s one bathroom was frequently out of order, sending the staff next door to the public restroom at Borders. In its new location in Main Street Landing, a LEED-certified green building, PJC staff will have a chance to rub elbows with like-minded neighbors such as Seventh Generation and Vermont Businesses for Social Responsibility.

As the PJC shifts and narrows its focus, board chair Martin said she is anticipating some growing pains. Because the organization has worked for positive change in a number of arenas, not everyone will welcome the necessary streamlining. “The difficult part is letting go of things we feel attached to,” Martin said.

Among the issues to which PJC will give less attention is the military counter-recruitment action. With the shuttering of the American Friends Service Committee here in Vermont, the center lost a key ally in that fight.

Kahler, who is now the executive director of the Vermont Sustainable Jobs Fund, said the PJC is wise to redefine its role. “You really have to find out where your niche is in the movement. You have to be crystal clear about your mission.”