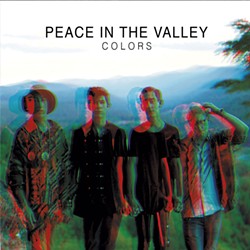 Peace in the Valley are proof that the world has not gone completely insane. Yes, political and social nightmares rain down upon us daily. But at least the kids still want to rock. Eighteen-year-olds Benjamin Burr, Eli Leppla and Enzo Cormier, along with 16-year-old Colin Holter, have embarked on a classic teenage rite of passage: forming a band. And since this is Vermont, it makes sense that they're a jam band. PITV's debut album, C O L O R S, shows us that the spirit of harmony and togetherness is still alive in the next generation.

It's nearly impossible to grow up in Vermont without at least brushing up against jam-band culture. PITV live and breathe it. Their website says they're on "the search for heady jams and higher meaning." That's a grand quest for a group of millennials, given that their cohort seems more concerned with chasing Pokémon than pondering life's big questions.

The band trekked from its home in the Mad River Valley to record at Lane Gibson Recording and Mastering in Charlotte. Its members join the ranks of many noteworthy Vermont musicians who've recorded there, including Grace Potter and Seth Yacovone.

It's easy to hear PITV's musical influences. You could make a bingo card of famous jam bands to play along with the album, and by the end it'll likely be full. Phish? Check. Grateful Dead? Check. Widespread Panic? Bingo. But the obviousness of their sound doesn't reduce their distinct sincerity. And their unabashed love of their influences reinforces the band's ethos.

Despite what the genre usually dictates, C O L O R S mostly doesn't drag on with endless jamming. "Honey Blonde" clocks in at more than nine minutes, its length forgivable only because of its memorable hook. "Ocean Song" is the album's crown jewel. In three-quarter time, the track builds from simple guitar strums to an ecclesiastical climax.

"Portugal. The Woman" is a clear nod to Santana, as opposed to the Alaskan indie-rock band with a similar name. An explicit Portuguese phrase too dirty to print is repeated throughout. If you really need to know what it means, try to get in touch with Burr's Portuguese exchange student, who taught it to them.

Given that three of Peace in the Valley's members just graduated from high school, it's sad to think that they may soon be parting ways, even if they don't yet know it themselves. Wherever they end up, C O L O R S will remain a confident tribute to their collective experience.

Peace in the Valley play on Wednesday, August 17, at the Big Picture Theater and Café in Waitsfield and on Saturday, August 20, at the Warren Store. C O L O R S is available at peaceinthevalley1.bandcamp.com.