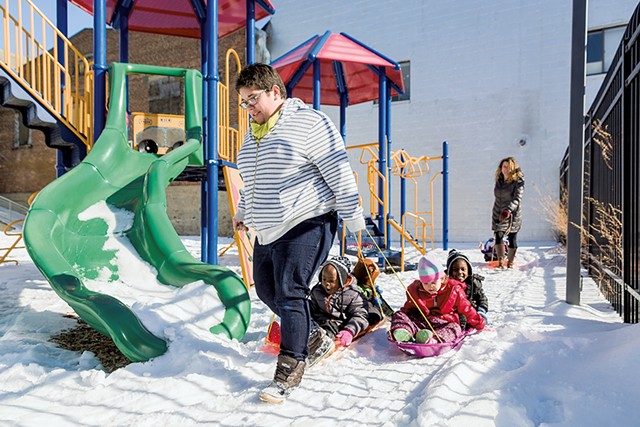 Republican Gov. Phil Scott and top Democratic lawmakers have spent much of the 2018 legislative session characterizing themselves as allies and protectors of Vermont's working families. But none has put forward a plan to address a $9.2 million funding shortfall in the state's childcare system — which some advocates are calling a crisis.

One legislative priority of Senate Democrats — a bill to raise the minimum wage to $15 an hour — might even exacerbate the situation by increasing the cost of childcare and reducing the number of families eligible for state subsidies.

The underlying problem? Vermont hasn't increased payment rates for subsidized childcare since 2010. As a result, low-income families find themselves unable to afford high-quality childcare, and providers struggle to make a living. With no significant funding boost in the works in Montpelier, childcare centers must rely on tuition increases, grants and private donations to keep their doors open.

Not all succeed. The state's most recent data show that 176 childcare centers closed in Vermont during a nine-month period ending in March 2017, while only 90 opened.

"Childcare right now is really balanced on the backs of parents and childcare providers," said Robyn Freedner-Maguire, campaign director of the advocacy group Let's Grow Kids, the advocacy arm of the nonprofit Permanent Fund for Vermont's Children. "The state is not doing enough to invest in our young kids and working families and our professional providers."

Last year, legislative Democrats and the Scott administration increased spending on the subsidy program by $2.5 million but used the money for direct grants to childcare centers that serve mostly low-income families — not to increase per-child rates.

Scott's proposed budget for the next fiscal year would continue providing that level of funding with no additional increase.

The subsidy program is designed to make high-quality childcare affordable along a sliding scale. A family of four with an income of up to $72,900 can receive a partial subsidy; families at or below the federal poverty line — $24,630 for a family of four — qualify for full benefits.

Those benefits, however, aren't working as intended. According to the federal government, which funds half of the state program's $47.3 million budget, Vermont's subsidies are supposed to be large enough that low-income families can afford the market-rate tuition charged by 75 percent of the state's childcare providers.

Instead, the subsidies make only the least expensive care affordable.

"We're at a point where ... on average, our families couldn't access more than 20 percent of providers [without a co-payment]," said Reeva Murphy, deputy commissioner of the state Department for Children and Families, which administers the program.

The low rate means low wages for providers. According to the Vermont Department of Labor, the average childcare worker in the state makes $26,650 per year. That leads to a shortage of workers and, in turn, childcare slots. The severity of that shortage was the central message in a report this month from Let's Grow Kids about Vermont's early childhood education system.

The report, called "Stalled at the Start," found that 51 percent of Vermont children likely to need care "do not have access to any regulated childcare program," an increase of 4 percent since 2016. If parents are trying to find care rated four or five stars by the state-sponsored STARS childcare quality program, the search is even more difficult. Seventy-seven percent of kids likely to need care don't have access to those programs.

Estimates from DCF show that $9.2 million in new funding is needed in order to bring rates up to federal standards. Neither Scott nor legislative leaders have announced any plans to come up with that money this year.

When the state doesn't pay enough, childcare centers have to choose between charging low-income families out of pocket or finding other sources of revenue.

Burlington's nonprofit King Street Center is a case in point. On a Friday afternoon two weeks ago, executive director Vicky Smith walked into a classroom where half a dozen preschoolers were playing quietly with a pair of teachers.

"Oh, non-nappers on a Friday!" she said, approaching a 5-year-old preschooler.

Smith bent down to inspect a Nike shoebox decorated with photos of the girl and her mother and asked about its purpose.

"It makes me calm down so I don't get nervous about my mom so I don't miss her anymore," the little girl explained as her teacher looked on.

"Is it helping?" Smith asked.

Smith stood up as the teacher called the girl away.

"Teachers," she said knowingly, pointing out that an educator with less training might not have found a creative way to relieve the preschooler's anxiety.

The King Street Center has a five-star score, the highest ranking awarded. Smith said that score isn't possible without investing in teachers and facilities.

"This is a really expensive program," she said, noting that the center was renovated in 2015 and employs a full-time chef to feed the kids.

Employing trained, certified teachers isn't cheap, Smith said. Childcare centers trying to improve their star rating face an uphill climb. They have to increase spending on staff and facilities in order to improve rankings, but the low state subsidy leaves many scrambling just to stay open. The subsidy rate is higher for centers with high-quality rankings, but it's still based on 2008 market rates.

The King Street Center charges tuition no higher than the state's subsidy rate, so qualifying families pay nothing for childcare. For a child attending full time, tuition is about $186 per week, Smith said. The cost of delivering that care is much higher.

"We could never ever make it on what the subsidy pays," she said. "Not for an hour."

To make up the difference, the nonprofit relies on other government grants and private philanthropy. If the state wanted to pay the actual cost of providing care at a five-star quality level, Smith said, those weekly payments would have to be closer to $250 per enrollee.

Otter Creek Child Center in Middlebury is in a similar position.

"The state rate of subsidy for most centers comes in lower than what the tuition rate is," said Linda January, the center's executive director. "So for us, the weekly gap for infant care — for kids under 2 — is $56 a week."

When multiplied by the number of children who attend Otter Creek with a subsidy, the financial gap adds up to $17,000 a year, January said.

Like the King Street Center, Otter Creek uses grant money and private donations to cover the financial shortfall. Other providers have closed, unable to make it work.

As a result, high-quality childcare is increasingly expensive and hard to find.

Jennifer Galusha, a single mom in Wallingford, earns too much money to qualify for the full state subsidy. Instead she gets 10 percent of that rate: $16 a week. That means Galusha spends $197 each week for childcare at Home Away From Home, a three-star provider in Manchester Center.

"I'm totaling out over $9,000 a year of my income for childcare," said Galusha, who volunteers for Let's Grow Kids. "About 40 percent of my income goes toward my son's childcare."

While lawmakers do not have a plan to increase childcare subsidies this year, Senate Democrats passed legislation last week to raise Vermont's minimum wage to $15 an hour over the course of six years. They argue that doing so would help working families. But the bill would also push some Vermonters over the so-called "benefits cliff," meaning the additional income would render them ineligible for a variety of income-sensitive social programs.

"The real killer in that group [of programs] was the childcare benefit, in terms of the loss people may suffer if they saw their wages go up," acknowledged Sen. Michael Sirotkin (D-Chittenden), the lead sponsor of the minimum wage bill.

A report from the legislature's Joint Fiscal Office shows that a single parent working a full-time, minimum-wage job stands to gain $633 in income in the first year of wage increases but lose $765 in benefits, including $469 in childcare subsidies.

Sirotkin said his bill addresses the issue by requiring the state to continue providing childcare benefits to families earning the minimum wage, even as their incomes rise. However, the legislation doesn't specify a source of funding for the expanded eligibility. Sen. Richard Westman (R-Lamoille), who sits on the Senate Appropriations Committee, said he's not confident the state will find the money to pay for that increase.

Business leaders say the cost and availability of childcare has become an obstacle to workforce development. In an op-ed earlier this month, Lake Champlain Regional Chamber of Commerce President Tom Torti called for more investment in early childhood care.

"Even when parents are able to juggle family and work, productivity and focus can suffer due to the stress of paying for childcare or worrying about their children during work because they were unable to find an ideal childcare situation," Torti wrote.

In an interview, he said the chamber's members tell him regularly that lack of childcare, or lack of affordable childcare, is becoming a staff recruitment and retention issue.

"It comes up over and over and over again," Torti said. "The fact that people, as soon as they know they are pregnant, have to go out and start looking for daycare, and sometimes pay months [in advance] ... to have a daycare spot, is just crazy. I could use more colorful words, but, really, it is not a good system."

Galusha, the Wallingford mom, said the state isn't going to escape its economic problems by continuing to underinvest in young children. When asked about the governor's emphasis on making Vermont more affordable, she didn't mince words.

"[Scott] needs to start with the children," she said. "I mean, you can't have Vermonters staying in Vermont if they can't afford to have a family."