According to three of the four children for whom Laughing Child Farm in Pawlet is named, the best part of growing up on a sweet potato farm is driving tractors. The abundance of sweet potatoes on their daily menu, the siblings agreed, is less appealing.

In the household of farm owners Tim and Brooke Hughes-Muse, sweet potatoes are a year-round ingredient. The orange-fleshed tuberous roots infiltrate every recipe: puréed in pancakes and waffles, grated in muffins, diced in shepherd's pie, subbed for chips in nachos, and even blended into smoothies and lattes.

Sitting at the dining table in the family's 1848 farmhouse, Magnolia, 10, nodded vigorously when asked if she'd had enough of sweet potatoes. "I'm sick of them," she said.

"I do get a little tired of eating them," allowed Rowan, 16. "When you bite into a muffin and it doesn't have sweet potato in it, you're like, 'Oh, yeah!'"

This particular downside of specializing in one crop did not occur to the Hughes-Muses, both 41, when they decided about a decade ago to farm exclusively sweet potatoes. Their niche approach flies in the face of conventional wisdom, which suggests that Vermont vegetable farmers manage risk through diversity.

This year, the yield was excellent. From the beginning of September through mid-October, Laughing Child Farm's team hand-dug close to 600,000 pounds of certified organic sweet potatoes from 30 acres in cultivation.

The 2021 harvest of 370,000 pounds grossed $500,000, and the farm's revenue has supported the family for the past five or six years, the couple said. They are proud to pay a livable wage. Harvesters made around $20 per hour this year; locals received mileage reimbursement and the others, free campground accommodations.

Laughing Child generally sells through nearly half of its inventory by the end of the year, the couple said, reflecting peak demand for the winter holiday staple. The farm will continue to supply sweet potatoes through at least May to stores across the state and another dozen or so in New Hampshire, Massachusetts and New York.

The Pawlet farm produces in such volume that it has enabled the co-op "to phase out non-local organic sweet potatoes in the winter," Kane continued. "That's something that would have seemed inconceivable in years past."

On October 13, the day after harvest wrapped up on the farm, a few crew members ran sweet potatoes through the washing equipment, while another pair finished cleaning a muddy tractor beside the red, slate-roofed barn.

Tim rolled up the door of one of three huge curing rooms, releasing a waft of hot, earthy air. Freshly harvested sweet potatoes spend a week to 10 days held at 90 degrees with 95 percent humidity. They then make the transition to 60-degree storage with the same humidity until they are washed and shipped to order.

Dressed in a cowboy hat and boots, plaid shirt, and belted jeans, with a bandanna around his neck, Tim looked more like a cattle rancher out west than a Vermont vegetable farmer.

"He is the fanciest farmer in town," joked Sita Watanabe, 24, a Manchester resident who had worked the final three days of harvest. 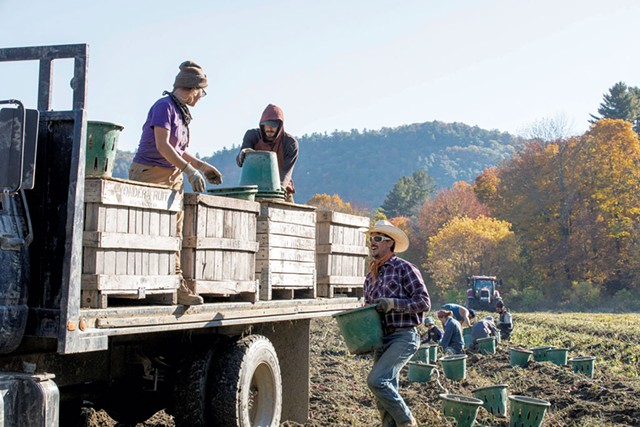 Tim did grow up on a cattle farm in Maryland and launched his first agricultural enterprise — raising chrysanthemums — when he was 12, though he had no plans to farm for a living. He earned a degree in environmental studies at the now-defunct Green Mountain College in Poultney, where he met Brooke, who had come from Missouri to study environmental business.

The two married in 2002, when Brooke was a junior and Tim was about to graduate. That summer, he started a two-year stint managing the college farm. By 2007, the couple were living year-round in a pair of yurts with their first two children, juggling jobs to pay down a combined $100,000 of educational loans.

"I remember wearing hats and gloves at the dinner table," Rowan said with a shiver.

The farm's name dates back to those days, the couple explained. The yurt's walls let in not only the cold but also sound from outside. One day, Tim and Brooke were doing some business planning for their fledgling farming enterprise. Willow, their eldest, and Rowan were outside collecting eggs, "just giggling their heads off," Tim said.

The sweet potato idea arrived a few years later, after Tim reluctantly concluded that diversified agriculture was not a sustainable way to make a living or to build a business that could pay its employees a fair wage.

By then, the family was living within the more sturdy walls of their current home as part of Tim's compensation for working for the then-property owner. The Hughes-Muses would eventually buy the house and 39 acres in 2014 for $217,000 with the help of the Vermont Land Trust, but that seemed like an impossible dream at the time.

"We didn't have a penny to our name or any equipment," Tim said. "I was trying to quit farming, but Brooke said, 'I like this place, and I want to be married to a farmer.'"

"I did say I wanted to live here," Brooke clarified with good humor. "I said, 'Let's figure out how to make this work.'"

Tim had grown sweet potatoes in the Hudson Valley, and he thought they could do well in the Mettawee River Valley's relatively warm microclimate and soils.

On a practical level, he said, vegetables pay back their up-front investment more quickly than most livestock do, and focusing on one crop streamlines equipment needs.

Another attraction of sweet potato cultivation was its schedule, which would allow Tim to work a full-time job off the farm for the first few years. The growing and selling seasons for sweet potatoes do not overlap, and the crop stores well, so the workload and cash flow are spread out over the year. Since sweet potatoes require little attention in the month before harvest, August would even allow for a family vacation.

The couple also saw a market opportunity. Several Vermont farms were growing sweet potatoes in their mix, but they produced barely enough to meet the November and December demand. The Hughes-Muses cold-called buyers and said, "When you run out, call us," Tim recalled.

The couple were aware of the risks of putting all of their sweet potatoes, so to speak, in one basket. But once he'd run the pros and cons, Brooke said, "You can't tell Tim anything."

"I do joke that I want to be the best at something no one else is in," Tim said.

The couple had helping hands from neighbors, who lent them equipment and even land to get started before they bought the farm. In 2013, their second year, they had a complete crop failure. "We got 24 inches of rain in three weeks just after planting," Tim recalled with a pained look.

Since then, harvests have been good to excellent.

When Philip Ackerman-Leist was a Green Mountain College professor, he worked closely with Tim on the college farm. Now a regional food and agriculture systems consultant, he's remained close friends with the Hughes-Muses, who are neighbors with him and his family.

In the classroom, Ackerman-Leist generally counseled that diversification was the best option for vegetable farms. Laughing Child's success helped change what he taught, he said in a phone interview.

The Hughes-Muses have built unparalleled skills in sweet potato cultivation and marketing, Ackerman-Leist said: "They're top tier and recognized as the expert in Vermont and around the [state's] edges."

Ackerman-Leist said he has always been impressed by the couple's energy, focus, and commitment to balancing farming and family. He recalled how frugally they lived for many years out of college.

"They had a heavy debt load, but they had those loans paid off in a time frame no one does," he said. "They have a lot of discipline and a willingness to work hard."

The farm's season starts with staff driving down to North Carolina to pick up thousands of sweet potato slips, or starts. Laughing Child currently grows three varieties: Beauregard, Covington and Bayou Belle, the last of which has purple skin and is a favorite of City Market's Kane.

Tim runs the farming operation while Brooke handles paperwork, sales and bagging. She also teaches yoga and is a massage therapist. "Brooke works full time for the farm, and then she works again," her husband said.

The laughing children pitch in, too. Rowan has become the family baker of sweet potato pies for the Laughing Child farmstand since her older sister left for college.

A few years ago, in response to customer demand, the farm started offering peeled, diced sweet potatoes. Twice a week for a couple of hours after school, the kids join the assembly line. They are paid $15 to $17 per hour, most of which goes into their college savings funds, their dad said.

While the younger generation of Hughes-Muses may not relish eating sweet potatoes at every meal, they seem pleased to contribute to the family business and build their confidence and skills.

"Today was the first time I disced a field," Danny said, proudly describing the process of lowering a disc harrow into the soil and navigating the tractor down each row. "I only messed up once."