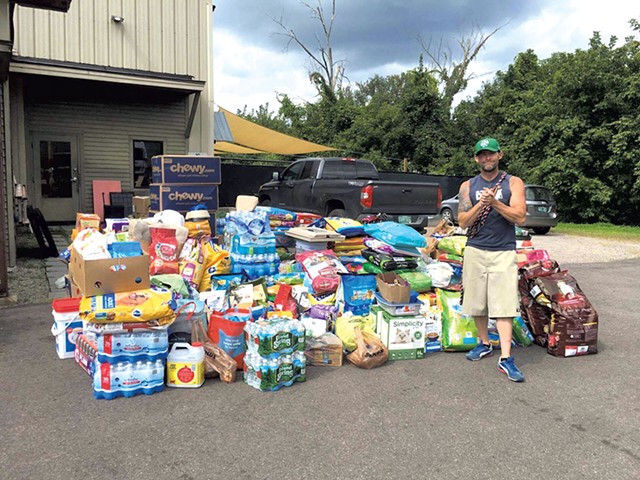 About a dozen Vermont do-gooders are down in Houston helping displaced dogs.

The crew from All Breed Rescue in Williston and Oh my DOG kennel in South Burlington teamed up to take more than 20,000 pounds of food and supplies to the storm-ravaged Texas city. The group, spearheaded by Oh my DOG owner Whitney Troy-Vowell, also raised about $9,500 for fuel, expenses and supplies, with leftover cash to be donated to various rescue organizations.

According to Scarlett Clark, front desk supervisor and board member of All Breed, the determined Vermont bunch — driving two 26-foot trucks and two cargo vans loaded with dog beds, toys, treats and food — departed last Friday, September 1, and spent 35-plus hours on the road. The caravan encountered other Good Samaritans with "Houston-bound!" signs on their windows and vehicles loaded with supplies.

For Clark, it was a homecoming: She grew up in Houston, and her father still lives there. He stayed with a friend during the storm, Clark said, and his house escaped serious damage — though he needed a boat to get to it.

In Texas, the group has hit bumps in the road. One of the trucks blew a tire on Monday and briefly caught fire, Clark said, and they've waited in long lines to get gas. They've hit some patches of high water but have stayed away from the most devastated areas, where recovery efforts continue.

Once the Vermonters empty their vehicles, they'll pack up 25 homeless pups to bring back north, likely by the end of the week.

Despite all the damage, Clark has witnessed an outpouring of support. "It's been really nice," she said. "To just get everyone helping right now — it's heartbreaking, but everyone's been so amazing."