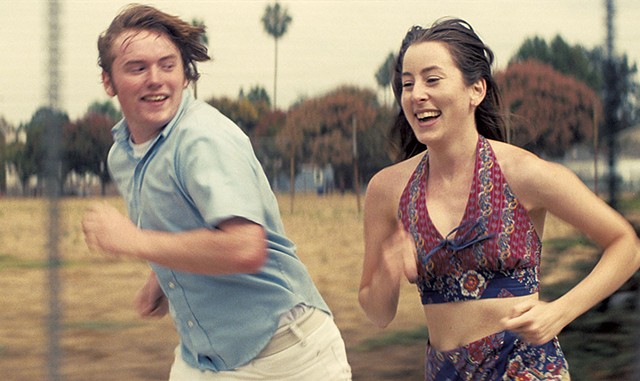 The poster hits you like a pure shot of the past — a goofy, American Graffiti-esque illustration of a giant woman holding a smitten-looking guy in the palm of her hand. One look at it, and you can almost hear the thump of an eight-track player from a Nixon-era sedan.

I took a break from a miserable January to spend 133 minutes in sunny 1973 Los Angeles with the latest from Paul Thomas Anderson, who already demonstrated his talent for chronicling the inner lives of Angelenos with Magnolia, Boogie Nights and Inherent Vice. One of 2021's most acclaimed films, Licorice Pizza is currently playing at the Savoy Theater in Montpelier and Merrill's Roxy Cinemas in Burlington.

Fifteen-year-old Gary Valentine (Cooper Hoffman) fancies himself a smooth operator. A child actor who's outgrown "cute" roles, he's eager to start the next phase of his life.

When Gary spots Alana Kane (pop singer Alana Haim), who's assisting with his high school's yearbook photo shoot, he asks her out. She objects that she's 10 years his senior. But Gary, a natural salesman who helps his mom with her PR jobs, doesn't like taking no for an answer.

Soon the two are hanging out — as friends. Aimless and still living at home, Alana assists Gary in very '70s business ventures such as selling waterbeds to the swinging singles of the San Fernando Valley. As they weather the oil crisis, run-ins with Hollywood eccentrics and Alana's fitful efforts to act her age, they become a pretty good team.

When it was released last month, Licorice Pizza touched off a social media controversy based on its supposed glorification of a romance between an adult and a teen. For what it's worth, the movie doesn't play that way, except in fleeting moments that are more homages to classic Hollywood romantic storytelling than examples of it. It's actually a comedy of awkwardness akin to Fast Times at Ridgemont High (1982), from a more naturalistic era when teens on screen sported sweat and acne and genuinely dorky banter.

Licorice Pizza is also a shaggy-dog story — ungainly, leisurely, anecdotal. For a while, you may think it's going nowhere. Gary and Alana have off-putting qualities that initially keep us at a distance from them: While he's always hustling, she flies into rages at the slightest provocation. As large and loud as caricatures in a classic Mad magazine, neither is the soulful protagonist we expect from a long tradition of coming-of-age dramas.

Yet they grow on us. For this viewer, the shift came around the midpoint, when the narrative perspective switches from Gary to Alana, and we begin to grasp why she's stuck in a state of arrested development. In 1973, most Americans still equated being a grown-up woman with marriage. With new options opening up, Alana doesn't know what she wants — to please her parents? To be sexy and desired? To make a difference in the world?

Her friendship with Gary crackles with a tension that feels less like romantic chemistry than sibling rivalry. When he starts hanging out with a girl his own age, she one-ups him by going out with a middle-aged movie star (Sean Penn). But the star is less interested in Alana than in rehashing his glory days with a crusty director (Tom Waits). And the hotshot young producer (Bradley Cooper) who flirts with Alana does it only to show that he can.

Everybody swaggers in Anderson's LA; everybody's projecting a larger-than-life self and doing their best to protect the fragile ego inside. Meanwhile, the painstakingly retro cinematography shows them as they are, warts and eye bags and all.

Anderson and his codirector of photography, Michael Bauman, shot on 35mm film, often using antique lenses. They make exhilarating use of tracking shots; one of a long line at a gas station establishes the historical moment better than any montage could do.

There are period settings so detailed you feel you could step right into them, such as the Tail o' the Cock, the Valley haunt where Gary brings all of his would-be girlfriends. There are also evocations of the era that feel like missteps — most obviously, a repeated gag involving a racist restaurateur.

Licorice Pizza is a little like Gary; it tries so hard to win you over that at first you may resist. Scene by scene, though, I found myself slipping into its groove. While it lacks the dramatic rise-and-fall arc of a Boogie Nights, Licorice Pizza might be a perfect hangout movie. It's just too bad that theaters aren't the safest places to hang out these days.

Boogie Nights (1997; Showtime, Tubi, rentable): Hoffman's dad, Philip Seymour Hoffman, had a breakout role in Anderson's sprawling drama about the 1970s heyday of the porn-flick industry. For another of Anderson's LA stories, see