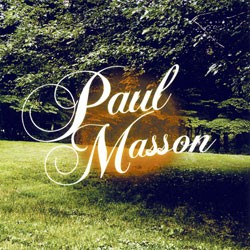 As American cities go, Baltimore is something of an enigma. Nestled smack in the middle of the Eastern seaboard, it’s not really northern. But it’s not really southern, either. Veer too far off the friendly cobblestoned streets of Fell’s Point and you could wind up in the sketchiest of ghettos. The average tilt at Camden Yards often feels more like a road game for the perennially lowly Orioles, with as many out-of-town rooters as hometown fans. On the surface, it seems the entire city is in the midst of an epic identity crisis. But that’s not really the case. Dig a little deeper and you discover a city with a bounty of singular riches to offer anyone willing to look for them.

Witness B-more native son Paul Masson. At first glance, he’d strike you as just another sensitive dude with a guitar, crooning twangy heartfelt ballads. And he is. But spend a little time with his self-titled debut EP peeling away the cross-stitched plaid layers and you’ll find something else altogether. Much like his hometown, Paul Masson is deceptively complicated.

The five-song EP leads off with “Gonna Be Your Man.” Backed only by a sleepily descending acoustic guitar progression, Masson uncorks a tender, heartsick ballad. His candy-coated voice is immediately impressive, to the point that it hardly matters what he’s singing. It is easy to lose yourself in his shifting, opaque tones.

That mesmerizing hypnotism is only strengthened by the following track, “Where Have All the Gentlemen Gone.” Lucid pedal steel lends the tune a dreamlike melancholia, complementing Masson’s yearning observations to perfection.

“My Girl, Baltimore” is a loving ode to Masson’s hometown. A cynic might view the tune as little more than a rehash of Ryan Adams’ “Oh My Sweet Carolina.” And while it’s true both songs lay bare a similarly fractured homesickness, Masson imbues his with a heartache that is pure and genuine.

“Red Morning Sky” closes out the debut. Sort of. Predictable in both melody and writing, it is the EP’s weakest cut. However, if you can make it through, Masson has included an untitled secret track, right around the 7-minute mark. It’s a stirring little acoustic-voice tune that bookends the disc so well, you’ll wonder why he hid it. Then again, maybe that’s just Baltimore; you gotta look to find it.