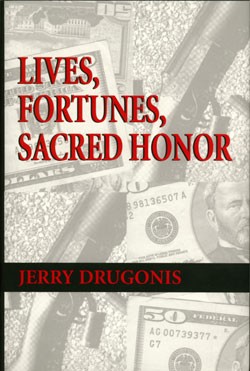 It sure is hard living in America today, what with The New York Times, the American Civil Liberties Union and the Endangered Species Act wreaking havoc on old-fashioned American values. Sometimes our contemporary moment is enough to drive a man to assassinate a few liberal judges and career politicians with a slingshot that emits rattlesnake venom through a pair of fang-like needles.

And so it is with Zack “Deuces” Wilder, protagonist of Lives, Fortunes, Sacred Honor, a first novel by Jerry Drugonis. Like his creator, Deuces is a former Marine and state trooper, a hardboiled patriot who takes his cues from Thomas Jefferson, not some “extremely liberal senator from Illinois.”

That’s not to say Wilder has something against people who are “liberal, socialist or anything else.” He’s happy to mind his business, provided liberals, socialists and anything elsers do the same. But they don’t, and that sets Deuces off on his crusade against a menacing ensemble of decidedly un-Jeffersonian bureaucrats and other good-for-nothings.

Drugonis, 72, describes Lives, Fortunes, Sacred Honor as “kind of a memoir” of his service as a Marine gunner during the Korean War and commanding officer of a forensics laboratory for the Connecticut State Police. But, the author admits, the book has a few “personal philosophies sprinkled in,” too.

On a recent afternoon at his woodsy Pittsfield, Vermont home, Drugonis certainly has a lot to say about American ideals, or what’s left of them. An avid hunter and fisherman, he traces his libertarianism back to the late 1950s, when he wrote to a Connecticut senator expressing concerns about a bill that attempted to regulate gun ownership. The senator replied dismissively, Drugonis recalls. Ever since, he’s been increasingly worried that the US of A is going to seed.

“I devoted my entire life to serving the country,” explains Drugonis, a portly fellow who still wears state police T-shirts, sitting on his living-room couch. “And I get upset when I see people doing something to disrupt it.”

Drugonis first came to Vermont on a hunting trip in 1960. He purchased his Pittsfield home in 1989, the same year he retired from the police force. He and his wife of 48 years, Arline, moved here for good from Connecticut six years ago.

Drugonis has dabbled in writing ever since high school; he contributed to a manual on forensic science during his days on the force, and in 2000, he won a writing contest sponsored by Parade Magazine. But he had never tried his hand at fiction until 2003, when he started writing Lives, Fortunes, Sacred Honor at the request of his three children.

He had plenty of material. In addition to anecdotes drawn from his stints as a Marine “grunt” and a Connecticut cop, Drugonis filled a shelf with CDs storing crime data and newspaper articles. (The discs now live on a basement rack, just above titles by Jefferson, Tom Clancy, W.E.B. Griffith and Norman Schwarzkopf. “I’m kind of dangerous when it comes to reading,” the writer cautions with a chuckle.)

When Drugonis finished his manuscript five years later, he fired it off to Vantage Press, a self-described “subsidy publisher” in New York that he discovered while reading American Legion Magazine. (Vantage prints books for a fee and returns 40 percent of sale proceeds to authors.) The book is a violent tour de force that, glaring typos notwithstanding, could satisfy the fantasies of an Internet-based Charlton Heston fan club.

Drugonis’ opus opens on a “chilling note,” in a Connecticut restaurant where Deuces is telling a special-agent friend that the feds no longer honor the Second Amendment-guaranteed right to bear arms. “Dammit, Deuces!” the agent counters. “You know as well as I do that there are just too many guns around. We’re not fighting the Indian Wars any more [sic]!”

Wilder begs to differ. The government is trying to “completely disarm the populace,” he opines; that’s why he isn’t planning to give up his guns without a fight. Indeed, Wilder warns with Hestonian bravado, “You won’t get them if I’m breathing!”

A few pages later, Deuces comes home to find his wife and child savagely slain. His son was unable to defend Mom from the assailant, we learn, because Dad had foolishly locked up all the household firearms in deference to a media-induced obsession with “safety.” Worse, though the “bastard” who committed the crime is convicted, he goes on to enjoy a cushy life in prison complete with a “well-appointed gym,” “access to a large-screen color TV” and meals cooked in accordance with his “professed Muslim faith.”

Deuces is pissed, and in the remaining 427 pages, he directs his rage against government officials he holds indirectly responsible for the grisly act. He starts small, knocking off two officials — via hanging and planted explosives — from the Bureau of Alcohol, Tobacco and Firearms. Later, Deuces helps establish the “Sons & Daughters of Liberty,” a vigilante group that carries out more high-profile assassinations with such diverse weapons as guns, piano wire and rattlesnake venom. Through its subversive online zine, Midwife of Freedom, Sons & Daughters advocates for a constitutional convention that would restore long-lost Jeffersonian liberties.

Alas, the convention never happens, but Deuces manages to anger environmentalists, animal-rights advocates, a New York Times reporter and “the Senator who would have been the nation’s first woman president” with his antics. Wilder also makes bank on an international gambling operation he runs out of Rutland. Both his proto-terrorist and extra-legal financial exploits are enhanced by gallons of top-shelf liquor. The booze, in turn, leads to gladiatorial sex with his new wife, Helen, with whom Deuces fathers twins against the advice of pro-abortion doctors.

Drugonis says he is pleased at how his novel turned out. “I’ve got pretty strong feelings, and I expressed them pretty well in that, don’t you think?” he asks his real-life wife, who’s reading in a nearby chair, and who didn’t read Lives until after it had been printed.

“In the book?” Arline asks. Beyond their living-room window, two blue jays alight on a birdfeeder that stands in the center of a well-manicured garden.

“Yeah. The strength of my feelings.”

Arline is an “individualist,” Drugonis claims, noting that she doesn’t spell her name the conventional way. Similarly, her husband’s fiction doesn’t pander to political correctness. Women are repeatedly called “females,” for example, and the omniscient narrator employs the term “oriental” without a trace of irony. That’s partly the point, Drugonis says. “It raises eyebrows around here because we do have a lot of liberal people,” he explains. “And that’s OK, because if I can get them to think, to try to argue that I’m wrong, I guess I’ve accomplished my purpose.”

At least one reader besides his wife likes his novel. Neighbor Doug Johnstone, a builder who did some carpentry work on the Drugonis homestead, took Lives, Fortunes, Sacred Honor for a spin. He says it reminds him of work by popular Vermont author Archer Mayor, a crime novelist who moonlights as a death investigator for Vermont’s chief medical examiner.

Drugonis’ novel is “way over the top,” Johnstone concedes, but his “thinly veiled” political sensibility is “gratifying in a fantasy sense.” Johnstone, who has a degree in English literature, doesn’t see eye to eye with Drugonis on gun control — “I usually root for the animals,” he says — but he appreciates the way Drugonis fictionalizes tales from the Connecticut street beat.

“I mean, I don’t know Jerry real well on a personal level,” Johnstone adds. “But he’s explained some of his experiences, and I could see it in his characters and stuff, so that was interesting.

“For a first-time effort,” Johnstone concludes, “I thought it was pretty good.”

If all goes well, Lives might be the first of many Drugonis titles. Despite an Amazon.com sales rank of 1,877,006 at press time, the novel is selling well down south, he reports, and he is already at work on a sequel, A Little Revolution. (The title comes from a Jefferson quote.) Most mornings, Drugonis writes in his basement study, which is adorned with Marine paraphernalia, mounted antlers and American flags that recently flew over Iraq.

When he’s not writing, Drugonis cooks, hunts, fishes and visits family in Connecticut and North Carolina. Pittsfield isn’t as populous as the Connecticut town he came from, which explains why he takes target practice in the woods beyond his bird feeder, rather than at a licensed shooting range.

Drugonis’ pistol and revolver, of course, are safely locked up in a classified location. But some of his rifles sit on a gun rack in the foyer, and a glass cabinet in a second-floor bedroom displays a .22-caliber (for “plinking” tin cans), a .30-.30 (for deer), a .338 Magnum (for big game), and a Korean War semi-automatic M-1 Garand that Drugonis is currently restoring to its former glory.

“We have a perpetual problem here with bears,” the newbie author says, holding up a rubber bullet between his thick fingertips. “I’ve educated the bears to stay out of the yard.”

“Deuces, honey? You’ve been planning this operation of yours for a long time, haven’t you? You’ve got enough hardware here to fight a small war! That vault of yours staggers my imagination!”

“It wasn’t a case of planning, sweetheart. Any jackass with a lick of sense should have seen what was coming. I just tried to get ready for it, that’s all. Those that failed to do so are going to find themselves disarmed. I certainly never thought I’d be taking on a corrupt government, for God’s sake! I’m not a revolutionary!”

The anguish Helen was suffering was apparent in her voice when she expressed her concern. “Deuces, honey, are you planning on taking out the President?”

Deuce’s astonishment was obvious and sincere. “The President? Where in hell did you come up with that? I don’t care if the occupant of the Oval Office is the biggest jackass in the entire world — there’s no way I’d go after him! However he did it, he was elected! I’m not interested in taking over the country. I just want officials to do what they were elected to do. Come on, Helen, I’m not an anarchist!”