Patrick Fitzsimmons, So Beautiful So Blue 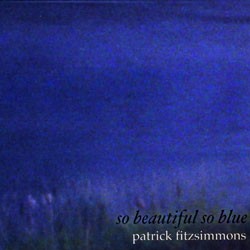 You can take the man out of the ’90s, but you can’t take the ’90s out of the man. With his fifth full-length solo release, So Beautiful So Blue, Bristol-based songwriter Patrick Fitzsimmons continues to till the familiar but fertile folk-rock soil he trod as the drummer for 1990s alt-folk outfit From Good Homes. In their heyday, the band achieved modest success not unlike that of similarly commercially underappreciated but critically aclaimed Del Amitri and Emmett Swimming. But those were heady and competitive times for sensitive-guy rock. The band called it quits in 1999 without reaching the pinnacle of flannel-clad sad-sack stardom.

But Fitzsimmons presses on, unabashedly embracing much of the aesthetic that made that era of music so appealing — at least to depressed white guys: bouncy pop melodies balanced with melancholic, heart-on-sleeve lyricism and just a touch of melodramatic, sentimental earnestness.

Fitzsimmons is an immensely talented singer. With a shimmering, silken delivery, he is effortlessly emotive. From the opening track, “Gone Like a River,” and in numerous instances throughout the album, it’s hard not to draw comparisons to Counting Crows front man Adam Duritz, a poster child for ’90s melancholia. On this tune in particular, the similarity is striking; the song could reasonably pass as an outtake from Recovering the Satellites. If you were an aforementioned sad white guy back then, you know that’s not a bad thing.

For a time, From Good Homes enjoyed major-label bliss on RCA Records. It appears Fitzsimmons has not forgotten those days, as So Beautiful is exquisitely and professionally produced and arranged. While the album’s glossy sheen is largely an attribute, there is a fine line between wistful and cheesy. And the quickest way to blur that line is by overproducing, as has been done to “So Far.” The song’s saxophone interludes tread a little too close to ponytailed Kenny G schmaltz for comfort.

Maudlin moments notwithstanding, So Beautiful So Blue reveals a mature songwriter near the peak of his abilities. Fitzsimmons may not possess the jagged edge of the current crop of overwrought indie singer-songwriters, but that’s OK. Wide eyed and heartfelt, his music ably and honestly recalls a simpler period of American pop music. It is retro in the finest, and blissfully unironic, sense of the word.