Tucked behind a parking lot within shouting distance of Windsor's Harpoon Brewery is a gate to a spiritual journey. The Path of Life Garden, nestled on 14 acres between the Connecticut River and an industrial park, is a sculptural garden that aims to symbolize the journey of the human soul. The path has 18 outdoor "rooms," each representing a stage of existence, from birth to death and even rebirth.

Like life itself, the garden path begins without a clear view of what is ahead. Visitors enter through a metal underpass, called the Tunnel of Oblivion, which brings them to a simple post-and-beam gate, then to the first room, Birth. A few paces beyond that vulva-inspired stone sculpture is a hemlock maze, Adventure, that obscures the rest of the garden from view. A signpost offers visitors a choice: "Less" for an easy journey around the maze's perimeter, or "More" to enter the maze, which contains many dead ends and a bell to ring at its center.

"It makes life more observable, accessible, understandable — because it is just so complex." Terry McDonnell tweet this

"It's a trip," Path of Life Garden founder Terry McDonnell said with a laugh. He designed the Adventure maze as a representation of adolescence and "sort of being lost." A former child therapist and "serial entrepreneur," he owns the land on which the sculpture garden and industrial park sit. 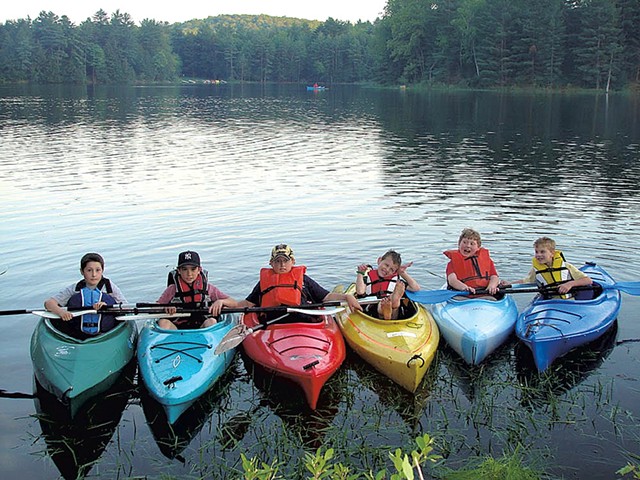 He also co-owns next-door Great River Outfitters, which leads day and overnight trips on the Connecticut River in kayaks, canoes, tubes and paddleboards. The business offers fat-tire bike rentals and campsites on the garden grounds, as well.

McDonnell began constructing the garden in the late 1990s, inspired by the Japanese Gardens of Tully, Ireland, which were built between 1906 and 1910 to symbolize "the Life of Man." Together with friends, family, and local artists and contractors, McDonnell added more rooms and structures to the garden over the years; it opened to the public in 2004. 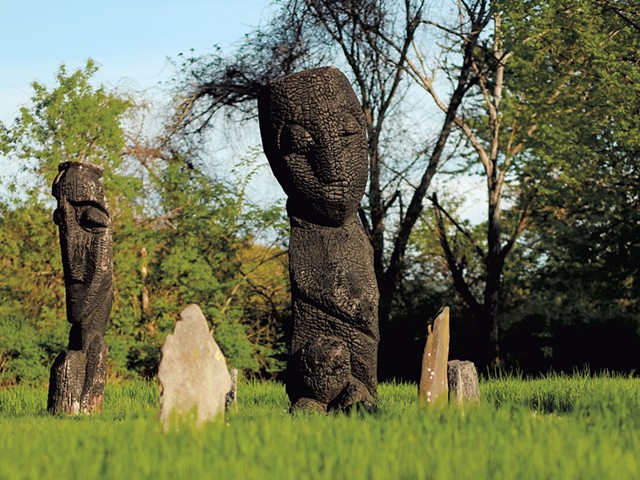 Creating, maintaining and sharing the Path of Life Garden, he said, has brought him a much greater sense of peace. McDonnell estimates that about 8,000 people visit the garden yearly, a fraction of the 150,000 who come to the industrial park, where Harpoon Brewery is the biggest draw.

Playfulness is an important theme in the garden. Early along the path is the Creativity installation, made of towering driftwood sculptures in the shape of musicians. McDonnell built it with artists from Marin County, Calif.; it's easy to imagine the pieces at a Burning Man festival of yesteryear.

In front of the musicians are a firepit and picnic tables that campers can use. The river bends behind it; on its banks is a starburst-shaped sculpture by Windsor artist Herb Ferris, designed for people to lie back on and gaze at the sky or stars.

Sharon-based artist Ria Blaas made the Easter Island-esque heads for Community in 2008. Standing among the charred wooden heads, one has a wondrous view of the Adventure maze, its turns clearly illuminated. The visual metaphor: Turns in life are not detours from the path; they are the path.

The garden is full of hills and ridges, some of which appear too steep to be accessible to visitors with limited mobility. The top of Ambition, portrayed by a grassy, earthen mound, offers a lonely, expansive view of the garden's acreage. There, one looks down on Community, the recently passed Family and Union rooms seem distant, and Creativity is obscured by trees. The trickling waterfalls of Respite, which lie ahead, cannot be heard, and Contemplation, depicted by a statue of the Buddha and a labyrinth, looks appealing but out of reach.

A spirituality study released last fall by the Fetzer Institute found that 86 percent of Americans consider themselves spiritual, while 61 percent aspire to be more spiritual. McDonnell, 60, said he was raised Catholic and "found" yoga, Buddhism and meditation in his thirties and forties. Some 20 years ago, he went to India, listened to the guru Ramesh Balsekar and was moved by his perspectives, especially the belief that humans have no free will.

Nowadays, McDonnell said, he has "very, very loose boundaries when it comes to spirituality. As long as it's about acceptance and forgiveness, I'm good with it. I bet all religions have that."

He continued, "My experience of others who have been suffering is, we need more forgiveness and acceptance."

Forgiveness, a bamboo sculpture that requires a full head tilt to see to the top, is one of the later stops on the garden's path — just after Sorrow, depicted by a tepee frame without a cover. Nearby both is Joy, symbolized by a raspberry patch and blueberry bushes for visitors to pick and share in season. 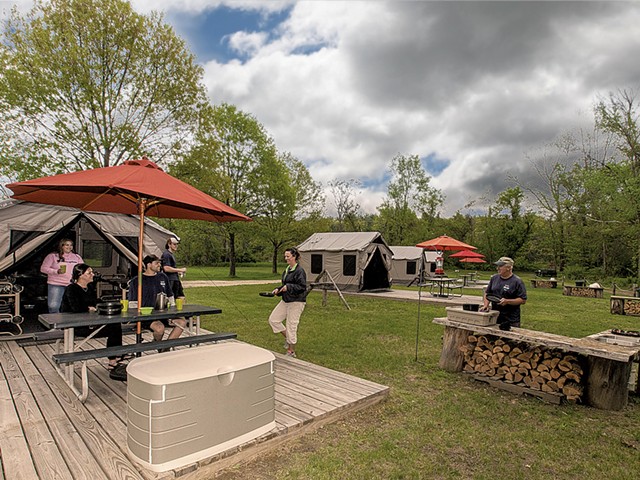 McDonnell said he thinks people who have suffered recent loss often discover the greatest meaning in the garden — but that it's a place spirituality seekers of all stripes can find relatable.

"It's a very simple physical representation of a super-complex, abstract experience, which is life," he said. "Or I think it's something like that. It makes life more observable, accessible, understandable — because it is just so complex."

McDonnell admitted that some people could find universalizing narratives of life too narrow, but he wasn't worried about it. "As much or as little as they take away is good with me — however they experience it," he said. He did acknowledge hearing criticism about his display of the Buddha statue, which is placed on the ground and covered in coins and trinkets from visitors. (To show reverence, statues of the Buddha in Buddhist cultures typically rest on an altar or are elevated off the ground, with offerings placed on an altar.) 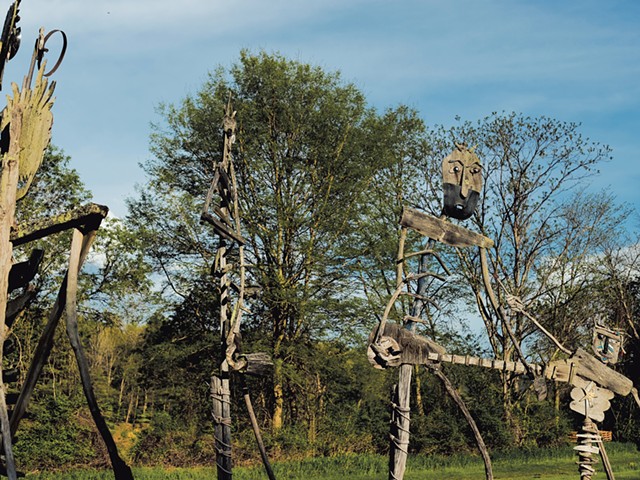 Nicki Carmody, the shop director at Great River Outfitters, said that many of her customers have no idea the garden exists when they book a camping or river trip but are affected by the experience when they encounter it. A 20-foot-tall driftwood band, she said, always gets noticed.

McDonnell, however, accepts that for all the people who find delight or meaning in the garden, a few won't.

"I've seen a lot of people get straight out from a river trip, walk right past the garden without looking up and go straight into the brewery like, I need a beer," he said with an easy laugh. "That's just life."