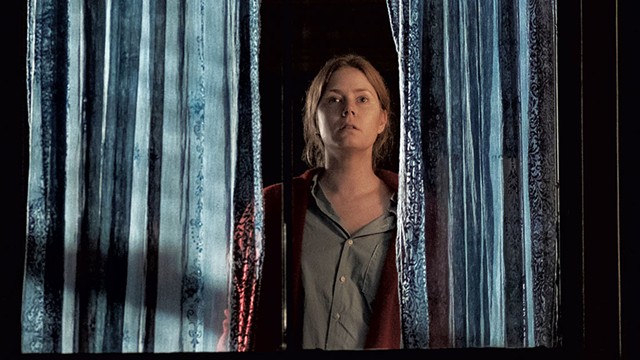 Our streaming entertainment options are overwhelming — and not always easy to sort through. The pandemic turned the film world topsy-turvy. When a star-studded movie that was scheduled for a major 2020 release ends up being dumped on a streaming platform with little fanfare, is that hard luck? Or poetic justice? I investigated the case of The Woman in the Window, directed by Joe Wright (Pride and Prejudice, Atonement) and based on the best-selling novel by A.J. Finn. You can stream it on Netflix.

Anna Fox (Amy Adams) is a child psychologist confined to her home by agoraphobia. Luckily for her, that home is an enormous, ravishing Manhattan brownstone that she can somehow afford despite spending her days drinking, watching old movies and having awkward phone conversations with her estranged husband and daughter.

Another of Anna's pastimes is spying on her new neighbors, the Russells, who just bought a $5.5 million home but apparently never thought to invest in curtains. Teenage son Ethan (Fred Hechinger) comes to say hello, and Anna finds herself warming up to him and his brittle, intense mom, Jane (Julianne Moore).

Next thing she knows, she's watching through her window as Jane is stabbed by an unseen assailant. But when Anna tries to report the crime, she gets bemused stares. Jane Russell, it seems, is alive and well, only now she's Jennifer Jason Leigh. Is a conspiracy afoot, or has isolation made Anna come unhinged?

Story-wise, The Woman in the Window is the most cynical of commercial concoctions — basically The Girl on the Train with a Rear Window twist. If the novel had any psychological complexity or plausibility, few traces are discernible in this adaptation, which dials everything up to 11. Anna makes unaccountable decisions throughout, while the three main male characters — Ethan, his dad (Gary Oldman) and Anna's basement tenant (Wyatt Russell) — act so cagey and sinister all the time that they might as well have "Suspect Me" tattooed on their foreheads.

The dialogue, by playwright Tracy Letts (who also plays Anna's own shrink), is weirdly arch. The only scene in which any of these characters calm down and act like human beings is the single one that Adams and Moore share. Lit like Kim Novak in Vertigo, Moore gives it all she's got, but it's over too soon. Add to this a painfully formulaic ending and some dropped threads — perhaps due to reshoots — and it's easy to see why the movie is getting panned.

And yet, and yet — nobody could ever mistake The Woman in the Window for a Lifetime thriller. Armed with the cinematography of Bruno Delbonnel (a Coen brothers collaborator) and the music of Danny Elfman, Wright has not shied away from the material's obviously Hitchcockian elements or tried to make the concept his "own." He's made a full-on pastiche that crosses the line from homage into high camp.

Dutch angles. Overwrought musical cues. Strategic use of light and shadow and patches of saturated color. Frequently seen with a blanket or bathrobe clutched around her and a noir film playing over her shoulder, Anna seems to float on a tide of liquor and unease. If this film were set in 2020, she'd fit right in. When circumstances force her to leave her home, she grabs an umbrella to shield herself from the outside world; it opens with the snick of a knife being unsheathed.

With effects like that, Wright puts the viewer inside Anna's unsettled mind. For her part, Adams does her damnedest to make the character operatically compelling: One second she's cringing; the next, raging. She's not afraid to be messy and unglamorous and even dislikable, and it all might work if only there were more to Anna. But the dark secret behind her current condition is so obvious that viewers could script the reveal long before it arrives.

Would a movie like this seem more impressive on the big screen, where we could better savor its delirious visuals and stylized performances? Maybe. On Netflix, which churns out psychological thrillers by the truckload, it's easier for something like The Woman in the Window to get lost in the shuffle. It's worth a look for its aesthetics, but this Window has nothing new to reveal.

Rear Window (1954; Kanopy, Shudder, rentable): If you haven't seen Jimmy Stewart and Grace Kelly in this classic, what are you waiting for? You may be able to watch it free with your public library card.

"Bates Motel" (2013-17; Peacock, rentable): Adams makes a nice diva for a Hitchcock pastiche, but I'd rather watch Vera Farmiga go way over the top playing Norman Bates' mom in this A&E series. If you can get past the concept of a Psycho prequel with teens, it's actually pretty good!