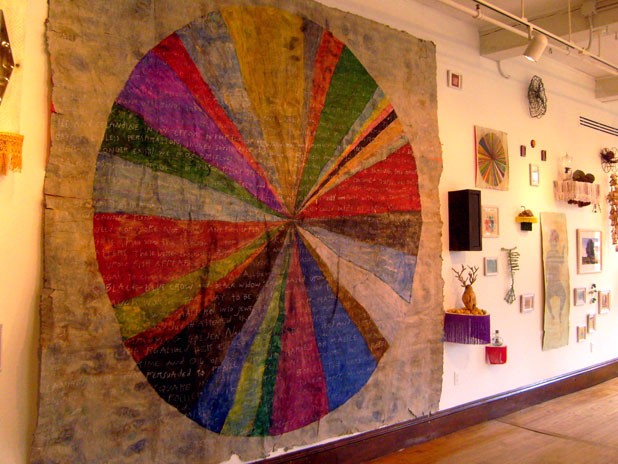 Circus man P.T. Barnum’s Fiji Mermaid was a wondrous piece of 19th-century humbuggery at Barnum’s American Museum in New York City. She wasn’t a pretty, Hans Christian Andersen sort of creature, but grotesque and evidently mummified. The mermaid would have fit right into Charles Papillo’s solo installation of enigmatic items, called “Things You Wanted to Make Real,” currently at the gallery of Jager Di Paola Kemp Design in Burlington.

Papillo’s occasionally dark, Dadaist exhibition is a collection of nearly 80 pieces, ranging from a colorful, segmented fortune wheel painted on a 10-by-10-foot sheet of handmade paper and titled “Red Flame Bird,” to items as small as the dried paw of a raccoon placed in a large pickle jar. It’s as if the contents of a giant cabinet of curiosities have been removed and carefully arrayed on the expansive wall of JDK’s gallery. Papillo includes found and created sculptural items, mixed-media works on paper and small assemblages of articles positioned on tasseled shelves in his mystifying display.

The original Fiji Mermaid was destroyed when Barnum’s museum caught fire in the 1860s, but other versions of the oddity remain. Papillo’s is a contemporary rendition. While Barnum’s creature was cobbled together from the torso of a monkey and the tail of a fish, all covered in papier-mâché, Papillo’s “Scapula Mermaid” is crafted from steel and ceramics. It hangs vertically, like a strange skeleton on the gallery wall, stained a dull turquoise with ruddy highlights. The mermaid’s top half is a mammalian rib cage, while the lower half is delicately piscine.

The jackalope is another chimerical hybrid, one most often seen in postcards sent from roadside attractions in the Mid- and Southwest U.S. Papillo’s “Jackeloupe” is an organic abstraction standing on a shelf, surrounded by small lumps of painted ceramic pebbles. The form is like a large potato, with antlers and vertical lines, perhaps indicating fur, incised over it. It seems primeval, like a three-dimensional petroglyph. The puckish title combines jack rabbit and cantaloupe, rather than jack rabbit and antelope.

Two of Papillo’s most striking works on paper are the outlines of larger-than-life babies. Most of the artist’s drawings seem influenced by “primitive” folk art such as that of Bill Traylor, or by Kiowa ledger drawings, but his are much larger scale. Vertically composed and about 2 by 5 feet, “Anatomy of an Urchin Baby’s Stomach” is a black-and-white line drawing except for its esophagus and stomach; these are assiduously decorated with thin strips of color. The words “gurgle” and slurp” appear in a sort of mod script inside the baby.

“Anatomy of an Urchin Baby’s Brain” has the same scale and concept, but here the brain is multicolored, and the interior words are “pitter patter.”

Words appear in some of Papillo’s other works on paper. A sort of fairy-tale prose poem is scrawled across the monumental “Red Flame Bird” — his pizza-sliced circle with wedges of blue, various reds, greens and purple. The piece is the central anchor of the exhibition, and the script is subtle enough not to overwhelm its visual presence.

“Untitled 1” is a wall-mounted abstraction with a materials list of ceramic, steel, vulcanized latex, paper and pigment. The organic-looking form is more graceful than most of Papillo’s works. It’s like a wreath of tubes, similar to a species of coral, and ranges up to about 3 feet in diameter. The piece is the color of a wasp nest, but the insides of the tubes are darkened with Payne’s gray.

Items in Papillo’s “Things You Wanted to Make Real” easily stand on their own as individual artworks rather than constituent parts of a large installation. Having made the strange objects for this exhibition, perhaps Papillo will transform his “Okinawan Cat,” “Duel Harpsichord” and “A Raccoon’s Hand” into his own version of the “greatest show on Earth.”