Better known for going rogue, Sanders strikes a deal with Sen. John McCain to reform the Department of Veterans Affairs. 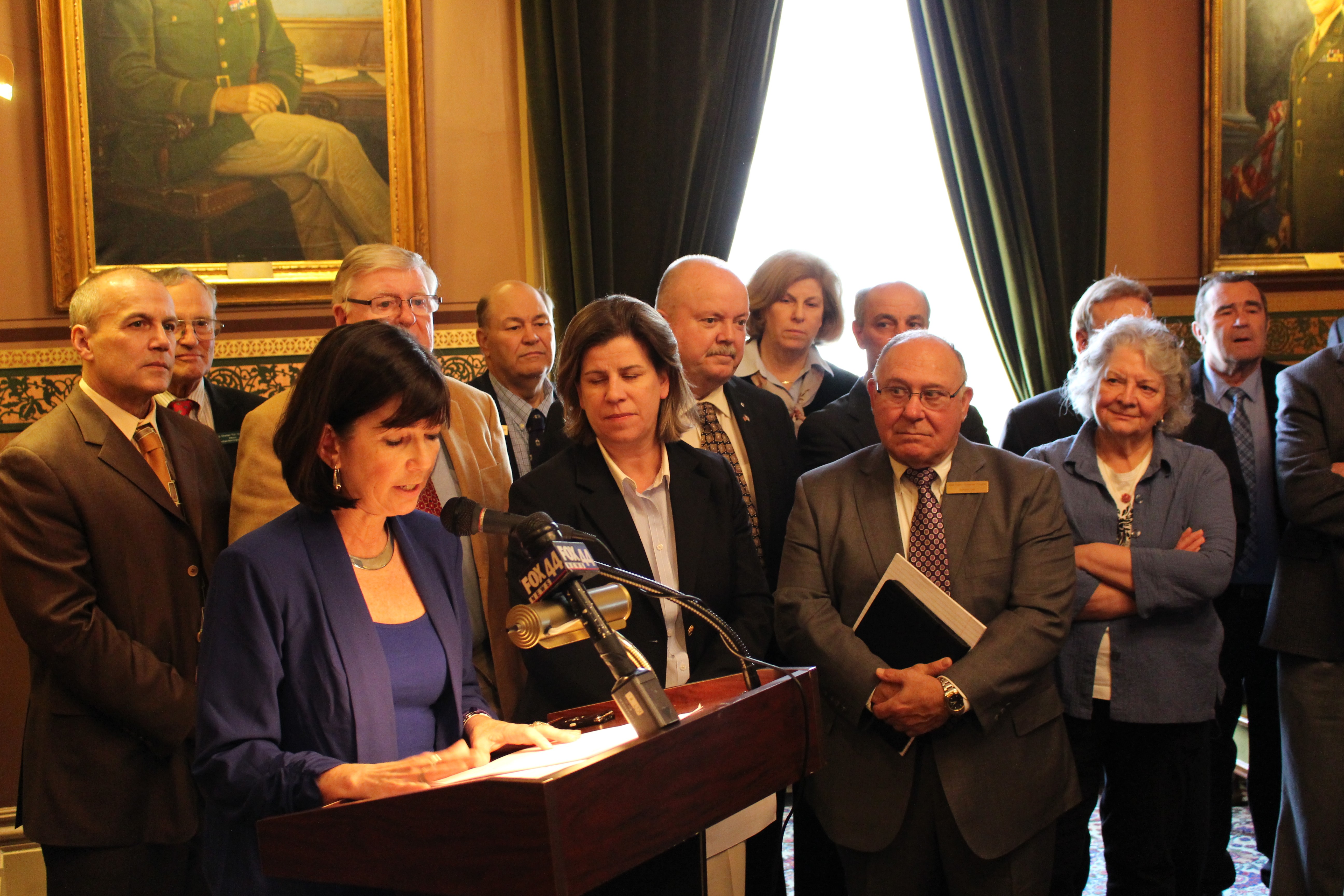 Could things get any worse for the Vermont Republican Party?

That was a common refrain back in November 2012, when the broke-as-a-joke GOP lost all but one statewide office and managed to become an even slimmer super-minority in both houses of the legislature.

Turns out, things could get worse — and unless something radical changes before Thursday at 5 p.m., they will. That's when nominating petitions are due for those seeking public office this fall — and when we're likely to find out that the only top-tier Republican seeking statewide office in November is incumbent Lt. Gov. Phil Scott.

Allow that to sink in for a minute.

Even two years ago, at what seemed an ebb tide for the Vermont GOP, the party managed to field reasonably credible candidates for most statewide offices, with the exception of secretary of state. Now it's just fielding excuses.

"Although we would certainly welcome a full slate, I think the challenge of unseating incumbent Democrats is something that's very difficult for people to come to grips with," says party chairman David Sunderland, adding, "It's not over 'til Thursday."

"I came to the conclusion that running was not the right thing to do at this point," says Brock, a former state auditor and senator. "It depends on who you talk to as to whether you can or cannot win. I think everybody knows running against a well-funded Democrat in a state that tends to tilt to the left would be a difficult challenge, but not necessarily an impossible one."

In the weeks before he made up his mind, Brock and his supporters tried in vain to unite the party around his potential candidacy and clear the field of any potential opponents. But Scott and Sunderland, who wrested control of the party apparatus from Brock's allies last fall, declined to rally around him. While Brock won't directly criticize his fellow Republicans, he says the party could — and should — be doing more.

What would it take to beat Gov. Peter Shumlin, the two-term Democrat who filed papers Monday to run for reelection?

Pretty much the only someone else left is Scott Milne, the little-known president of a family-owned travel agency who emerged from the political ether last month to say he was interested in a run.

Strangely, the Pomfret resident seemed more interested at the time in a primary race against Brock or Lisman than a general election fight against Shumlin, arguing that a primary would strengthen the eventual nominee. Now that Brock's out, Milne says he has to "rethink whether there's a strategy where I could win."

Milne's forthright assessment of the challenges he'd face is refreshing, as is his apolitical demeanor. But running for office and asking people for their time, money and votes takes a certain self-confidence, misplaced or not. And in seemingly every interview he gives, the lackadaisical maybe-kinda-sorta candidate seems intent on making clear he thinks he's got no chance of winning.

Republican strategists are quick to argue that their focus has never been on winning statewide races in 2014, but rather on picking up seats in the legislature.

"I think that our priorities are where they should be: in the House and Senate," says Vermont GOP political director Brent Burns. "We have to build a bench for us to be successful in the future."

That's true, but building a bench means fielding candidates for state treasurer and auditor — not just state rep from Rutland. And without compelling candidates at the top of the ticket, it's pretty hard to turn out your voters in a nothingburger of a midterm election.

So, could things get any worse for the Vermont GOP?

Yes, if one of Scott's two opponents — Democrat John Bauer or Progressive Dean Corren — qualifies for public financing by Thursday, giving either up to $200,000 to lob at the Republicans' last man standing.

Or if Milne pulls the plug on his proto-candidacy shortly before Thursday's deadline. Then the only one left on the Republican ballot might be Emily Peyton, the Putney leftie who runs for office nearly every election.

But don't worry. Sunderland says "there's other people" who could still get in the race.

Asked Tuesday morning whether such mystery candidates could collect 500 signatures by the deadline, Sunderland said, "In 48 hours? I guess it's possible."

So what about those legislative races?

As usual, plenty of incumbents and potential challengers are waiting 'til the very last minute to file their nominating papers — to fake out potential opponents or because, you know, they still need a few more signatures. Even House Speaker Shap Smith (D-Morristown) insists he's still on the fence, despite having been spotted by Seven Days' Mark Davis on Sunday gathering signatures in Morrisville.

"I wouldn't report that I'm running for reelection until I turn my signatures in," the speaker cautioned.

Thanks for the advice!

The biggest news out of the House thus far is that veteran Appropriations Committee chairwoman Martha Heath (D-Westford) is bowing out after 22 years in office.

Heath was facing a challenge from economist Robert Bancroft, one of 82 Republicans whom Burns expects to run for the 150-member House. Between 116 and 120 Democrats will also seek election, according to Vermont Democratic House Campaign director Ben Palkowski, as will at least 16 Progressives, according to party executive director Rob Millar.

"It's no secret that this is going to be a pretty low-turnout year, and, historically speaking, that tends to work against us," Palkowski says. "We have a solid slate, but we're going to have to put forward a solid effort to remain even."

Meanwhile, three Democrats in the 30-member Senate announced last week they won't seek reelection: Sens. Bob Hartwell (D-Bennington), Peter Galbraith (D-Windham) and Don Collins (D-Franklin). None of those retirements should dramatically alter the balance of power in the Senate, which is controlled by 23 Democrats and Progressives.

In conservative Franklin County, Collins was expected to face a tough fight against former House Republican Dustin Degree, who narrowly lost a senate bid in 2012. Now Degree and incumbent Sen. Norm McAllister (R-Franklin) could face off against longtime Democratic senator Sara Kittell, who retired in 2012, or two other Democrats pondering a bid.

In addition to Franklin County, Burns says he expects Republicans to run strong races in Washington, Orange and Rutland counties.

"If you attack everywhere, you attack nowhere," Burns says. "We're trying to go about this election cycle more smartly than we have in the past."

Throughout his nearly 24 years in Congress, Sen. Bernie Sanders (I-Vt.) has been dogged by the criticism that he talks a good game but rarely gets anything done. Fairly or unfairly, his critics have charged that he's more willing to lose on principle than win by compromise.

In February, the Burlington pol tried to change that perception.

Then 13 months into his tenure as chairman of the Senate Committee on Veterans' Affairs, Sanders had assembled a $20 billion bill to improve services for veterans. Jam-packed with politically popular measures and supported by veterans service organizations, the legislation seemed too big to fail.

But fail it did. Republicans criticized it as too big to pass and insisted on adding to it new Iranian sanctions opposed by the White House. In the end, the bill fell three votes short of clearing a 60-vote procedural hurdle.

Veterans' groups expressed their displeasure not only with the GOP for opposing the bill, but with the majority party for allowing partisanship to derail the debate.

Not everyone was happy with Sanders, who failed to bring along his committee's ranking member: Sen. Richard Burr (R-N.C.).

"I don't want to disparage his efforts, because he certainly has the interests of veterans at heart," says American Legion legislative director Louis Celli. "I read something a while ago comparing Sen. Sanders to more of a pugilist than a negotiator. I think he's happy in battle."

"But that doesn't work so well," Celli says, when the constant threat of filibuster requires minority party buy-in.

With the nation suddenly focused on veterans' issues, owing to the lingering scandal over long wait times and falsified records at Veterans Administration hospitals, Congress was eager to act — on something. The House passed legislation making it easier to fire senior VA officials, but Senate Democrats balked, worrying the bill stripped workers of their rights.

Early last week, Sanders prepared to introduce his own legislative response, which included several provisions from his February bill. Meanwhile, Burr and three Republican colleagues, including Sen. John McCain (R-Ariz.), did the same — only their bill focused on allowing those facing long wait times or living more than 40 miles from a VA hospital to seek private care on the public dime.

Then something unusual happened. Instead of dismissing Senate Republicans and attempting to jam through his own proposal, Sanders sat down at the negotiating table.

"He had been looking for a Republican to talk to about this and had been reaching out to Sen. Burr and getting nowhere," says Michael Briggs, Sanders' spokesman.

But McCain, who represents the Phoenix VA facility at the center of the scandal, was willing to bargain. Starting last Wednesday, he and Sanders held a series of face-to-face meetings "to see what they could agree on," Briggs says. By Thursday afternoon, they'd struck a deal, which they proceeded to outline on the Senate floor.

Most important to Sanders, the bill would authorize the VA to lease 26 major medical facilities in 18 states and invest $500 million in hiring new doctors and nurses. Most important to McCain, it would create a two-year trial period during which underserved veterans could seek care at non-VA facilities. Acceptable to all, it would make it easier to discipline VA managers, while affording them the right to appeal.

In his remarks on the floor, McCain seemed pleased with his unlikely new partnership.

"I'd like to say to the senator from Vermont that I respect a great deal the work that he has done on this legislation," he said. "I respect the fact that Bernie Sanders is known as a fighter. And it's been a pleasure to do combat with him."

The original print version of this article was headlined "Party Time"