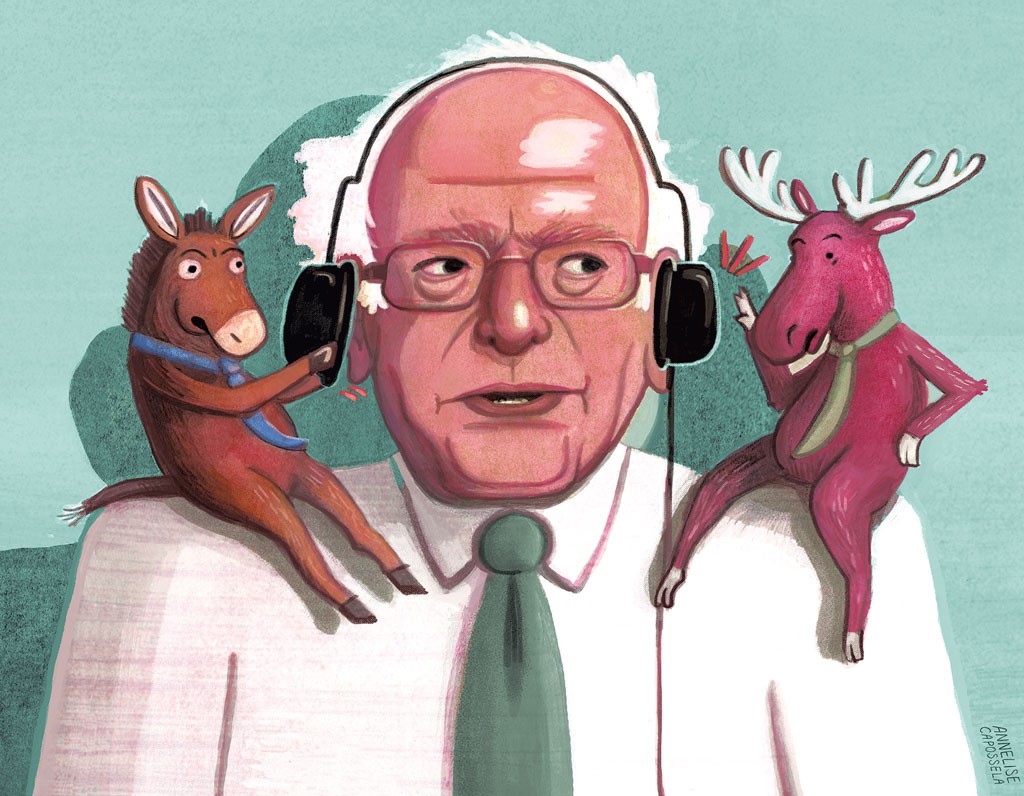 As he climbs in the presidential polls, Sen. Bernie Sanders (I-Vt.) is demonstrating that a politician without a party can achieve success. All the victories Sanders has scored to date — four in Burlington mayoral races, eight in contests for the U.S. House and two in U.S. Senate elections — have occurred outside the traditional two-party system.

The 74-year-old maverick has also eschewed involvement in the third party that he spawned as a sort of immaculate conception. The network of local leftists that helped engineer his first mayoral win sought to give structural form to its underlying political principles. Sanders subsequently did little to help them build an organization.

"He was focused on being mayor," recalled George Thabault, Sanders' assistant during part of his tenure in city hall. "There was no time to talk about party building. He left that to others."

The resulting Progressive Coalition became — and remains — a major force in Burlington politics. After declaring itself the Vermont Progressive Party in 1999, "Progs" have gone on to win a dozen or so state legislative elections outside Chittenden County. But Sanders, widely considered the party's godfather, has never joined its ranks, nor has he ever run for office under its banner.

And Sanders is no more Dem than Prog, even though he's running for the Democratic Party's presidential nomination. Having long lambasted the Democratic establishment as a tool of Wall Street, Sanders is now vulnerable to charges of opportunism. Pundits are dredging up his declaration at the 1990 Socialist Scholars conference in New York: "It would be hypocritical of me to run as a Democrat because of the things I have said about the party."

Throughout that career, Sanders has leavened his radicalism with pragmatism. He makes tactical compromises that he thinks will advance his political strategy, as well as his personal ambitions, without violating his fundamental beliefs.

Sanders sees running in the Democratic primaries as a way of transmitting his message to — and mobilizing — a mass audience. And the Democratic Party has welcomed his involvement in its presidential nominating process. "Throughout his service in the U.S. House and Senate, Bernie Sanders has clearly demonstrated his commitment to the values we all share as members of the Democratic Party," Debbie Wasserman Schultz, the party's national chair, declared in response to the April announcement of his candidacy.

Most Democrats in Congress regard Sanders as an ally, not an interloper. He joined the party's House caucus after entering Congress in 1991. The Democratic leadership on Capitol Hill has allowed Sanders to accrue seniority as though he were a Democrat and, in 2013, appointed him chair of the Committee on Veterans' Affairs.

The friendly relationship has a financial dimension, as well. Sanders' Progressive Voters of America PAC contributed $15,000 to the Democratic Senatorial Campaign Committee early this year. And the committee donated $37,300 to Sanders' first campaign for the Senate in 2006.

University of Vermont political scientist Garrison Nelson cites a respected source in suggesting that Sanders made a deal with the Dems to ensure the success of his first senatorial bid nine years ago. Nelson said then-congressman Barney Frank told him the Democratic Party agreed not to run a candidate against Sanders in Vermont's 2006 U.S. Senate race in return for Sanders persuading the Progressives to stay out of the contemporaneous race for the state's lone U.S. House seat. Sanders easily defeated Republican Rich Tarrant in a Senate race the Dems did not contest, while Democrat Peter Welch prevailed over Republican Martha Rainville in the Prog-free battle for an open House seat.

Frank, a Massachusetts Democrat, denied the Nelson-sourced claim of a Sanders-Dems deal when WCAX reported it in 2005. Such a mutually beneficial arrangement had been "my inference," Frank told Roll Call, a Capitol Hill publication. "There is no actual 'deal' that I know of."

Jeff Weaver, then Sanders' chief of staff and now his presidential campaign manager, told Seven Days columnist Peter Freyne in May 2005 that while there was "no deal" between Dems and Progs, "ongoing talks" between the two parties were taking place. Sanders' office had communicated with leaders of the Vermont Progressive Party, Weaver added.

Ten years later, Sanders will not say exactly what happened; he declined through his spokesman to be interviewed for this story.

More awkward moments await the party-free independent. Charlie Bass, a Republican former congressman from New Hampshire, suggested in a Washington Post op-ed in June that Granite State officials are likely to deny Sanders a spot on the ballot in the state's Democratic primary next February. State law stipulates that candidates must be registered members of a party on whose ballot they wish to be listed, Bass pointed out.

In a recent telephone interview, Devine said the campaign would promptly go to court in the "unlikely" event that New Hampshire officials seek to prevent the independent from taking part in a primary that's open to independent voters.

Devine expressed confidence that Sanders' name will appear on the ballot in every jurisdiction in which presidential primaries are held next year. Each state has its own requirements for ballot access, Devine noted. Meeting all of them is "very hard to do," he added, and can be seen as "a fair test of how well you can run a national campaign." It's one the Sanders field operation, headed by his longtime Vermont aide Phil Fiermonte, is certain to pass, Devine insisted.

Running as an independent in the Democratic primaries presents complications, for sure, but there are advantages, too. Sanders would probably not have become a national political star had he joined the Progressive Party. While he's acceptable to the Democratic Party's power structure as an independent, he would not be as a Prog.

Could Sanders have been thinking that far ahead while serving as Burlington's mayor from 1981 to 1989? Doubtful. So why did he remain apart from the local political party that his mayoral victories inspired?

One, proposed by Mark Furnari, a Burlington veteran of left-wing party-building efforts, can be summarized as: Why mess with success? "Once he won the mayoralty, his identity quest was over," Furnari said. "Bernie said to himself, 'Am I better off affiliated with [the Progressives] or with the Bernie Sanders label?'"

Burnishing the Bernie brand is consistent with Sanders' embrace of "the great man of history" approach to politics, suggested Terry Bouricius, a Progressive former local and state officeholder. "He intellectually likes the idea of a mass movement but is emotionally rooted in the concept of the great leader," Bouricius remarked.

Former Progressive Burlington councilor Tom Smith had another theory. "Bernie is from a working-class family that knew economic hardship, and he has always been suspicious of better-off persons," Smith said. "He saw that the Progressive Coalition was composed almost entirely of white, middle-class, college-educated people. He didn't want to affiliate with that." He also said Sanders was uncomfortable with the "more European-party approach" favored by Progressives, whereby candidates were expected to endorse the party's entire platform.

Another reason, poli-sci prof Nelson suggested, was Sanders' experience in the 1970s when he did belong to a third party: Vermont's Liberty Union Party, led by hardline leftist Peter Diamondstone. "Bernie had to deal with Diamondstone's craziness and was not about to take the risk again of being associated with a party that could be taken over by extreme leftists," Nelson said.

"After Liberty Union, he was definitive about avoiding that kind of situation," confirmed Ellen David Friedman, a longtime activist devoted to building the Vermont Progressive Party.

The Liberty Union experience may also have reinforced for Sanders an understanding that third parties never amount to much in the U.S. political system. Sanders would have been aware of the cautionary case of the 1940s-era U.S. Progressive Party, Nelson suggested. "It was taken over by Reds," he noted. Its presidential candidate, Henry Wallace, won only 2.4 percent of the vote in the 1948 election.

Not being beholden to any political organization enables a politician to be more closely in touch with the views of his or her constituents, observed Gary De Carolis, one of the early Sanders supporters on what was then called the Burlington Board of Aldermen. De Carolis said that kind of thinking caused him to run as an independent, not as a Progressive. And the same is probably true for Sanders, he posited.

Running independently may also have helped Sanders attract votes from Democrats and even some Republicans who are willing to support a nonaligned candidate but not a member of a competing party. Conversely, however, when a formidable figure like Sanders refuses to join a simpatico party, it becomes harder for that party to attract political talent, some observed.

"There's no question that if Bernie had been a Progressive and done as well as he has done, it would have been of great benefit to the party," David Friedman acknowledged.

Instead, "He often endorses Progressive candidates, so all the effective benefits of him being a party member are there," said Bouricius.

Sanders' hugely popular performance in the presidential race should offer further advantages to Vermont Progressives, added Emma Mulvaney-Stanak, the party's current chair. She said, "He's exciting people to say, 'Maybe we can work outside the box, maybe we can become politically active and make a difference.'"

Is party building a prerequisite for the "political revolution" Sanders keeps calling for? Maybe. Whatever happens, there's no question who is leading the charge for change in national politics.