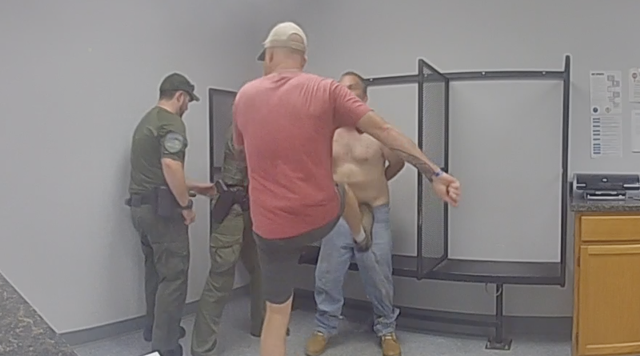 Leaders of the Franklin County Republican and Democratic parties are calling on Deputy Sheriff John Grismore to end his bid for elected office after a video surfaced showing Grismore kicking a handcuffed man.

Grismore, a captain in the Franklin County Sheriff's Office, is the lone candidate for the county sheriff's seat. He won the Republican nomination in an unopposed primary on Tuesday and also garnered enough write-ins to receive the Democratic nomination.

On Thursday, the Franklin County Republican Committee condemned Grismore's actions and asked him to step aside. The Democratic Committee echoed that message on Friday afternoon.

Grismore "cannot continue to credibly campaign for this office," Democratic party chair Zach Scheffler said in a statement. "We Franklin County Democrats join our neighbors in the Republican Party leadership in demanding that Grismore end his run for Franklin County Sheriff.”

The allegations against Grismore became public on Tuesday as voters were headed the polls. The County Courier reported then that Grismore had been suspended after assaulting a detainee over the weekend. The following day, the paper published a video showing the incident.

The video depicts an apparently intoxicated man whose hands are cuffed behind his back. The man attempts to walk forward but falls face-first on the floor because his legs are shackled to a bench. Two uniformed deputies enter and help the man to his feet. They ask him to sit down, but when he doesn't comply, Grismore, wearing street clothes, approaches and kicks him twice in the groin to force him into the seat.

"Sit down!" Grismore yells. "All the way down!"

He kicks the man again.

Other deputies reported the incident to Franklin County Sheriff Roger Langevin, who called Vermont State Police to investigate, according to the Courier. VSP spokesman Adam Silverman confirmed to Seven Days on Friday that the probe is ongoing.

Neither Grismore nor Langevin immediately responded to a request for comment.

Franklin County GOP chair Joe Luneau said he wasn't aware of the incident until after Grismore won the primaries. He said he wants Grismore to step down so that the party can name a replacement.

There isn't much time: Candidates wishing to withdraw must do so before 5 p.m. on the 10th day following a primary, which in this case is August 20. Political parties would then have seven days to submit a new candidate's name for the general election ballot.

If Grismore stays in the race, Luneau said he hopes a write-in candidate could emerge and defeat him.

"The only person who appears to think it might be OK to remain on the ballot for sheriff is Mr. Grismore," Luneau said. "We're in Vermont. I don't care what political party you affiliate with, nobody thinks that's OK."