Side Dishes: The Farmhouse Tap and Grill gets a lounge 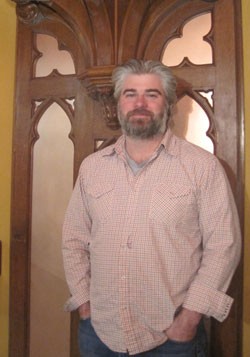 Back in the 1970s, the owner of the McDonald’s franchise on Bank Street in Burlington planned to turn the building’s basement into a PlayPlace.

The kid-friendly jungle gym and ball pit never came to fruition, and the basement remained storage space. But this New Year’s Eve, that lower room will finally see some merrymaking. Jed Davis, co-owner of the Farmhouse Tap & Grill — which replaced McDonald’s — has transformed it into his restaurant’s new lounge.

Like an old-time speakeasy, the addition is indicated only by a carved wooden door near the eatery’s entrance. When guests venture downstairs to what Davis has been alternately calling “the Parlor” and “the Rectory,” they’ll be surrounded by antique wood. The fittings come from a Vermont barn and a Northeast Kingdom church, reclaimed by The Architectural Salvage Warehouse in Essex. the turn-of-last-century bar was most recently seen at 38 Main Street Pub in Winooski.

Church pews will serve as banquette seating and add to the ecumenical mood of those sipping local beer or snacking on chef Phillip Clayton’s small plates. Those dishes will include all the same Vermont cheese plates, housemade charcuterie and other bar delicacies served upstairs, with the exception of burgers and dinners. “I’m working on a great little [communion] wafer,” Clayton jokes.

While giving a tour of the still-unfinished space, Davis predicts that, once complete, the room, with its 9-foot-tall ceilings, will have a “dark, cozy, loungy feel.” He proudly points out the hidden alcove that will house a dartboard, complete with an antique, dark-wood counter for players to stash their brews.

The lounge will be open every day from 4:30 p.m. until the restaurant’s closing. Davis says it will serve as a cold-weather alternative to Farmhouse’s popular beer garden.

A PlayPlace for grownups, indeed.