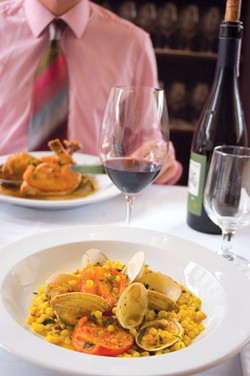 The squash blossoms will never fade from memory, but L'Amante will serve its final Taleggio-stuffed, honey-drizzled flowers on Friday, August 28. The beloved Italian eatery is closing after 12 years in business. "We've been working like dogs these past few weeks with everyone wanting one last dinner," owner Kevin Cleary told Seven Days in an email.

After the closure, Cleary and his wife and co-owner, Kathi, will refocus their attention on their nearby Vin Bar & Shop, where they plan to expand their tapas menu and offer more flights and tastings.

Back at 126 College Street, the Clearys' staff will shift gears, and not to job hunting. When chef Herve Mahe (most recently of the Mounted Cat at the Hilton Burlington) takes over early next week, he'll do so with the L'Amante staff on board. After minor renovations, Mahe and team will open a classic French bistro called Bistro de Margot in the space in September.

Mahe spent years bouncing around Michelin-starred hotel restaurants in his native France and in London. He continued working in fine dining after moving stateside in 1995.

Now on his own, Mahe says he's aiming for a casual, classic French bistro feel. Small plates on the menu include escargots in garlic butter and terrines pressed with meats and fish. These accompany entrées such as a two-and-a-half-pound côte de boeuf for two, several varieties of moules frites and roast quail from Springfield's Cavendish Game Birds. The local meats will come sided with produce from area farms. "We want to be part of the community," the chef says. "And to be part of the Vermont Fresh Network — that's an important part of what we're going to do."

Paul Gibson of Dedalus Wine will head the bistro's bar program. To start, Gibson's 50-bottle French list will span the range from affordable to high-end, while cocktails will feature local spirits and mixers.

Mahe hopes to open September 10 but concedes that doing so will mean a "tight turnaround." If he misses that deadline, he says he'll be open by mid-month.