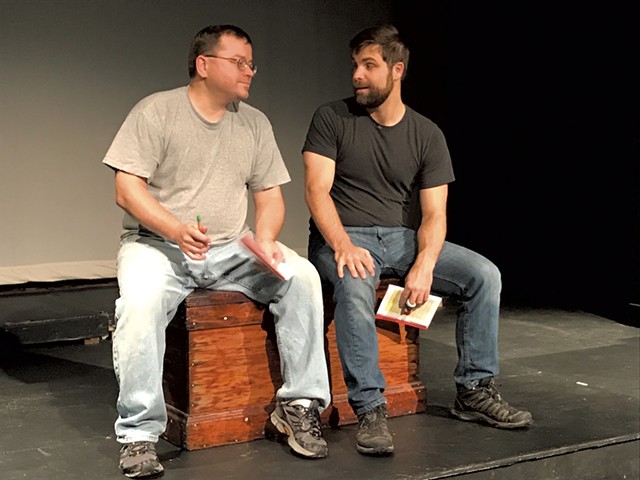 The Parish Players have spent the past year commemorating 50 years of creating theater in Thetford. Their activities include launching a capital campaign, throwing a festive gala, and producing Steel Magnolias, Jerry Finnegan's Sister and their annual 10-minute-play festival. In addition, board members wanted to mount a final show to celebrate the volunteer-run community theater's success. To this end, they decided to return to their roots and revive Scooter Thomas Makes It to the Top of the World, written by Peter Parnell.

Scooter Thomas had its world premiere with the Parish Players in 1979, and it marked the start of Parnell's writing career. He would go on to create Broadway and off-Broadway plays, to work for television — including "The West Wing" — and to produce some notable children's literature. (Remember the controversial And Tango Makes Three, the true story of a bonded pair of male penguins living in the Central Park Zoo that hatched a chick together?)

As Parish Players board member Henry Higgs put it, "This guy got his start right here!"

Charged with digitally archiving the theater's history, Higgs came across records of Scooter Thomas. Parnell, now 64, had been a "frequent performer" with the Parish Players, and Scooter Thomas was his senior project at Dartmouth College in 1975, said Higgs. After the play premiered (outside of an educational setting) with the Parish Players, it was presented at the Eugene O'Neill Theater Center National Playwrights Conference and published by Dramatists Play Service.

Parish Players director Kay Morton saw the show 38 years ago and remembers it as "funny, sad, poignant and illuminating." She added, "It always stuck with me."

Scooter Thomas is a two-man play that takes place largely in the memory of Dennis Wright following the death of his childhood friend, Arthur "Scooter" Thomas. In the wake of his loss, Dennis is left to reminisce about the great times they had together; to retroactively pinpoint where their friendship drifted apart; and to consider, now that he's an adult, how much he really knew of his friend.

Although no definitive conclusion is reached, Parnell also raises the question of whether Scooter took his own life. He ostensibly died in a hiking accident, falling from a cliff. The question of suicide hangs over the play — and over Dennis' memories.

Morton conceded that her perception of the original production colors her staging of the revival, but she's happy to delve deeper into the play. "Back then, I was just an audience member," she said. "Since then, I've had my own experiences with friends and family who've battled depression. I think it touches all of us."

This time around, Scooter Thomas is carried by actors Will Moore (Dennis) and Erik Gaetz (Scooter). Morton described the original actors as "rubber bands" and emphasized that Moore and Gaetz bring a similar energy to this highly physical show.

"The play is a full-length one-act, and Dennis never leaves the stage," she said. "He delivers multiple monologues and plays at least 10 different characters."

Though lighting shifts convey mood or location, there are no costume changes to denote a new character. Instead, the actors "move in and out of the various vignettes of Dennis' memories with subtle changes in their voices, gait, posture and expressions," Morton explained. She said it's been "wonderful to watch" the characters abruptly transition from age 10 to 30 in rehearsals.

Morton also noted that, while Scooter Thomas is far from a holiday play, mounting a show that grapples with depression, grief and loss hits a poignant note during the supposedly feel-good season.

"There is this lost section of people who we don't think about — we don't want to think about — at this time of year," she said. "The holidays are supposed to feel joyous, but there are also those who feel despair. It's an opportunity to reflect."

In reviving Scooter Thomas, the Parish Players are clearly proud that Parnell had his humble beginnings at the Thetford institution. If the holidays are a time of reflection, as Morton asserted, reviving a play about memories in such a small community certainly has a nostalgic effect.

When Parnell was notified of the revival, according to the Parish Players, he responded by email: "Your reminding me of the premiere of the play put me right back to the night Peter Hackett [now professor of theater at Dartmouth] and I first read it aloud at the Grange, scripts in hand. It was a momentous event for me."

Scooter Thomas Makes It to the Top of the World by Peter Parnell, directed by Kay Morton, produced by the Parish Players, Thursday through Saturday, December 7 to 9, 7:30 p.m.; and Sunday, December 10, 3 p.m., at the Eclipse Grange in Thetford. See website for additional dates. $10-15. parishplayers.org