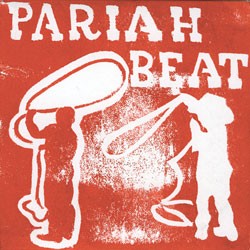 Boston-by way-of-Thetford’s Pariah Beat is one busy band. Since its inception in 2006, the group has self-released two EPs and two full-length albums, totaling more than 30 original compositions in just over a year and a half. That’s prolificacy of Ryan Adams-like proportions. Tabbed by Beantown’s humor and entertainment rag The Weekly Dig as one of “Six Worthies You Might Run Into on the T,” the quintet is a genre-mashing juggernaut, which their fall 2007 EP, Babylon Is Fallen, ably proves.

The EP’s titular opening track is a bouncy Americana-Gypsy number. Think Charlie Daniels fronting Gogol Bordello and you might get the idea. Here the traveling caravan is in fine form, offering a cautionary tale to imperialist-minded Americans.

The fiddle-infused cow-punk of “Come on In,” the disc’s second track, maintains a driving country shuffle. “Listen, son, you better understand / my faith and the Devil walk hand in hand,” sings the entire band during the song’s rousing chorus.

“Front Porch” follows with still more spirited Americana. Continuing on a running political theme, guitarist/fiddler/vocalist Billy Sharff howls, “They’re tellin’ me the water is poison / after I drank it all my life. / My dad always said as a man I would see / it’s just another conspiracy.”

“Tipperary,” a likely nod to the band’s Boston-Irish roots, is a modern re-imagining of the Celtic standard, complete with updated lyrics. Like all the tunes on the EP, it’s a high-energy romp. Sharff’s frantic fiddle and Nick Charyk’s glittering guitar battle for prominence. The musicianship, as always, is loose — perhaps intentionally? — but never sloppy.

Album closer “Love the Pain” is something of an oddity. Given the style and thematic threads of the preceding numbers, its hot-house feel is a bit out of place. Still, it’s a solid track featuring lively but un-credited horn work and devilish wordplay from Sharff.

All in all, Babylon Is Fallen is a worthy sampling from a young band with much to offer. The disc is not without its flaws, but hints at a wealth of burgeoning talent. Brimming with energy, it also suggests these guys — and gal — put on one hell of a live show. Find out Wednesday, March 19, as Pariah Beat hosts “Beyond Iraq,” a community discussion about the war and its (eventual, we hope) aftermath at Montpelier’s Langdon Street Café. Sounds like a bit of a downer, frankly — good thing the band is sticking around to play some tunes afterwards.