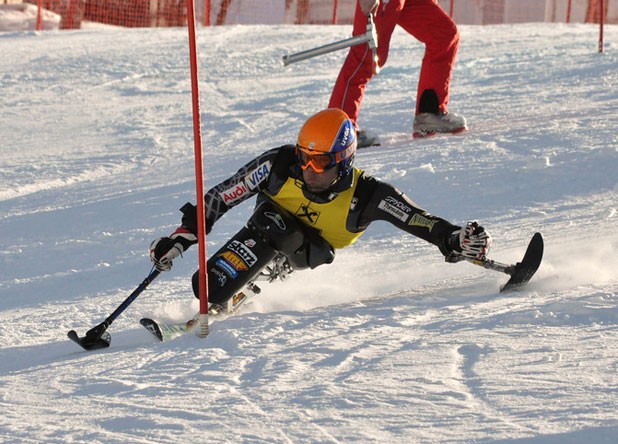 This week, one of the country’s greatest ski racers ever is competing at the Vancouver 2010 Games. He hails from Franconia, N.H., and has a hell-bent, go-for-broke style that sometimes wins him gold and sometimes gets him in trouble.

Huh? Wasn’t that Bode Miller — last month? Nope. This is Tyler Walker, a 23-year-old athlete who just happens to share not only the hometown of the five-time Olympic medalist, but also his talent for flying downhill at highway speeds.

Unlike Miller, however, Walker has no legs. He uses a monoski to shred faster and more ferociously than most anybody — able-bodied or otherwise — and he’s representing New England, and the U.S., at the Paralympic Winter Games.

If you haven’t heard of the Paralympics, you’re not alone. Though they’re staged at the same state-of-the-art sporting venues as the Olympic Winter Games, and though they see the same world-class level of competition, the Paralympics have long been overshadowed by the Olympic extravaganza, and sometimes misunderstood.

“A lot of people confuse the Paralympics with the Special Olympics,” says Maggie Burke, a program coordinator for Vermont Adaptive Ski & Sports. “This is more of an athletic competition for elite athletes, who have trained really hard to get there.”

Walker, who was born with lumbosacral agenesis (that is, with much of his spine missing) and had his legs amputated below the knee at age 4, has been training for the Paralympics for nearly half his life. Like Bode Miller, he learned to carve turns at Cannon Mountain. Walker was 6 when his dad built a sled with cross-country skis bolted to the bottom. The following year, his dad made a seat on a snowboard. “Both of these contraptions were terrifying,” recalls Walker, who eventually learned how to use a professionally made monoski. “But skiing gave me a huge amount of freedom. Strapping into a monoski is like putting on a pair of legs, and it lets me do anything I want, as fast as I want.”

When Walker was 12, he entered his first ski race, competing against members of the U.S. Adaptive Ski Team. “I figured out pretty soon that ski racing could get me all the way to the Paralympics,” he says.

And sure enough, after winning multiple World Cup races and two gold medals at the Winter X Games in Aspen, Walker now finds himself in British Columbia surrounded by more than 500 other athletes from 45 countries. Smaller and more intimate than the Olympic Winter Games (for which more than 2600 athletes descended on Vancouver to compete in 15 different sports with multiple disciplines), the Paralympics are mostly clustered in the pretty alpine village of Whistler. There are just five sports — alpine skiing, cross-country skiing, ice sledge hockey, wheelchair curling and biathlon.

The U.S. has sent 50 athletes to the 2010 Paralympic Winter Games. Though none have Vermont roots in the strict sense, the Green Mountain State has helped pave the way for the Paralympics’ success, thanks to monoskiers Sarah Will, who grew up skiing Pico Mountain, and Chris Waddell, a Middlebury alum.

What’s more, Vermont Adaptive has become one of the premier feeder programs for aspiring ski racers. Serving nearly 1300 kids and adults who have disabilities, the Killington-based organization gives some 3000 ski lessons every winter. “We’re growing — Vermont is building this really cool thing to help folks jump on track for competition, for whatever goals they set for themselves,” says Vermont Adaptive’s executive director, Erin Fernandez, who gives partial credit to the Wounded Warrior Project and other veterans’ programs for adding a new dynamism to disabled sports.

“The Paralympics are making huge progress — leaps and bounds,” says Fernandez. Because fewer than 5 percent of people who have physical disabilities play sports, she explains, young kids may feel the greatest impact of this increased awareness. They experience a “touch-the-rings” moment, says Fernandez, when they realize that learning to, say, master a monoski could help them become part of something much greater than themselves.

“Any kid who participates in sports gains self-esteem, self-confidence, self-awareness,” says Fernandez. “When you see that spark, you feel, Oh, my God, this is awesome. It’s those . . . short and sweet moments when you’re, like, This is what we’re all about.”

The Paralympics still need to make progress in a couple of areas. For instance, there’s a problem facing most Americans who hope to witness an actual touch-the-rings moment from the Vancouver Paralympics: Instead of airing daily competition, NBC is showing just a two-hour “highlights” program — and not until April 10. But Paralympic fans with cable access can now catch the action at 6 p.m. each night through Tuesday, March 23, on Universal Sports, and others can watch on-demand re-airs of the TV coverage at www.universalsports.com.

For their part, some participants in Vermont Adaptive are witnessing the Paralympics firsthand, thanks to the fact that Burke was one of six coaches and program leaders nationwide chosen to travel to Vancouver. She’s bringing 13 student athletes with physical disabilities. And the Games they’re watching are the Olympics without the hoopla — security forces are reduced, travel restrictions on the Sea-to-Sky Highway to Whistler are gone, and tickets are widely available. The event organizers hope more average Joes will get a chance to witness some way-beyond-average feats.

“Disabled athletes might be more humble than Olympic athletes,” says Fernandez. “But their level of dedication is so much more than the best Olympic athletes’, because their programs are so underfunded, and they have longer, bigger goals.”

Watch the YouTube video of Walker soaring over jumps, leaning into banked turns and generally whomping his competitors’ butts to win gold at the most recent Winter X Games, and you may understand his dedication. When Walker was learning to ski, he says, he’d go off jumps every chance he got and would often race his teammates and coaches to the bottom. In monoski cross, he says, “The closed course and safety netting actually make it safer than some of my usual shenanigans.”

And, yes, unlike Miller, Walker is actually pretty humble. “I’m thrilled to be here,” he says from Whistler. “I have a good chance in many of the events, but I am just going to give it all that I have every day, and we shall see what happens.”

As Walker races, sure, he’s thinking about gold. But he’s also thinking about some of the kids watching him. Three years ago, a family from Qatar whose 8-year-old son is also missing much of his spine contacted Walker to ask him about disabled sports. He ended up visiting Qatar several times, once to attend a symposium on incorporating elite-level adaptive sports in university curricula.

“I hope that kids see the Paralympics is all about celebrating the very best in human athletic achievement,” says Walker, “not just proving which country is best.”