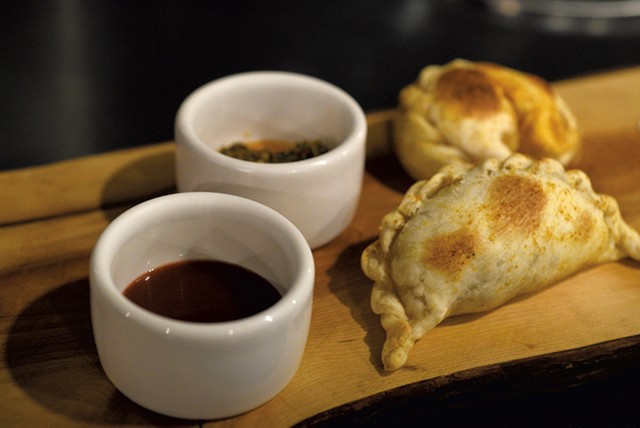 Nothing is better suited to the takeout era than pocket food. A dish that comes in its own edible, usually doughy wrapper and can be eaten sans utensils — such as a hand pie, knish, dumpling, samosa or Pop-Tart — is both charming and efficient. You can chomp while you walk or eat it in the car. Heck, you can stuff it in your pocket and save it for later.

Due in part to its practicality and portability, pocket food can be found all over the globe. There's even a popular blog, the World in a Pocket, dedicated to chronicling "food-inside-of-food."

Empanadas, the savory turnover staples of Spanish, Latin American and Filipino cuisine, are among my favorites of the genre. So, when I heard about Paprika Catering's weekly empanada pop-up, I blocked off a Wednesday evening to drive to Waterbury.

"If we're going to have 25 flavors, I'm going to run out of shapes, for sure." Jacqueline de Achaval tweet this

Jacqueline de Achaval and Jennifer McCabe started Paprika in 2021, hosting their first pop-up at Waterbury's Stowe Street Café on October 20. They made 400 empanadas in four flavors and sold out.

The couple has continued the weekly pop-ups, using Stowe Street Café's kitchen after it closes for the day.

Paprika's menu has grown to seven varieties, each folded into a unique shape according to what's inside: steak, Malbec and hard-boiled egg in the crescent-shaped Buenos Aires; smoked ham, Cabot cheddar and maple syrup in the curled-up Vermonter; or creamy, cheesy corn and chives in the dumpling-like Humita. Don't worry, the empanadas come with a hand-drawn key.

McCabe and de Achaval met over bubble tea at Montpelier's Pho Capital in November 2020 and quickly realized their shared desire to own a food business. Both women had attended French-focused culinary schools: McCabe in New Hampshire and de Achaval in Buenos Aires. 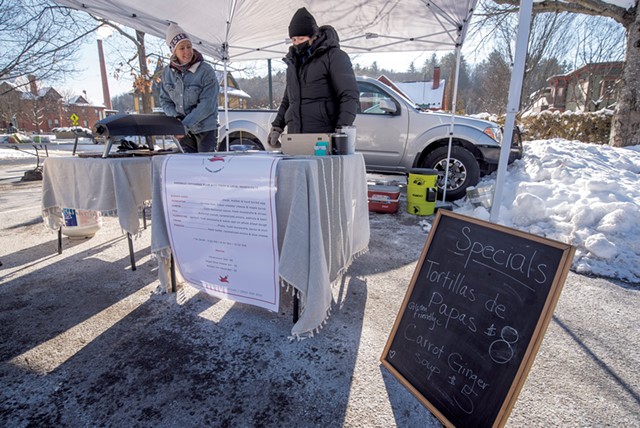 McCabe, 38, then spent 10 years working in restaurants in Colorado, Florida and St. Louis, Mo., including a job with the late Kerry Simon, one of the country's first "celebrity chefs." McCabe left the industry after the first of her two kids was born and now works full time for a regulatory compliance consulting company in Waterbury.

Growing up in Argentina, de Achaval, 32, dreamed of being a ski instructor. After high school, she found a "summer" job in Colorado — where the northern hemisphere's winter was in full swing. Over the next decade, she catered the X Games, worked with "Food Network Star" contestant Susie Jimenez at the Food & Wine Classic in Aspen, worked as a private chef and ran her own catering company, among other jobs. In 2019, de Achaval moved to Vermont and became the sous chef at Burlington's Revolution Kitchen.

"When I moved to Colorado, empanadas were the food I missed the most," de Achaval recalled. In Argentina, they're a ubiquitous street food, sold from kiosks or in restaurants that specialize in them, with some offering more than 25 different fillings. De Achaval also missed the Argentinean culture around eating them — including family rituals of gathering for a weekly "empanada day."

"After the dream of being a ski instructor, I had the dream of eating empanadas every day. So now here I am," she said.

McCabe, who grew up outside of Boston, had only eaten empanadas once or twice before meeting de Achaval.

"One of the first times we made them together, her mom was visiting," McCabe recalled. "I just fell in love with them. I think that they're the perfect food." 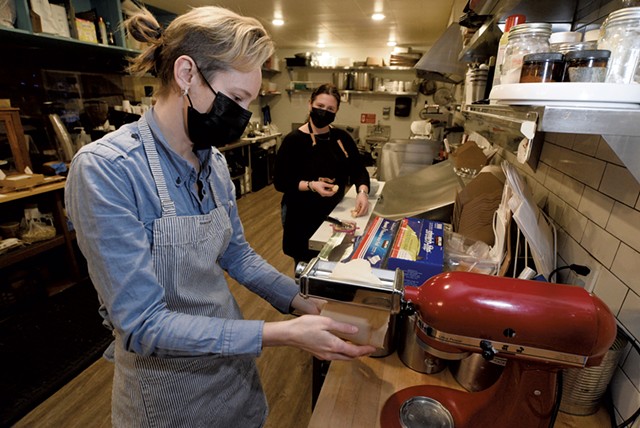 Paprika's empanadas have a traditional Argentinean flour-based dough, which is sprinkled with the business' namesake ingredient, then hand-folded and baked, not fried. Most modern empanadas are made with butter, de Achaval said. But Paprika uses beef suet from East Hardwick's Snug Valley Farm; the fat creates a lighter, flakier crust. (Vegetarian and vegan flavors are made with organic margarine.)

In Argentina, the shapes, styles and fillings vary from province to province. McCabe and de Achaval nod to some of those classic flavors with the hand-cut steak and Malbec wine in their Buenos Aires empanada. They gave another Argentinean classic, ham and cheese, a local twist: maple syrup. The recently debuted Pikachu combines homemade apple butter with caramelized onions and blue cheese.

"We have what we call 'the dope flavor list,'" McCabe added. "We talk about food constantly around here and have created a running list of things that inspire us."

Fruit and fresh herbs are some of de Achaval's go-to ingredients. One dope combo that made the cut early on is the Pruna: plums, fresh mozzarella, bacon and mint. I ordered two of them and ate the first in the car. Its fruity, herbaceous brightness, with just the right amount of smoke from the bacon, was an unexpected antidote to the whipping winter wind outside.

Paprika's empanadas are $4.50 apiece, with deals for three ($12), six ($24) or 12 ($45). Paprika accepts walk-in orders, but I preordered an assortment of 12, sampling each of the six flavors available that evening. I also got chimichurri and Malbec hot sauce for dipping ($2 each), as well as a portion of carrot soup ($5).

My plan was to take the empanadas home, but not a single flavor made it out of the car untasted. I blamed my bites on eating in the dark, with only passing headlights illuminating the key. Really, though, the crimped edges and distinctive shapes were easy to identify by feel — and de Achaval's drawings are as accurate as they are adorable.

Originally, the women had planned to rotate through various flavors with an ever-changing menu. But when the time came to switch things up, they couldn't decide which to eliminate.

"So much goes into developing each one of these flavors that they're like our children," McCabe said. She'd suggested dropping the Fall — butternut squash, caramelized onions, walnuts and basil — based on its seasonal name alone. "I thought we probably weren't selling much of it now, because it's winter. But my intuition was completely wrong."

In fact, the Fall, Paprika's vegan flavor, is the most popular. McCabe and de Achaval were both a little surprised by that. They sell frozen vegan and vegetarian offerings for customers to take home and bake themselves, too. 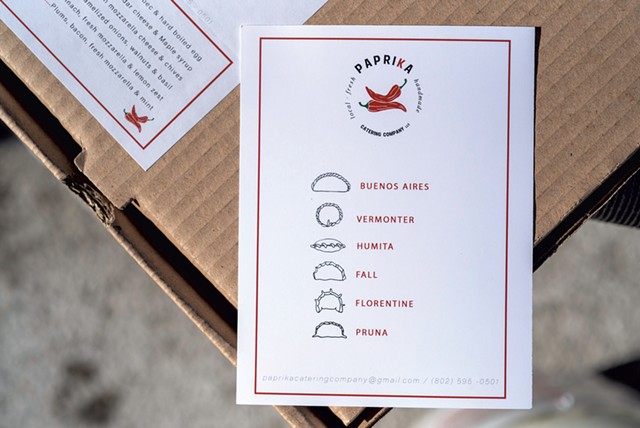 Eventually, de Achaval and McCabe intend to design custom stamps to emboss the corner of each empanada with a flavor-specific mark. That's how it's often done in Argentina, de Achaval explained, though here she favors the idea of farm-centric symbols, such as a cow for the Buenos Aires, rather than the usual letters.

"I love the different shapes," she said. "But if we're going to have 25 flavors, I'm going to run out of shapes, for sure."

McCabe and de Achaval hope that Paprika will help "empanada culture" catch on here in Vermont. In addition to the weekly pop-ups, they're now vendors at the twice-monthly winter Capital City Farmers Market in Montpelier, where they bake empanadas to order in a portable pizza oven. Ultimately, they want to create a wholesale line of empanadas to be sold at local grocery stores and restaurants.

Prepared foods and frozen meals aren't as popular in Argentina as they are in the U.S., de Achaval said. But she thinks it's an approachable, easy-to-cook way to bring the two cultures together, and it will enable Paprika to reach more customers.

"We have super-busy lives and are running all over the place with two kids," McCabe said. "So, the idea that someone can feed their family at home with easy, delicious food is a big bonus for us."

The couple also caters events and is planning one of their own in August: their wedding. "On Tuesday the second, so it's 802," McCabe noted. At the dinner, they'll serve empanadas, of course, skipping plates and silverware.

"We'll still be open on Wednesday," de Achaval added with a laugh.

The original print version of this article was headlined "Empanada Culture"