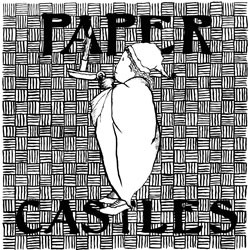 Last year, longtime sideman Paddy Reagan burst onto the local scene as a songwriter with his debut EP Hey! Hi! Hello! OK, perhaps “burst” isn’t quite the correct word, if only that it does a mild injustice to the charmingly sedate, lo-fi material found within the EP. Still, it was a nifty first attempt and introduced Reagan as a worthy addition to the burgeoning local indie-folk scene. As the brains behind booking operations at the Monkey House in Winooski, he’s been instrumental in cultivating that very scene. Now, Reagan returns in a more traditional band-styled setup with his trio, Paper Castles. And suffice it to say that fans of Reagan’s solo work — and generally those with an ear for quirkily crafted, lo-fi art-pop — have yet another solid local release to add to their collections.

“Blue Jeans” represents the EP’s most straightforward-ish number, at least structurally. As we’ve come to expect, Reagan playfully meddles with folk convention, infusing the song with his singular, slackerly charm. “I only knew her in blue jeans,” he sings. “Most of those were torn in the seams. / Yeah, it’s funny how love falls at your feet, or calls to you in a dream.” The song’s punchy finale, complete with a terrific trumpet-led bridge, is surprising and artfully understated as Reagan concludes, “I only knew her in blue jeans. / She swore that she wore a red dress. / Red as the leaves that fall in the breeze and land in a beautiful mess.”

Paper Castles is available as a pay-what-you want download via the band’s website. Those who prefer a more tangible medium can also pick up the CD version when the band plays a pre-honky-tonk gig at Radio Bean this Tuesday, October 6.