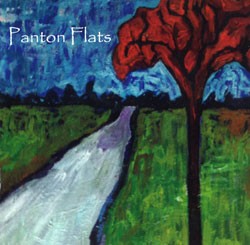 Self-proclaimed supergroup Panton Flats may not boast the all-star lineup that the term typically suggests. Still, the quintet does boast a fine lineage of veteran local players. Collectively, the jam-rock outfit has traded licks with the likes of Billy Joel, Todd Rundgren, Phish’s Mike Gordon and Russell Batiste, to name-drop a few. On their self-titled debut, recorded by über engineer Lane Gibson at Chuck Eller Studios in Charlotte, the Flats serve up a handful of tunes that hint at a burgeoning star power.

The record opens on “The Morning Comes,” written by Vergennes’ Josh Brooks, a well-regarded singer-songwriter and the leader of alt-blues duo Grant Black. Following a lead riff eerily reminiscent of Big Star’s “In the Street” — aka the theme song from “That 70s Show” — the song settles in to a rambling groove complete with a rubber-band bass line, courtesy of Andy Smith, and Chris Wyckoff’s honky-tonk piano. Brooks spins a salacious yarn of late nights misspent with “junkies and dealers at the park and ride.” It’s a rollicking tune, though the bright tone and fine polish sap some urgency from the song’s cautionary “live fast, die young” mantra.

Written by the band collectively, “Dust Bowl Heaven” follows and bears more in common with the early grooves of Phish than the Woody Guthrie ballads its title evokes. But it’s a tight little number, nonetheless, with Wyckoff delivering elastically funky organ work and Brooks a particularly smooth lead vocal turn.

Panton Flats flatline on Bob Levinson’s “Won’t Lose My Stride,” which suffers a terminal case of cornball earnestness — perhaps brought on by middle-aged-white-guy-blues-itis. At no point on the record does the band truly break established genre molds. But they generally play them well. “Stride” seems to actively sublimate itself to rote blues contrivances and convention.

The band rebounds on “Moped Moses,” a quirky, talking-blues-by-way-of-mid-tempo-jam-rock nugget that finds the troubled, titular Moses “trippin’ balls one day sittin’ on the front porch swing” when he encounters his own sort of burning bush. It’s a clever, fun and surprisingly subversive romp.

The album closes on the Wyckoff-penned “Lonesome Road.” The ode to post-Katrina New Orleans is meant to be inspirational. While well intentioned, there’s something disingenuous in both the clunky wordplay and faux-gospel mood that fails to stir the soul.

On the whole, Panton Flats (the album) is an uneven collection, intriguingly vibrant in moments and frustratingly stale in others. Still, Panton Flats’ (the band) pedigree suggests it is more than capable of an improved follow-up.

Panton Flats is available at joshbrooksmusic.com/panton_flats. Panton Flats release their new album this Saturday, February 9, with a show at the Vergennes Opera House.