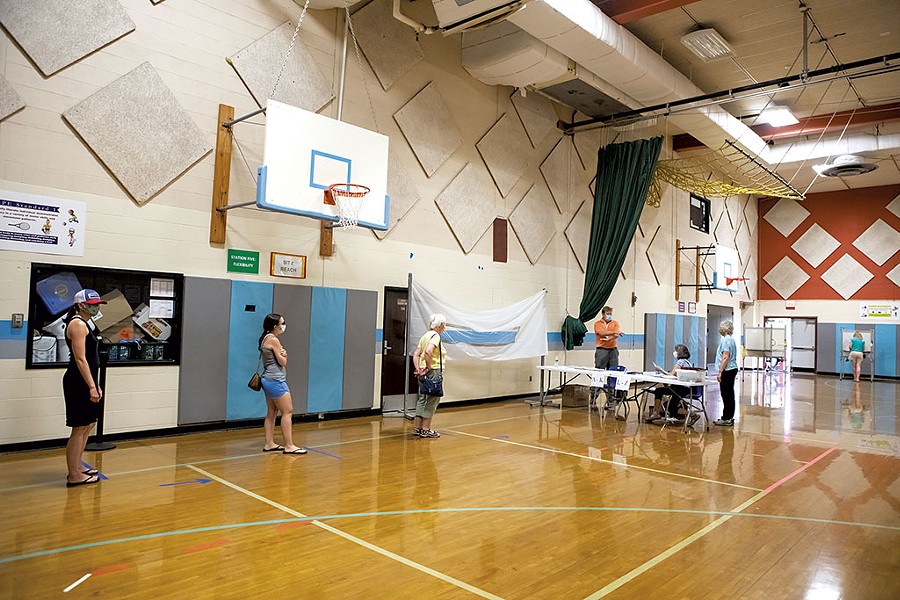 Nearly every person who arrived at South Burlington Middle School last Thursday wore a mask — a pandemic-imposed requirement for those entering the city's polling place.

Inside, election worker Tim Barritt sported a mask and a plastic face shield as he checked in voters and handed out ballots. Those in line spaced themselves at least six feet apart.

Poll workers systematically sanitized the pens that voters used to fill out ballots on the school district's proposed $54 million budget, which would be rejected that day with a 64 percent "no" vote.

After finishing his three-hour shift, Barritt, a 61-year-old city council member and staunch Democrat, said he felt fine with in-person voting in November if these and other commonsense measures were put in place.

"I think it can be done safely," Barritt said.

When informed that that is precisely the position many Republicans in Vermont have taken in opposing a vote-by-mail proposal, Barritt burst into mortified laughter.

"Oh no!" he cried through his cloth mask.

Such is the muddled state of the debate over mail-in ballots in Vermont, a confounding discussion rife with competing claims, speculative predictions and increasingly partisan crosscurrents.

Secretary of State Jim Condos, a Democrat, wants to mail a ballot to every registered voter for the November 3 general election to limit the number of people who turn up at the polls.

Voters would be able to return the ballots by mail, drop them off at their town clerk's office or hand-deliver them to a polling place on Election Day.

Proponents, including the Vermont Democratic Party, argue that voting by mail does not impede democracy yet will keep down the number of voters physically present at the polls, thus protecting them from spread of the coronavirus during one of the most consequential elections in memory.

The Vermont Republican Party argues that doing so could lead to voter fraud, calling the push for mail-in voting "clearly a power play by the Vermont Democratic Party to boost their vote counts."

Republican Gov. Phil Scott has also expressed doubts but says he's merely pining for a "normal" in-person election and believes that Condos is opting for mailed ballots too quickly. Scott has also suggested it is inappropriate for people on the ballot — including Condos and himself — to decide on voting methods.

While everyone involved says the debate shouldn't be partisan, lawmakers acknowledge it has become exactly that.

After empowering Scott and Condos to decide jointly on voting methods in 2020, lawmakers are now on the verge of breaking the stalemate between the two men by removing the governor from the equation.

On Tuesday the Vermont Senate advanced a bill largely along party lines to give Condos sole authority to make election decisions this year. After a nearly two-hour debate, the Senate voted 21-7 in favor of the bill. All six Republicans in the chamber voted against it, as did Sen. Bobby Starr (D-Essex/Orleans), who said he felt the Senate was "overreacting."

If passed Wednesday, June 3, as expected, the bill would still need the approval of the House of Representatives.

Scott has signaled he'd be happy to be stripped of the shared power to decide how Vermonters will vote, claiming he never wanted it in the first place.

"This bill simply takes him at his word and simply removes him from the process," Sen. Jeanette White (D-Windham) said during Tuesday's debate.

The argument in Vermont is convoluted partly because the divisive national debate is beginning to bleed into the local one, according to Matt Dickinson, a political science professor at Middlebury College.

Conventional political wisdom holds that vote-by-mail measures help Democrats and hurt Republicans. President Donald Trump claimed as much when he opined in April that if such efforts succeeded, "you'd never have a Republican elected in this country again." The Republican National Committee is suing states that have proposed expanded vote-by-mail measures, most recently California.

Sen. Becca Balint (D-Windham) said Tuesday it was unfortunate that what she called Trump's string of lies and misleading claims had recently turned to a "fear-based argument" of "rampant, widespread voter fraud, which is not actually a thing."

"The real fraud is this fallacy that there's rampant voter fraud, and it appears every election like a bad rash," Balint continued.

But the political calculations behind the mail-in-voting debate may be detached from the facts, Dickinson said.

It is commonly held that even a seemingly small barrier to voting — like being required to physically show up at a polling place — poses more of a hardship for someone working two jobs or who needs to pay a babysitter than it does for a retired person of means. Remove that or similar barriers to voting, and many predict more Democrats will turn out.

"The interesting thing, from the political science perspective, is we don't have any evidence that's true, at least not nationally," Dickinson said.

Researchers found that mail-in balloting increased voting rates by about 2 percent but did not favor one party over another. click to tweet

He pointed to an April 2020 Stanford University study that analyzed three states — California, Utah and Washington —where mail-in balloting had been phased in county by county, allowing researchers to compare the differences between those that had made the change and those that hadn't. Five states, Oregon, Washington, Utah, Hawaii and Colorado, have mail-in voting, while California gives the option to counties.

The study found that mail-in balloting increased voting rates by about 2 percent but did not favor one party over another, he said. The researchers reported that "vote-by-mail has no apparent effect on either the share of turned-out voters who are Democrats or the share of votes that go to Democratic candidates."

In fact, when it comes to a state like Vermont, the opposite of the conventional wisdom may be true, Dickinson said. The claim of Democratic advantage is based in part on the notion that barriers to voting disproportionately affect minorities, who tend to vote Democratic. In Vermont, mail-in voting might actually increase turnout among lower-income, less-educated white voters, many of whom live in rural areas and vote Republican, Dickinson said.

"We don't have a lot of racial minorities, so here it's not quite the same logic," Dickinson said.

Senate Minority Leader Joe Benning (R-Caledonia) made a similar case last week, arguing that he opposed the mail-in voting not because it would harm Republicans, but because it was unnecessary.

"As a Republican from a rural district, a mail-in ballot system is probably going to help my party better than it will other parties," Benning said.

Benning said he'd been in touch with his town clerk in Lyndon, who was against mail-in voting because the existing absentee ballot system could address people's health concerns. The clerk, Dawn Dwyer, confirmed that she felt a better system would be to mail all voters a postcard reminding them they can request an absentee ballot if they choose. State elections officials are planning to do just that for the August 11 primary.

Benning said he knows the "excuse" for the plan is the pandemic, but he said the state's existing absentee ballot system would appear to be the cure.

"I'm looking at this saying, 'Why is this necessary?'" Benning said.

There are a few reasons Republicans are fine with boosting the use of the absentee balloting but hesitant to embrace mail-in voting, sometimes referred to as "universal mail-in voting."

One is cost. While federal coronavirus relief funds would foot the $3 million price tag of switching to a mail-in-voting system this year, South Burlington City Clerk Donna Kinville said she worries about the practice becoming routine and local jurisdictions being forced to pick up the tab in future years.

Kinville acknowledged that many of the 246 town clerks in Vermont may be in favor of switching but said most are from small towns where anomalies would be easier to detect. "There is a definite urban-rural divide on this issue," she said.

In more heavily populated communities such as South Burlington, which has 16,000 registered voters, the large number of ballots would make it more difficult for clerks to spot fraud, Kinville said. And fraud does happen, she said, recalling the time she caught three members of a household registered in her city voting by absentee in both South Burlington and Burlington.

Vermont's director of elections and campaign finance, Will Senning, has called instances of absentee ballot fraud in the state "infinitesimal."

While Kinville acknowledged that the case she cited could have been an innocent mistake, she asserted that mailing ballots to the entire voter roll would dramatically increase the number of ballots sent to the wrong address and increase the chances of mischief.

"It's going to be mass confusion," Kinville said.

In the debate Tuesday, Benning implied as much, calling it unwise to mail ballots "willy-nilly" to inaccurate voter checklists instead of requiring people to ask for them.

Instead of a system that works fine now, "we literally let loose potentially 300,000 to 500,000 live ballots and expect it all to work out perfectly fine," Benning said.

The balance of party power in the Vermont House may make the issue more charged than it would otherwise be, Dickinson said.

Republicans hold just 43 seats in the 150-member chamber, but that has been enough — with the help of independents and breakaway Democrats — to uphold at least one gubernatorial veto this year. The vote highlighted how even a small turnover could have a profound impact on the power dynamic in the Statehouse.

While there is certainly self-interest in the calculations of politicians, the mail-in-voting debate isn't strictly about strategic electoral gain, Dickinson said. There are fundamental philosophical differences between the parties on the question of how much onus should be placed on individual citizens to participate in democracy, he said.

Back in South Burlington, voter Ken Perrotte strode away from his polling place wearing his mask. He said he felt completely safe attending in person, even at the age of 80.

In November, however, when lines are likely to be longer, he and his wife, who has health issues that make it hard for her to stand for long periods, will almost certainly vote by absentee — or mail-in — ballot.

While the divide between the two parties may be in part philosophical, Perrotte, a retired high school teacher, still believes Republican opposition to mail-in voting is more calculated than that.

"They know that if everybody can vote, and they make it real easy ... it's not going to be very successful for them," Perrotte said.

The original print version of this article was headlined "One Person, One Stamp | Pandemic sparks mail-in-voting plan — and a partisan rift"

Calls To 'Rebuild' Country at Independence Day Protest in Burlington

Home on the Range: Drink Your Vegetables
Top Stories

Shelburne woman was active in her community, church and local schools