Before she could similarly indulge, Valori Sears of Portland, Maine, angled her phone camera to capture the QR code on a laminated card attached to her table. It took a couple tries to bring up the brewery order form on her phone. She hunched over it, conferring with her silver-haired companion.

After several minutes, he shook his head, rose and headed indoors. Sears kept at it. A few moments later, she looked up and smiled at guests at a neighboring table. "It's exhausting — so many clicks! But it worked," she said.

Her friend, Sears explained, had become frustrated and decided to order the old-fashioned way at the bar. "My kids in their early thirties, they just do it — bang bang," she said. "I think it's good sometimes to be forced to do something like this."

Whether they like it or not, diners are interacting more directly with technology in restaurants today than they did two years ago. Ideally, tech solutions make restaurants' work more efficient and the dining experience smoother. But restaurateurs tread a fine line: balancing the need to automate with customers' expectations and comfort level.

A January piece in Restaurant Dive, which covers industry news and trends, captured the challenges of that balance. "Sit-down restaurants have traditionally abstained from digital innovations and other kinds of consumer-facing technology," Emma Liem Beckett wrote, "out of fear that these changes could cheapen the diner's experience."

The pandemic changed that.

The pivot to takeout service drove many restaurateurs to initiate online ordering systems. Now, they are using every tool they can to meet a voracious appetite for on-site dining that has rebounded faster than the capacity of short-staffed restaurants. Tech can also help reduce wasted time and ingredients — a boon to restaurateurs who are dealing with skyrocketing food costs and the need to match competitive pay.

Even where servers still take orders table-side, menus can be delivered via customer phones or wall monitors, cutting down on the trips to each table. Paper pads have been replaced by electronic tablets or handheld devices that zap orders for fettuccine Alfredo or chicken korma directly to a screen at the appropriate cooking station in the kitchen. At the end of the meal, the same handheld devices can take a credit card payment at the table, or customers can pay by scanning a QR code on a printed bill.

At Pro Pig Brewery, a food runner arrived at Sears' table with two beers within five minutes of her successful order. The delivery was followed closely — and a little sheepishly — by Sears' companion; the electronic order had arrived before he even made it to the front of the line at the bar.

Pro Pig Brewery manager Kirstyn Quinn said she pitched the QR ordering system to her bosses in May and rolled it out later that month. Unlike the restaurant side of Pro Pig's operation, the brewery traditionally has not had table service. During peak tourist season, Quinn said, a long line often stretched out the bar door.

"Especially after the pandemic, people were wanting to keep their distance, and we really wanted to avoid the bottleneck situation," Quinn said.

She's happy with the results of the trial. While some customers still order at the bar, most use the QR system. Now, "we can do more [orders] more efficiently," Quinn said, noting that the technology has eliminated the need for a third bartender. Like every other restaurant in Vermont and nationwide, Pro Pig has struggled to fill empty positions; staffing difficulties have kept it closed two days a week, Quinn said.

An unexpected benefit of the new system is that it gives bartenders more time to answer questions about the beer list and Pro Pig's brewing process, Quinn said. They can chat while filling electronic orders for a runner to take outside.

And, Quinn added, the total on the average check has increased. In the past, the line might have deterred customers from ordering one more beer. Now, she said, "It's just a click on your phone, and it comes right out."

While new ways to order and pay are most visible to the public, restaurant owners and managers deploy technology for everything from hiring and scheduling shifts to tracking menu performance and ordering ingredients. 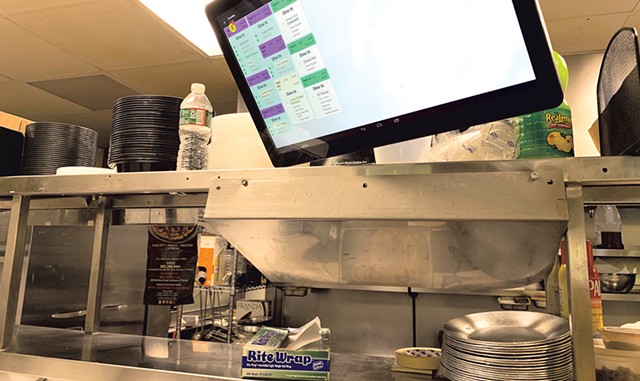 "My team can take and do inventory on their phones, and I can review and approve invoices from anywhere on my phone," said Domenico "Mimmo" Spano, owner of Mimmo's Pizzeria & Restaurant locations in St. Albans, Essex Junction and South Burlington. "Everything is digital. Pretty soon we're gonna make digital pizzas."

That's not happening yet, but there's plenty of other digital activity in the kitchen. During a recent lunch hour at Mimmo's in South Burlington, screens at four different stations displayed a steady stream of orders as they came in online, via the main register or servers' handheld devices.

A Tinker Bell trill alerted cooks to each new order, which changed color on the screen as time elapsed. When cooks finished a dish, they double-tapped the order. Online takeout customers automatically received a text notifying them it was ready, and staffers packed it up.

Working on some calzones, cook Noah Allyn explained that in the past a printer churned out paper tickets for each order that he had to pull off and read. He appreciates the greater ease of reading the screen. With the color coding, "you can just glance at it and see where you're at. I'm blind in one eye," Allyn added.

While technology is a big presence in Mimmo's kitchen, Spano doesn't want it to tentacle into every aspect of his business. Mimmo's servers still bring printed menus to each table before inputting orders for meatball subs and balsamic chicken salads into their handheld devices, in keeping with the owner's belief that diners expect and deserve a human touch.

Topher Lyons, owner of Trail Break Taps + Tacos in White River Junction, concurred. "People go out to eat to have interaction and engagement," he said. "They want the chatter. To be a regular somewhere means having rapport with the staff."

Lyons is far from a Luddite. He invested in an electronic ordering system when he opened, about four years ago, and has gradually added more features. The startup hardware bill was about $10,000, he said, and he's had to upgrade server tablets once. Total software fees run about $380 monthly.

During the pandemic, Lyons replaced printed menus with tabletop QR codes. After customers view the menu on their phones, servers take orders at the table on tablets.

"I fear losing that hospitality touch," Lyons told Seven Days on a Thursday morning heading into a holiday weekend. "I don't think I'd be interested in owning a restaurant at that point."

Three employees had quit that week, and another three had called in that morning to say they would miss upcoming shifts.

"I think people are looking for technology to offset some of the frustrations," Lyons said. His dream technology would clone his best employees, he joked.

In real life, electronic menus and ordering have helped streamline workflow. Digital menus allow real-time updates — if, for example, supply-chain problems were to prevent the delivery of duck wings for Trail Break's maple sambal wings or jackfruit for its pineapple-braised jackfruit burritos. 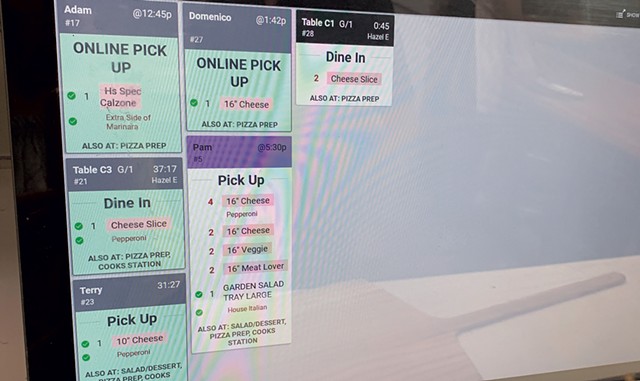 But technology can also precipitate new problems. Online takeout ordering saves phone time, but Lyons said he often has to shut it down because the dining room is so busy. Then people start calling, and, he admitted, "We just take the phone off the hook."

At Foam Brewers and its sister restaurant, Deep City — both on the Burlington waterfront — co-owner Jon Farmer said he is constantly reevaluating how best to leverage technology.

Both operations introduced electronic menus accessible by QR code during the pandemic, but Deep City recently reinstated paper menus. "We want to create a community-like atmosphere and good conversation," Farmer explained. "You don't pick up a piece of paper and get distracted by Instagram."

On the Foam side, Farmer said, the volume of customers on busy weekends obliged the team to reconsider its stand against TV-like wall monitors displaying tap lists. As at Pro Pig, Farmer said, they have found that the screens free up bartenders to have "a real conversation about the beer" rather than just rattling off a list.

Farmer is finessing the software so that staff members can update the menu at any time from their phone. He tested this system recently for Foam's Funk on the Water festival. With a roster of 75 beers from 25 breweries, many attendees were interested in specific beers. Farmer set up a way for them to register for text updates based on a list he updated as soon as fresh kegs were tapped.

"I need a robot who just comes in and goes to work." Debra Maisel tweet this

Not all restaurateurs have embraced technology. On the other end of the digital spectrum is Revolution Kitchen, on Center Street in downtown Burlington, which doesn't even have a computerized sales register. "We're in our sixties," said Debra Maisel, who owns the restaurant with her husband, Peter.

The couple did accept online takeout orders early in the pandemic, when it was just the two of them cooking. "That was the best thing we ever did, because you don't have to answer the phone," Debra said.

The flip side of the convenience was that orders came in so fast and furious, they often found themselves in the weeds. "I'm fucking Lucy popping the chocolates in my mouth," Debra said, referring to the iconic "I Love Lucy" episode in which a candy production line overwhelms Lucy.

The Maisels are back to in-person dining three nights a week — by phone reservation only. The restaurant is short-staffed, and those days are exhausting. "Three days a week, we pack it in," Debra said. "We have to disappoint a lot of people."

What she really wants from technology, Debra quipped, is robots.

"I need a robot who just comes in and goes to work, and I don't have to ask how they're feeling," she said. "I love people and how my waitstaff treat the customers, but it'd be great if I could have someone who'd prep the food, cook the food, make the desserts and wash the dishes — even replace my husband!"

The original print version of this article was headlined "Bigger Bytes"